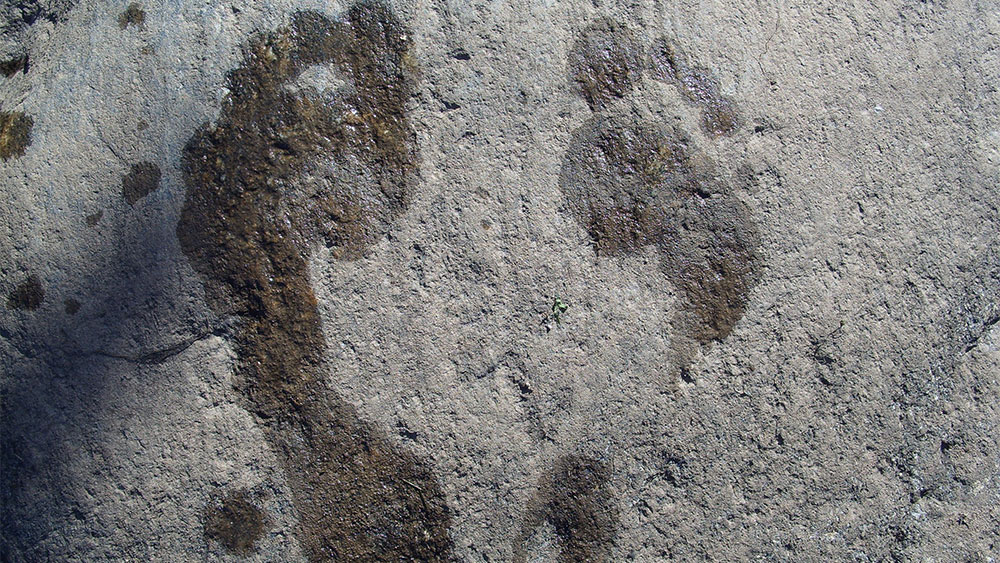 Both creationist and uniformitarian scientists agree that these tracks were made during the Ice Age, although they disagree about when the Ice Age occurred. Creationists think these footprints are just a few thousand years old. However, evolutionists think the tracks are more than 10,000 years old, because they believe the wet conditions needed to form and preserve the footprints have been absent from the Great Salt Lake area for at least that long.


People appear to have been walking in shallow water, the sand rapidly infilling their print behind them—much as you might experience on a beach—but under the sand was a layer of mud that kept the print intact after infilling.1

The Utah tracks are similar to other human footprints preserved in White Sands National Park, New Mexico, where tracks were formed on the edges of what was once a shallow lake.2 They form a 1.5 kilometer-long (0.9 mile) trail, the longest trail of fossilized human footprints known to exist. Like the Utah tracks, the New Mexico tracks were made at a time when White Sands was wet enough for the tracks to be formed in soft sediment. These tracks are also thought to have been made during or near the end of the Ice Age.2 In fact, other human and animal Ice Age tracks have been discovered in Australia,3 Canada,4 South Africa,5 Chile,6 and Saudi Arabia.7

Clearly, modern desert areas were much wetter during at least some parts of the Ice Age, and the creationist Ice-Age model offers a better explanation. Although mainstream geologists claim there have been many ice ages, there is strong geologic evidence for only one ice age.8 Creation scientists think the Ice Age was the direct result of the Genesis Flood approximately 4,500 years ago. ICR scientists think rapid seafloor spreading during the Flood greatly warmed the world’s oceans.9 The oceans stayed warm for hundreds of years, causing intense evaporation from the ocean surface. This increased atmospheric moisture caused heavy snowfall at high latitudes and on mountaintops, but it also caused increased rainfall in other locations, as creation researcher and retired NWS meteorologist Michael Oard explains:

Such a unique Ice Age climate would cause much more precipitation all over the earth, simply because of the greater evaporation from a warm ocean. Furthermore, this precipitation would be distributed differently than it is today. This [Ice Age] climate has the potential to cause copious precipitation in currently arid and semi-arid areas, such as the southwest United States.10

The same would likely have been true of the Middle East,11 which may help explain why both the land of Egypt and the area around the Dead Sea are described as “well watered”12 at the time of Abraham, who was born about three hundred years after the Flood.13 Likewise, the Sahara desert used to receive abundant rainfall.14 Even by evolutionary reckoning, one such recent wet period lasted several thousand years.15

In uniformitarian thinking, abundant rainfall during the Ice Age is surprising. Both cold “ice ages” and the warmer “interglacials” in between are expected to be dry. The ice ages themselves are expected to be very cold, which would cause a dryer ice-age climate, since the maximum amount of moisture that can be contained in cold air is much less than that which can be contained by warmer air. Likewise, today’s climate is thought to be one of many interglacials between ice ages. Since the American southwest, in the supposed present-day “interglacial” is very arid, uniformitarians would expect it to have also been arid in past interglacials, since they believe “the present is the key to the past.”

Some evolutionary scientists claim the Sahara alternated between wet and dry periods every 20,000 years, and they attribute this to monsoon activity ultimately driven by subtle changes in the shape of the Earth’s orbit around the sun.16 However, this is not at all a convincing explanation. Changes in sunlight due to Earth’s orbital motions are so tiny that it is hard to see how they could cause such drastic climate change,17 especially drastic climate change that repeats every 20,000 years! Worse yet, this explanation assumes the validity of the astronomical or Milankovitch ice age theory, and original ICR research has revealed that the evidence for this theory, even by evolutionary reckoning, is extremely weak at best and non-existent at worst.18

Despite evolutionary hand-waving, wet Ice Age deserts are extremely difficult for evolutionary scientists to convincingly explain. However, the Bible’s real history makes much better sense of both these wet deserts and preserved Ice Age footprints.

*Dr. Hebert is Research Scientist at the Institute for Creation Research and earned his Ph.D. in physics from the University of Texas at Dallas.
More Human Body