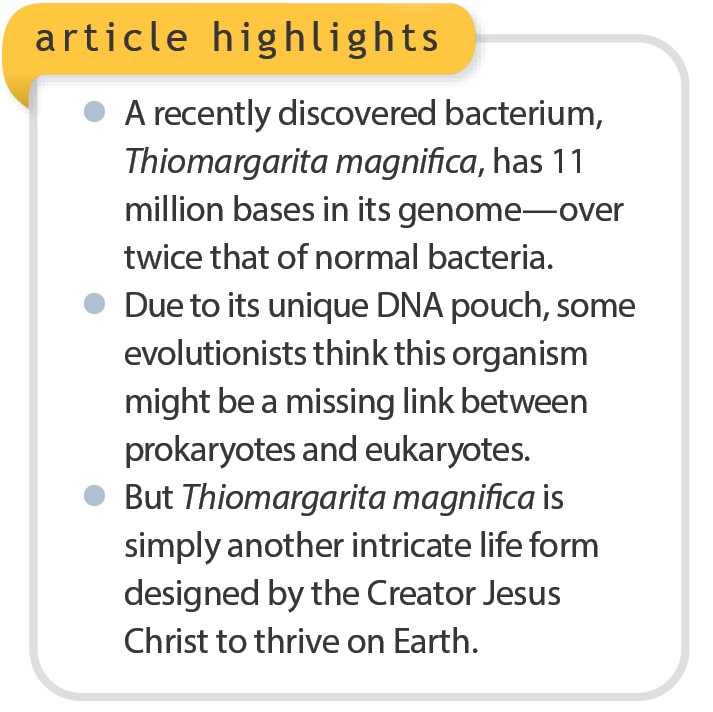 Bacteria are tiny single-cell organisms that show a huge range of metabolic and genetic variation, and also exist in a wide array of shapes and sizes. Bacteria, which are classed among the life forms called prokaryotes, are a part of the three domains of taxonomy, the other two being Eukarya (organisms with nuclei) and Archaea (the second group of prokaryotes). Like bacteria, archaea have no nuclei, but they don’t cause disease and have very different cell walls.

Some people call bacteria “simple,” but this is incorrect.1 All bacteria have very complex cellular systems, and some are even photosynthetic.2 In fact, many bacteria are symbionts (interreacting with plants and animals) and are essential to life on Earth.

In early 2022, a huge bacterium was discovered that measured at just over three-quarters of an inch long (about 2 centimeters). It looks like a thin string and resides among mangroves in the Caribbean. Researchers named it Thiomargarita magnifica.3

There is nothing simple about this bacterium. Scientists “found the genome [the total genetic material within the cell] was huge, with 11 million bases harboring some 11,000 clearly distinguishable genes. Typically, bacterial genomes average about 4 million bases and about 3900 genes.”3

Some evolutionists have suggested that T. magnifica might be an evolutionary link between bacteria (prokaryotes) and cells that have a membrane-bound nucleus (eukaryotes). People, fungi, plants, and animals are all made up of eukaryotic cells.

The recently discovered Thiomargarita magnifica bacterium is three-quarters of an inch long. Its single-cell filaments are visible next to a dime.
Image credit: Copyright © 2022 American Association for the Advancement of Science. Used in accordance with federal copyright (fair use doctrine) law. Usage by ICR does not imply endorsement of copyright holder.

T. magnifica is suggested as a missing link because this huge bacterium’s DNA is enclosed inside a membranous pouch, just as eukaryotic cells have a very complex membrane-bound nucleus containing DNA. However, there are other ways to view this structure without invoking evolution. For example, having the cell’s genetic material concentrated within a small area makes sense from a creation/design standpoint. Indeed, according to a Science article:

Protein production factories called ribosomes were inside the DNA-filled sac as well, likely making the translation of a gene’s code into a protein more efficient. “Separating genetic material from everything else allows more sophisticated control and greater complexity,” says Chris Greening, a microbiologist at Monash University, Clayton.3

In addition, T. magnifica has a large water-filled pouch that takes up over 70% of the cell’s volume. It pushes the cell’s contents against its outer wall. “The bacteria’s essential molecules can still diffuse in and out because ‘only [along the edge] is the cell living,’ says [Verena] Carvalho, [a University of Massachusetts microbiologist] who worked on this group of bacteria.”3 This is a critical design feature that evidently maintains the metabolic activities of the bacterium and has nothing to do with random evolution.

Creationists view this unique bacterium just as we do Tiktaalik, an extinct lobe-finned fish that was a former missing link candidate.4 Instead of representing a transition between fins and legs, Tiktaalik’s features would have worked well in the marshy interface between open water and land in the pre-Flood world, making it well-suited to this transitional zone.

The same might be said on a smaller scale for Thiomargarita magnifica. Instead of being a “microbe [that] blurs the line between prokaryotes and eukaryotes,”3 it was specifically designed by the Creator to proliferate in a unique ecological niche among the tropical mangroves.