Dozens of technical reports show original biochemistry within the bodies of long-buried fossils, and the reports just keep coming. Three new reports give occasion to reconsider the age assignments for all these fossils. After all, none of them comes with a death-date label. But the biochemicals they harbor resemble timers that should have elapsed long ago unless these fossils were deposited thousands of years ago, not millions.

The biochemicals they harbor resemble timers that should have elapsed long ago unless these fossils were deposited thousands of years ago, not millions.

First, researchers describe original fat in a fossilized bird gland from Germany’s Messel Shale. Today’s birds use preening glands near their tails to treat their feathers with a weather-proofing oil. Without the gland, a neck flexible enough to reach the gland, an adequate beak to collect the gland’s lubricant, and the instinct to preen feathers, then a bird’s feathers would get misshapen, dry, and cracked, making flight impossible.

Deemed “the oldest lipids ever recovered from a vertebrate,” the still-yellow oil-making gland suffers a “48 million year” label.1 Lipids include fats and oils. Why didn’t bacteria reach and devour it in all that supposed time?2

For the second fossil find, an international team of paleontologists described original pigments in a turtle fossil from the Eocene Fur Formation in Denmark. The study authors wrote, 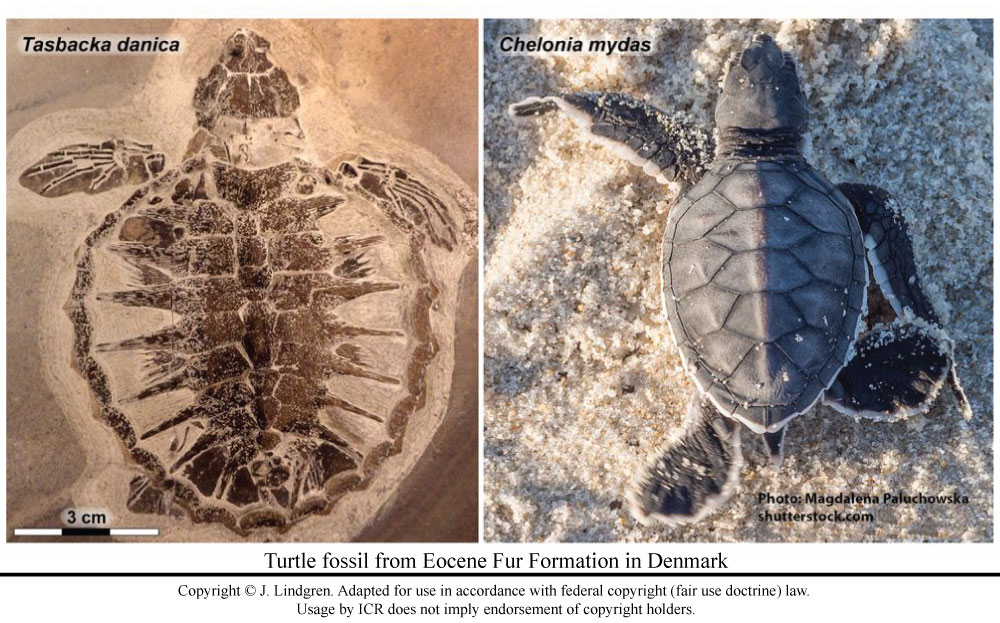 They did, indeed, find direct evidence of pigments. They used immunohistochemistry and electron microscope-based elemental analysis to confirm that the fossil’s dark exterior came from the same biochemical that makes up living baby turtles’ dark skin. But they could not have found direct evidence that “adaptive melanism…had evolved,” since they did not directly see it evolve. Their conclusion appears to be a speculation based on an assumption. This fully pigmented baby turtle appears in its completed form, just like modern turtles, with no evolutionary process in sight.

Nor did the fossil convey “direct chemical evidence” of 54 million years. That’s impossible. Science cannot directly measure the age of any artifact. The best science can do is to use a proxy for age—some process with a regular decay rate—and assume that the specimen being dated has been decaying the same way in the past.4 For example, biochemicals decay at regular rates under ideal conditions. They can last thousands of years, but not a million, and certainly not 54 million.

Nor did the fossil convey “direct chemical evidence” of 54 million years. That’s impossible. Science cannot directly measure the age of any artifact.

Third and last, German and American researchers extracted the two main pigments known to add color to modern bird eggs from fossil eggs. The team “reliably identified” biliverdin and protoporphyrin in Cretaceous fossil eggs from three separate locations across China. They determined the eggs were originally turquoise in color. The fossil pigments even had the same exact molecular mass as modern standard pigments, as though almost no degradation had occurred. But how could that be true after “at least 66 million years?”5

As though they heard that very question, another group led by University of Manchester researchers admitted earlier this year that biochemicals could not possibly last that long. Their report, published in the Proceedings of the Royal Society B, argued that proteins sequenced from dinosaurs could possibly reflect lab contaminants.6 The study authors wrote,

Schweitzer et al. reported [Science, 2005, 307:1952] on the startling discovery of soft-tissue preservation in the femur of a Tyrannosaurus rex, apparently preserved for over 68 Myr, a length of time vastly greater than thought possible given the experimentally measured rates of decay for the component structural proteins, particularly collagen.6

Protein decay experiments have determined 68 million years as a length of time “vastly greater than thought possible” for proteins to last. Their solution to this dilemma was to claim contamination, despite the difficulties that story raises. Contamination would require a highly unlikely scenario: Detection devices from several different labs somehow all retained enough residual protein from prior samples even after the standard thorough washing procedures for the high-tech equipment. Plus, what are the odds that each of those supposedly contaminant samples just happened to mimic likely dinosaur protein sequences? In the end, protein contamination can’t explain lipids and pigments either.

Biochemicals decay at regular rates under ideal conditions. They can last thousands of years, but not a million, and certainly not 54 million.

Secular paleontologists make good observations of original biochemicals in fossils, but they have great difficulty convincing other scientists that such fragile materials could last millions of years. On the other hand, those who claim contamination must explain scores of original biochemicals from scores of fossils from all over the world and the dozen or so different high-tech lab techniques that have repeatedly verified those finds for dozens of years.7

One harmonious resolution seems to evade all these secular researchers. If these fossils were deposited thousands of years ago, not millions, then experiments confirm they could still carry original biochemicals, and observations confirm that some actually do still carry remnants of their ancient carcasses.