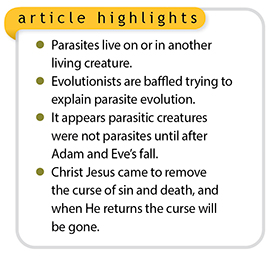 Parasites are a unique form of life in today’s world. These invertebrates come in all shapes and sizes, from single-cell animals (e.g., Plasmodium that causes malaria) to a tapeworm (Polygonoporus giganticus) that can grow up to 131 feet! Despite these varied forms, parasite origin and macroevolution are strange and unknowable in the naturalistic worldview.

In 1993, two evolutionists stated, “Parasites are still an enigma.”1 Not much has changed for the naturalist since then. “Hence, tempo and mode of host-parasite co-evolution at the macro-evolutionary scale remain a major challenge to understand.”2 Evolutionary biologists Eric Loker and Bruce Hofkin stated, “Macroevolutionary patterns among parasites are not yet very clear.”3 The origin of these fascinating creatures is still a puzzle for secular zoologists.

What is the origin of parasites? Were Adam and Eve infected with them at creation?

In the biblical model, creation occurred thousands of years ago, and God saw that everything was very good (Genesis 1:31). There were no parasites, not like we have today. But in Genesis 3, God’s creation was corrupted when Adam and Eve fell (Genesis 3:6), and God cursed His creation, the full force falling on humans and all their dominion (Genesis 3:17-19). God drove our first parents from the Garden to a land where they experienced sorrow and death. There, parasites made their appearance. 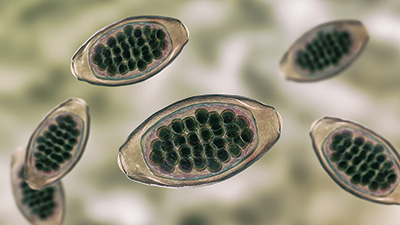 Before the Fall, parasites were not yet parasites. Rather, they were most likely free-living creatures independent from Adam, Eve, and the animals. An evolutionist stated, “Parasitic species have retained some morphological [structural] resemblance with their free-living counterparts.”4

In addition, the transition to parasitism doesn’t require long periods of evolutionary time: “In fact, free-living species could become parasitic without substantial anatomical or physiological changes.”5

In all likelihood some of these invertebrates lived together before the Fall, providing benefits to each other—a state called mutualism. But when God cursed the earth, these creatures probably experienced changes in their body systems and became parasitic.6

After the Fall, Adam and Eve and their descendants were exposed to everything from pathogenic bacteria and harmful mutations—including cancer—to poisonous plants, harmful insects, and parasites. In this good-yet-groaning world (Romans 8:22), parasites in particular remind us that the curse (under the law of sin and death described in Romans 8) is operating unchecked today. But we can rejoice that someday death will be swallowed up in victory by the Author and Giver of life (1 Corinthians 15:54)!