Ice Cores, Seafloor Sediments, and the Age of the Earth, Part 1 | The Institute for Creation Research
Skip to main content

In an attempt to learn about past climates, scientists have drilled and extracted cylindrical cores from the Greenland and Antarctic ice sheets. Because of the great thickness of these sheets, the cores can have combined lengths of thousands of meters.

Permanent ice sheets probably did not exist in the pre-Flood world, but if they had, they almost certainly would have been destroyed during the great Flood. Hence, today’s high-latitude ice sheets have only had about 4,500 years—the time since the Flood—to grow to their present sizes.

Yet secular scientists assign very old ages to the ice deep within these cores. For instance, ice near the bottom of two Antarctic cores, the Vostok and EPICA Dome C cores, is said to be 400,000 and 800,000 years old, respectively. Clearly, these vast ages are incompatible with the Bible’s short timescale. Do ice cores present an unanswerable argument for an old earth?

It should first be noted that vast amounts of time are not needed for the formation of thick ice sheets. Even if one grants the assumption that average high-latitude snowfall rates have been roughly constant throughout time, the Greenland ice sheet would need (in the absence of melting) only about 5,000 years to form, and the Antarctic ice sheets would require only about 10,200 years.1 Although these numbers are greater than the roughly 4,500 years since the Flood, they are easily compatible with the biblical model that predicts much higher snowfall rates during the post-Flood Ice Age.2

So the issue is not whether vast amounts of time are necessary for thick ice sheets to form—they clearly are not needed. Informed secular scientists know this but would still argue, based upon their models of Earth history, that the ice sheets have nevertheless existed for millions of years. So the key question is, “Have secular scientists really identified hundreds of thousands of annual layers within these ice sheets?”

Snow and ice in the high latitudes generally do not melt even during the summer months—they accumulate over time. Layers of snow fall and are covered by subsequent layers. As layers of snow accrue, their vertical thickness increases, and the snow transforms into ice as the air is squeezed out.

This ice contains layers that are distinct from one another. For instance, depth hoar complexes can be identified and are used to assist in the dating of ice within a core. Depth hoar is essentially low-density snow characterized by large ice crystals (often cup-shaped) and can form in clear, calm weather when the temperature above the snow changes rapidly with increasing height. If this clear weather is followed by a large storm, then a crisp, firm surface called a wind crust or wind slab can form above the depth hoar. Such conditions can occur repeatedly, usually during the late summer/autumn months, resulting in a depth hoar complex.3

Can scientists determine the elapsed time since a given ice layer was deposited by visually inspecting and counting presumed annual layers within the ice core? It may appear straightforward, but in actual practice there are a number of complicating factors. 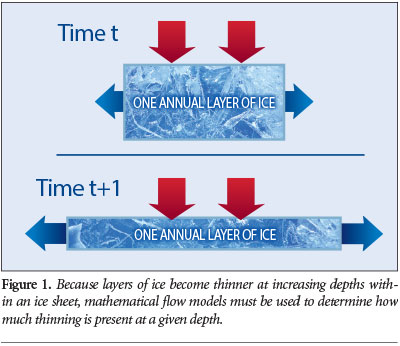 Layering becomes more indistinct at greater depths within the core. Hence, scientists cannot simply visually examine and count the deeper layers if they want to extend the chronology into the more distant past. Nor can they simply guess the locations and number these deeper layers based on corresponding layer thicknesses higher in the core. This is because the weight of the overlying ice causes the layers to be forced downward and become progressively thinner at greater and greater core depths (Figure 1).

Hence a theoretical flow model is needed to convert a measured distance down the length of the core into a calculated time. In fact, flow models are actually the most common method of dating ice cores.4 In constructing their flow models, secular scientists assume that the ice sheets have been in existence for millions of years, and that they have maintained more or less the same heights for all that time. In other words, they base their models on the belief that the ice sheets have been in a nearly “steady state” of equilibrium for millions of years.5 These assumptions naturally yield vast age assignments and an assumed extreme thinning of the deeper layers.

Creation scientists Larry Vardiman and Michael Oard have constructed their own flow models—models that assume the ice sheets began forming shortly after the Flood about 4,500 years ago.6,7 In a creation-Flood glacial-flow model, one would expect that such drastic thinning with depth would be absent. In fact, in creation-Flood ice flow models, these lower layers might actually be quite thick.

Although uniformitarian scientists would acknowledge that their flow models implicitly assume an old earth, they would argue that this assumption is justified, partly because the ages assigned to the ice cores agree with the expectations of a popular theory for ice ages called the astronomical or Milankovitch theory. According to this theory, ice ages are “paced” by subtle increases and decreases in northern high-latitude summer sunlight. These variations are caused by subtle changes in the earth’s motions as it orbits the sun, changes that are thought to take tens of thousands of years. Because secular scientists assume the solar system is billions of years old, they believe they are free to extrapolate these motions backward hundreds of thousands of years into the supposed “prehistoric” past.

Although the astronomical theory is currently popular, it is actually a theory from the 1800s, has a number of serious problems, and was previously rejected by meteorologists long ago.8

To better understand the link between the astronomical theory and the long ages assigned to the ice cores, it is necessary to discuss a topic that on the surface appears to have no connection whatsoever to the dating of ice cores: the chemistry of seafloor sediments.

Much like the technique used in ice core research, scientists drill and extract cores from the ocean floor in an attempt to discern information about past climates. These sedimentary layers contain subtle variations in chemistry, including variations in something called the oxygen isotope ratio, indicated by the shorthand symbol δ18O. 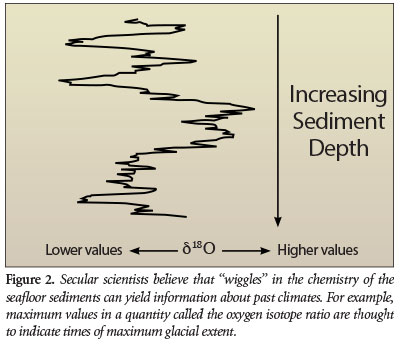 Tiny marine organisms called Foraminifera (forams for short) build shells made of calcium carbonate (CaCO3), a molecule that contains oxygen. These forams use both oxygen-16 and oxygen-18 to construct their shells. When these organisms die, their shells drift downward to the ocean bottom and become part of the ocean sediments. From the remains of these shells, researchers can determine values of the oxygen isotope ratio at different depths within the sediment cores. Secular scientists believe that variations in the δ18O values indicate past changes in climate. When these δ18O values are plotted on a graph, they “wiggle,” increasing and decreasing at various depths within the sediment core (Figure 2). Secular scientists view these oxygen isotope ratios as climate indicators—higher values of δ18O within the sediments are thought to indicate ice ages.

However, serious difficulties arise when attempting to infer past climates from the chemistry of seafloor sediments. The δ18O value of the foram shell depends upon both the seawater temperature at the time the foram shell was being formed and the past δ18O value of the surrounding seawater (also at the time of shell formation). Because δ18O values within the high-latitude ice sheets are much lower than oceanic δ18O values, the growth or melting of these large ice sheets can noticeably affect oceanic δ18O values. Furthermore, seawater temperature at the time of the shell’s formation depends upon not just long-term average temperatures, but also upon local short-term temperature variations in time and space, so it is not obvious how much of the variation in foram δ18O values is due to global average temperatures, how much is due to local temperature fluctuations, and how much is due to variations in global ice volume. For this reason, the secular interpretation of these foram δ18O changes has changed over the years: secular scientists used to believe that variations in foraminiferal δ18O values were mainly indicators of changes in temperature, but now they see them more as indicators of changes in global ice volume. These ambiguities, as well as other complications, make inferring information about past climates from the chemistry of seafloor sediments extremely problematic.9

Despite its problems, secular scientists have become so convinced the astronomical theory is correct that they actually use the theory to “date” the seafloor sediments. This technique is called orbital tuning.10 How does it work? 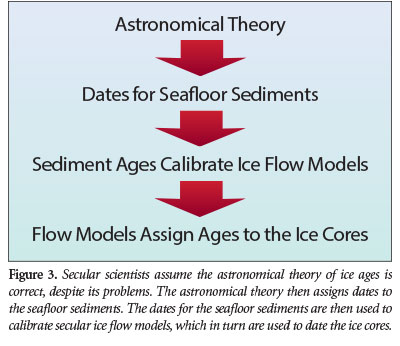 But skeptics might counter that the old-earth assumptions are still justified because hundreds of thousands of annual layers have supposedly been counted, seemingly independent of any questionable model assumptions. The GISP2 core from Greenland is frequently mentioned, since the ice at a depth of 2,800 meters in this core is said to be 110,000 years old. One critic goes so far as to claim that the GISP2 core is the “ultimate proof” that a global, worldwide flood could not have occurred.12

But the critics are mistaken. Even the deep GISP2 core does not demand long ages, and this topic is the subject of a future article.