Ice Cores, Seafloor Sediments, and the Age of the Earth, Part 2 | The Institute for Creation Research
Skip to main content

Many people perceive the vast ages assigned to deep ice cores from Greenland and Antarctica as unanswerable arguments for an old earth. My previous article made a number of points about these ice cores.1

First, theoretical ice-flow models are the most common method of dating ice cores.2 Secular flow models assume that the ice sheets have been in existence for millions of years. Not surprisingly, they assign vast ages to ice deep within the cores. They also predict extreme ice-layer thinning in the deeper parts of the cores, with the deepest layers only being about a millimeter thick. 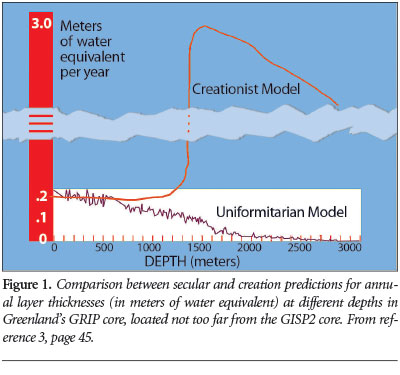 Second, creation scientists have constructed ice-flow models that assume the Greenland and Antarctic ice sheets began forming shortly after the Genesis Flood about 4,500 years ago. Because of their different starting assumptions, these models predict much less ice-layer thinning at depth. In fact, one model predicts deep layers having thicknesses hundreds to thousands of times thicker than those predicted by the secular models.3 The predictions for specific ice layer thicknesses in the different models are contrasted in Figure 1.

Biblical critics respond, however, that some of the ice cores have been dated as very old by simply counting the “annual” layers, independently of old-Earth assumptions. For instance, secular scientists have counted 110,000 supposed annual layers in the uppermost 2,800 meters in Greenland’s GISP2 core.4 Hence one skeptic claimed that the GISP2 ice core is the ultimate proof against Noah’s Flood and the Bible’s short 6,000-year chronology.5 But is this really the case?

Secular scientists used a number of methods to date the GISP2 ice core.4 In the upper 1,500 meters of the ice core, they counted depth hoar/wind crust patterns, a description of which was in my previous article.1

The acidity of snow and ice is generally higher during the summer. These acids make it a little easier for electricity to pass through the ice, corresponding to increases in the ice’s electrical conductivity. Hence, when using the ECM method, jumps in the measured electrical conductivity of the ice are thought to indicate annual summer layers.

In the LLS method, a laser light is either shined directly onto the ice core or onto a sample of water from the ice core. Because dust readily scatters light, a greater fraction of the incoming light will be scattered when greater amounts of dust are contained within the sample. These jumps or spikes in the amount of scattered light are also thought to indicate spring/summer layers.

So how do biblical creationists respond to the vast ages assigned to the GISP2 ice core? Quite simply, secular scientists are over-counting the number of true annual layers. Scientists have repeatedly observed 15 to 16 different depth hoar/wind crust couplet patterns forming per year in central Greenland, and this number is typical.6 Secular scientists have also acknowledged that two such patterns (or groups of patterns) formed during the same year could be mistaken for two separate annual patterns if they were physically separated by a significant depth of snow or ice.7

Moreover, multiple non-seasonal acid peaks can be caused by other factors (such as volcanic eruptions) and have been observed to form within a single year.8 Likewise, over-counting “annual” dust layers can occur, since non-seasonal factors such as dust storms and volcanic eruptions can also result in increased dust content within the ice.9

The skeptic has two immediate objections to this creationist response. First, he would argue that other dating methods can be used as checks to guard against the possibility of over-counting. Second, he would argue that it is preposterous to think that secular scientists could be over-counting by that much: 110,000 years (or more!) compared to 4,500 years? But are these objections valid?

“Checks” Not That Helpful

Explosive volcanic eruptions increase the amount of sulfuric acid in the atmosphere, and these post-eruption acid spikes can be detected within ice cores, as well as volcanic fragments called tephra. If the date of an eruption is known, then this eruption’s volcanic reference horizon within the ice can be used as a check to ensure that the annual layer counts above that specific horizon are accurate.

However, the dates of volcanic eruptions can generally be confirmed by eyewitness testimony for only the last 300 years, with a small number of eruptions that potentially can be dated as far back as 2,000 years.10 So volcanic reference horizons cannot be used as checks for layer counts within the deeper parts of the cores. And it is the deeper layer counts that are in question. Some might argue that radioisotope dating can be used to date older volcanic eruptions, but these dates cannot be confirmed by eyewitness accounts, and regular Acts & Facts readers are well aware of the problems with radioisotope dating!11

Seasonal fluctuations in δ18O values can presumably act as a check to ensure against over- or under-counting these “annual” layers. However, the seasonal δ18O signal disappeared at a depth of only 300 meters within the GISP2 core!4 Hence, measured δ18O values at deeper core depths could not be used to check yearly layer counts.

The ECM and LLS methods could be used intermittently throughout the core, but, as noted earlier, they are clearly not foolproof. Moreover, at deeper core depths, their use was problematic, as discussed below. 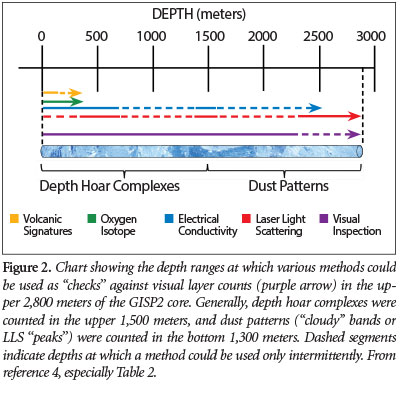 Figure 2 shows that multiple methods could only be used consistently as checks for relatively short sections of the core, and even then these methods were subject to the weaknesses already described.

Over-Counting the Top Half

In the creation-Flood model, the post-Flood Ice Age was a relatively short event, probably lasting about 700 years.12 Since the Flood occurred around 2500 B.C., the Ice Age would have ended roughly 4,000 years ago. Based on δ18O measurements within the GISP2 core, warmer temperatures seem to be fairly constant at depths above 1,500 meters (Figure 3). If this 1,500-meter depth corresponds to the end of the Ice Age, then the true age of the ice at this depth is roughly 4,000 years. However, secular scientists assign an age of about 9,300 years to this ice.13 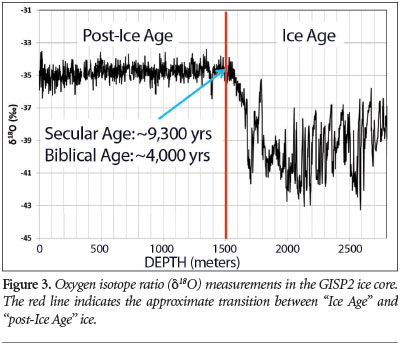 As mentioned above, it is typical for large numbers of depth hoar/wind crust patterns to form within a single year, and widely spaced patterns formed within a single year could be mistaken for separate annual layers. Given the multiple tens of thousands of depth hoar/wind crust patterns that are likely in the top 1,500 meters of the core, a modest fraction of misidentified “annual” layers can easily account for these 5,000 “extra” years.

Over-Counting the Bottom Half

This dust content contributes to over-counting of the layers in a number of ways. First, the increased dust content dramatically decreases the electrical conductivity, further limiting the use of the ECM method in much of the core (Figure 2). Second, while it is true that jumps in dust content in today’s climate usually indicate seasonal changes, it is dangerous to assume the same for the bottom part of the core. These increased, highly variable dust concentrations make it much more likely that secular scientists will mistake short-term increases in dust content (from storms, eruptions, etc.) for seasonal dust variations.

Note from Figure 2 that GISP2 scientists could consistently use only the LLS method at depths greater than about 2,300 meters. But the LLS method was subtly influenced by old-Earth assumptions—four or five measurements were needed to discern a jump in dust content.4 But this raises a question: How closely together should these four or five measurements be made? That depends on how thin one believes an annual layer of ice will be at a given depth. If one is expecting very thin annual layers, he will make these measurements much closer together than if he is expecting thicker layers. But remember that secular ice-flow models predict extreme thinning of the ice at depth, thinning that may be a hundred—or even a thousand—times greater than the thinning expected from a creation-Flood ice-flow model (Figure 1). Because secular scientists believe that deep annual ice layers are extremely thin, they make their measurements very close together. This makes it much more likely that they will mistake short-term “blips” in dust content and read them as seasonal variations (Figure 4 A, B, C).

GISP2 scientists had originally counted 85,000 “annual” layers in the upper 2,800 meters of the core. Moreover, because other methods could not be used in the deepest part of the core, and because even visual detection of dusty bands was difficult at these extreme depths, they were extremely dependent on the LLS method in the bottom 500 meters of this 2,800 meter-long section. These dust-layer counts were obtained with a laser beam that had a diameter of eight millimeters. But based upon another ice core chronology, these scientists had expected the ice at that depth to be 110,000 years old. Because they had initially obtained the “wrong” answer, they re-counted the dust layers in this bottom 500 meters using a much smaller one millimeter-diameter laser beam. Upon doing so, they “found” the “missing” 25,000 years!4 This example dramatically illustrates both the subjective nature of the counting process and the relative ease with which secular scientists can “find” even tens of thousands of “annual” layers deep within the ice cores. Not surprisingly, more than 67,000 of the supposed 110,000 years were found in just this 500 meter-long section!13

In short, no Christian should be intimidated by the vast ages claimed for the ice cores. On the contrary, a number of clues in the ice cores (as well as the seafloor sediment cores discussed in my earlier article) strongly favor the creation-Flood interpretation of the data, and this will be the subject of a future article.

Click here to read “Ice Cores, Seafloor Sediments, and the Age of the Earth, Part 3.”