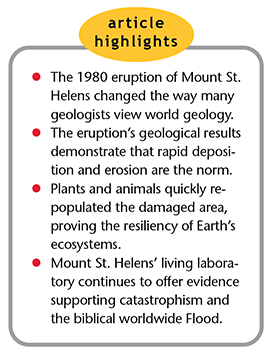 Nothing put a damper on uniformitarianism like the Mount St. Helens eruption on May 18, 1980. That explosion still echoes through the halls of the scientific establishment 40 years later. For nearly 150 years prior to the eruption, strict uniformitarianism reigned supreme in geology. The influence of James Hutton and his concept of deep time had trickled down to even the smallest details. Every geological process was thought to proceed as slowly as those observed today. Erosion and deposition were seen as steady, methodical processes requiring vast amounts of time to make a substantial impact.

In 1980, Mount St. Helens dropped an outdoor laboratory in geologists’ laps, forcing them to accept catastrophic events as major contributors to Earth’s overall geologic story. Many geologists call this actualism as opposed to uniformitarianism.1 They now accept the evidence that catastrophic events make major impacts on the rock record and that the normal everyday processes of deposition and erosion contribute very little.

Mount St. Helens has even impacted the science of biology. Recovery by flora and fauna in the devastated area around the volcano occurred very quickly. Many centuries aren’t required to turn a lifeless terrain into a lush biota filled with life. Plant and animal repopulation is remarkably fast. All of this has implications for the worldwide Flood recorded in Genesis. 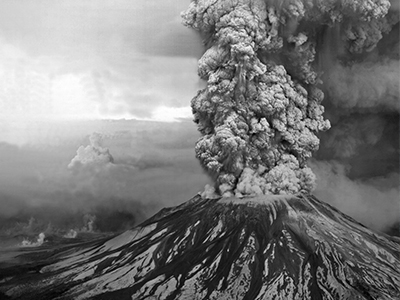 The cause of the sudden shift in thought was scientists’ direct observation of the effects of Mount St. Helens’ volcanic activity. Geologists documented that up to 400 feet of new strata have formed at the volcano since the first eruption in 1980.2 These deposits originated from air fall, pyroclastic flows, landslides, and even stream water. The geologists saw that laminated deposits (thin layers) can be produced quickly. Previously, laminated strata were believed to take many years to form, with possibly one layer laid down each year. We now know this assumption is false. One deposit at Mount St. Helens resulted in the creation of a 25-foot-thick finely laminated unit in a matter of hours!2

New studies show that rapid deposition is the norm, not the exception. Secular science has used the slow deposition of sediments like clay and lime mud (micrite) as an argument for an old earth, claiming that all clays form by slowly settling out of stagnant water. People have been indoctrinated with the notion that enormous periods of time are necessary to explain these thick rock layers.

We do see clay settling out of stagnant water today, but the clay-rich rocks we observe didn’t form that way. Rocks like shale and mudstone often exhibit fine laminations a few millimeters thick. These layers didn’t result from deposition in stagnant water. Recent empirical evidence demonstrates that laminated clays must be deposited in energetic settings by moving water.3 The results match the predictions of creation geologists who interpret clay, which forms mudstones and shales, as rapid deposits that occurred during the year-long Flood.4

A second finding also has uniformitarian geologists bewildered. Although some lime-rich rocks called carbonates have been interpreted as forming in high-energy settings, carbonate mud has always been thought of as forming in “quiescent ocean settings.”5 But laboratory studies show that micrite is also deposited by moving water. Laminated limestones, like laminated mudstones, aren’t the result of a slow settling process, as was previously thought.

According to the authors of a recent study, “these experiments demonstrate unequivocally that carbonate muds can also accumulate in energetic settings.” They added, “Observations from modern carbonate environments and from the rock record suggest that deposition of carbonate muds by currents could have been common throughout geologic history.”6 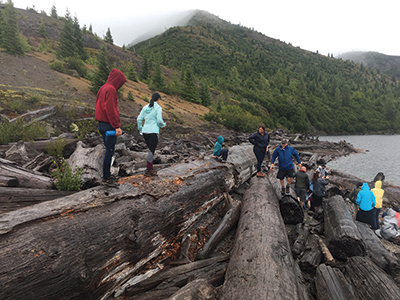 A 2019 tour group walks along the log mat at the edge of Spirit Lake. The trees were torn from the northern slope of the lake by the giant wave generated by the massive landslide that initiated the 1980 Mount St. Helens eruption.
Image credit: Tim Clarey

Mount St. Helens also demonstrated that erosion can be much quicker than previously claimed. The eruption’s steam blast, ash flows, and volcanic mudflows rapidly changed the landscape surrounding the volcano and its waterways. The North Fork of the Toutle River had to carve a new course since the 1980 eruption blocked the original passage with nearly a cubic mile of debris.2

After a small subsequent eruption on March 19, 1982, a mudflow from melted snow and ice flowed down the North Fork of the Toutle River Valley, carving a new canyon up to 140 feet deep.2 This “Little Grand Canyon” is an approximately 1/40th-scale version of Grand Canyon, demonstrating the rapid scouring power of water. Creation geologists frequently use this analogy to explain the rapid formation of the much larger Grand Canyon. Erosion can be fast under the right conditions, and creation geologists believe the global Flood provided ample water to carve canyons and erode mountains in a short amount of time. This was especially true in the receding phase of the Flood as water energetically washed off and through the soft-sediment-laden landmasses into the newly forming ocean basins during continental uplift.

In fact, it’s been well known for decades that even uniformitarian rates of erosion are still so fast that the continents themselves should have been reduced to sea level long ago.7 A recent study confirmed that the average erosion rates of exposed rocks are about 40 feet per million years.8 This would completely erode most continents in less than 50 million years, and yet they still exist.

The 1980 eruption of Mount St. Helens sent the largest landslide ever recorded down the north side of the mountain. Over 3.3 billion cubic yards of rock and ice, moving at speeds exceeding 150 mph, tore the side of the mountain open, unleashing a devastating steam blast. About 25% of this material ended up in Spirit Lake.9

The 680 million cubic yards of material that hit Spirit Lake formed a gigantic tsunami that ripped across the hillsides north of the lake.9 This water wave sheared off an estimated one million fully grown trees near their bases and transported the logs back to the lake as the water receded. Many of these trees have been found floating upright with the root end down. Following a survey of the floating trees in 1985, it was estimated that more than 19,000 upright logs had settled on the floor of the lake.2

Dr. Harold Coffin of the Geoscience Research Institute found that many of the upright trees were randomly spaced, not clumped together, across the bottom of the lake.2 And he noted that many of the trees had settled at various levels in the mud, giving the appearance of deposition at different times.

Creation geologists use Spirit Lake’s floating log mat and sunken logs as an analogy for the likely devastation that occurred during the Flood year. The sunken upright trees are used to explain the numerous polystrate trees often found extending through coal beds. They also help explain petrified forests like the one at Specimen Ridge in Yellowstone National Park. There we find upright trees at different stratigraphic levels that could have formed all at the same time during the global Flood.

Today, 40 years later, a massive log mat remains floating around Spirit Lake. However, if this mat had been rapidly buried by subsequent sediments, it’s likely these trees would have turned into a coal bed. Coal beds also don’t take vast amounts of time to form; they just need the right conditions.

Rapid Recovery of Flora and Fauna 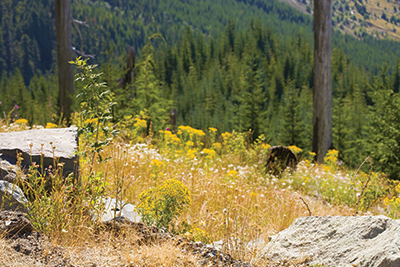 When Noah and his family looked out on the bleak and barren post-Flood landscape, they must have wondered how long it would remain that way. After a natural disaster, creation scientists observe environmental recovery processes and extrapolate to the worldwide reclamation after the Flood. Mount St. Helens continues to be a scale model of the world God destroyed and reformed as a result of His judgment.

Scripture states that “all the fountains of the great deep were broken up” (Genesis 7:11) as the Flood began. This breakup most likely included worldwide volcanic activity that continued all over the earth for 150 days (Genesis 7:24; 8:2). Imagine the devastation!

Could there be any recovery after such wholesale destruction? Surtsey is a good example of a mature and varied landscape that developed in just a few months following the island’s volcanic formation in the Atlantic Ocean in 1963.10 A life scientist who studied it stated in 2008, “Surtsey always provides surprises….We discover about 20 new species [of life forms] each year.”11 Together, about 60 plant species including mosses, lichens, and an evergreen shrub have been established since Surtsey formed. Its rapidly growing ecosystem is powerful evidence against critics who claim that Earth could not possibly have recovered yet from a worldwide flood that happened only thousands of years ago.

In 2015, research was published12 regarding “river ecosystems [that] show ‘incredible’ initial recovery after dam removal” in the western United States.13 A related article stated:

During his time conducting the studies in Washington, [ecologist Christopher] Tonra watched reservoir beds that looked like moonscapes return to vibrant, rich habitat and cascades emerge where none had been, at least for the last century. “Watching that happen was just incredible,” he said.13

The most significant volcanic upheaval in 20th-century America witnessed a similar remarkable renewal of a devastated environment.

When Mount St. Helens erupted in 1980, it destroyed every living thing around it. Gas, ash and rock, heated to over 1000 degrees Fahrenheit, sterilized a 60-kilometer square area, leaving a gray lunar-looking landscape devoid of plants and animals. Within a year, the first plant life had started to return, just as ecologists predicted it would.14

In fact, “the recovery of the Mount St. Helens area was ‘a wonderful living laboratory’ to investigate how ecosystems and species respond to and recover from major disturbances, said Charlie Crisafulli, a research ecologist.”15 Biologists at the University of Washington observed the recovery of two areas covered by violent types of debris flows or mudflows called lahars. They found “there are striking differences—the forest-surrounded lahar has recovered much faster and has pines and firs atop it, while the more isolated lahar is still mostly covered by grasses, early-stage colonizers.”15

The Mount St. Helens area has quickly recovered from intense devastation. After only 20 years, biologists noted a rapid recovery of animals and plants on what had been something close to a thermonuclear blast zone. Today, the 40-year-old zone is a lushly treed forest. Noah and his family no doubt witnessed the same kind of rapid recovery in the decades following the global Flood.

Mount St. Helens has provided 40 years of empirical data that support catastrophism and refute strict uniformitarianism. The eruptions have even changed the way secular scientists view Earth’s processes, shifting them to be more accepting of catastrophism. Creation scientists will continue to use Mount St. Helens as a living laboratory to study the devastating effects of events like the global Flood and Earth’s rapid recovery in miniature. It is truly a lasting monument to catastrophe.