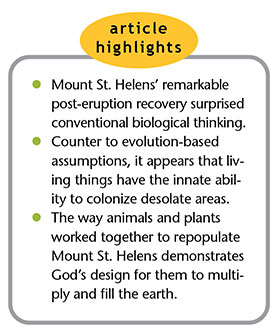 Early one bright Sunday morning, Mount St. Helens looked as picturesque as it had for hundreds of years. Suddenly, an earthquake shook loose the north side of the mountain. This uncorked a torrent of heat, ash, and steam that torched trees, pulverized rock, emptied and elevated Spirit Lake, and blasted debris across the nearby landscape. New land formed, mudflows wrecked bridges, and sediment clogged waterways far downstream. That was 40 years ago, but the eruption still brings valuable lessons today.1

The vicious May 18, 1980, eruption was supposed to have wiped all life from the north slope, but some survived the blast. Major wrote in a review for the American Geophysical Union publication Eos, “Even some of the most heavily affected landscapes were not as sterile as initially assumed.”2 He wrote in Science, “Notably, remnants of the pre-eruption biota—biological legacies—that persisted even in what appeared to be a lifeless landscape critically affected ecological recovery.”3 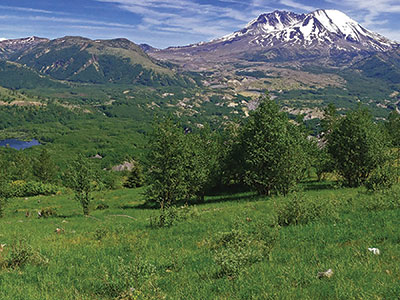 Before the eruption, conventional ecologists thought that living things would slowly creep back into the ash and mud from surrounding areas. They thought it could take a century or more for biology to brave the barren blast zone. Evolutionary thinking influenced those preconceived ideas. Nowadays, ecologists see the rapid recolonization at Mount St. Helens as a good reason to recalibrate their old ways of thinking. And these updated expectations for how fast life can colonize mesh well with creation thinking.

Genesis says that God created creatures to multiply and fill the earth. If true, then He would have equipped them with the proper tools to do just that. No wonder keystone species, which support other species in the ecosystem, soon took root, even in nutrient-poor soil.

Major cited research showing that alder trees and lupines began to grow in the mud first. These pioneering plants form symbiotic relationships with microbes that partner with their root tissues, pulling vital nitrogen from the air and plugging it into the soil. 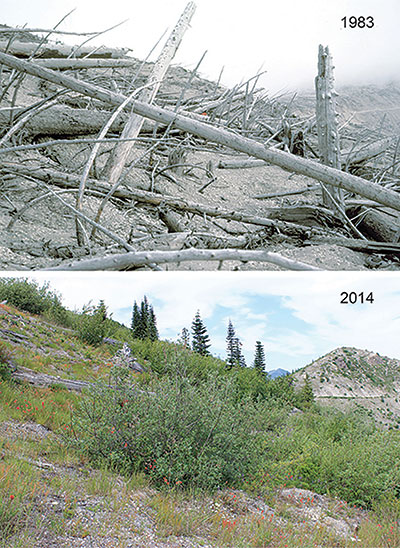 Unexpectedly, pocket gophers’ burrowing brought that newly nutritive soil to the surface. In far less time than expected, ground that was near keystone species had enough nutrition to support other plants. Today, tall alder and other trees sprinkle the grassy landscape that not too long ago looked quite like the moon’s surface.

Major wrote in Eos, “The importance of biological legacies in promoting recovery emerged as an epiphany.”2 This biological recovery research has influenced land management philosophy. Major wrote of “using variable-retention harvesting, rather than clear-cutting.”2 Creation thinking fits this idea, too. Instead of wiping out every single tree when harvesting wood, we should wisely leave keystone species behind. God equipped them with the tools to quickly re-establish a new forest that harbors habitats, builds biodiversity, and makes more wood that much faster.

In contrast to the pre-1980s evolution-inspired thinking that each organism struggles for its own survival, the big ecological lesson from Mount St. Helens is that plants and animals often work together. Creatures partner to pioneer new lands just like Genesis says they were made to do.