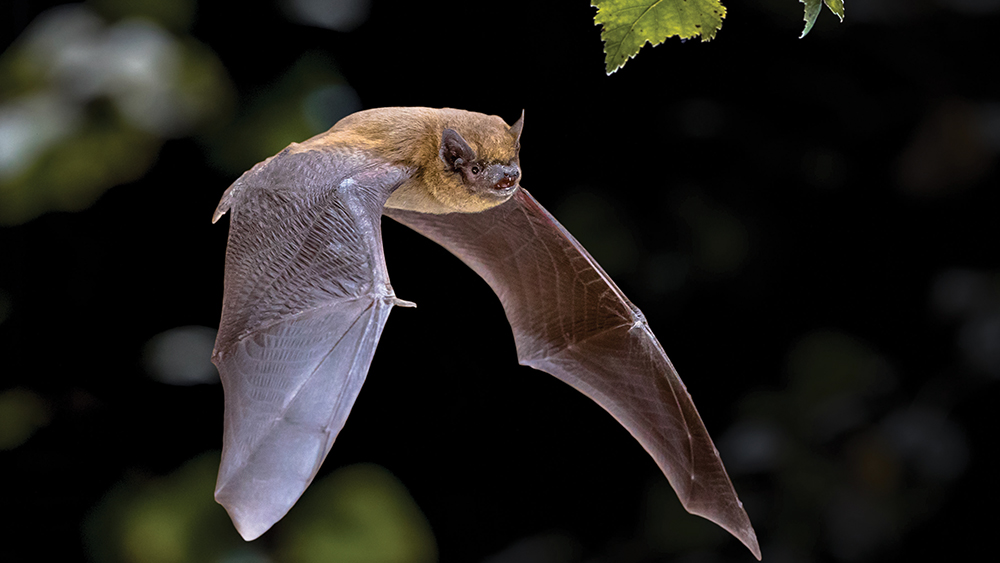 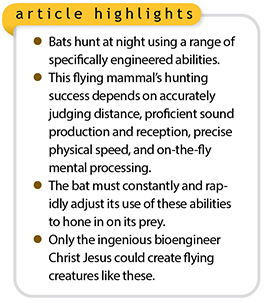 Bats are mysterious, marvelous mammals of prey, even in a fallen world where omnivorous predation is common.1 Because bats are mostly nocturnal, only beginning their aerial hunting at sunset, their nighttime foraging habits often go unseen by human observers.1,2

Scientists can discern certain aspects of bats’ gustatory preferences by their digestive byproducts.2 But even apart from reviewing the menus of bat diets, consider how prey-chasing bats hunt for “fast food” using echolocation, a perfect illustration of continuous environmental tracking.3 Let’s look at seven critical factors and real-time challenges of a bat employing sound to locate and capture its food.

First, the bat must factor distance.

A bat’s call must be strong enough to make the outward journey to a target and the return journey back to its ears. But sounds quickly lose energy as they travel through air, especially when they’re high in frequency, so echolocation only works over short ranges.4

Fifth, as the bat flies—one active example of complicated motion—the repeated sonar emissions must unerringly track the targeted-yet-dodging prey, which is another active example of complicated motion.6 As the capture distance shortens, the prey’s ever-changing location must be precisely adjusted for, with brief-yet-close-together pulses of sound that are separated enough to avoid garbled “blurring” of overlapping calls and echoes.

The bat must compute space from the timing of its echoes, and since echoes returning from the two equidistant [objects] would arrive after the same delay, they might sound like the same object.4

Sixth, there’s a sonar version of camouflage. Tiny prey, like mosquitoes or flies, can get “lost” against a larger background (like radar chaff) such as leaves or tree bark.4 Seventh, bats live in colonies; they often hunt in packs. Thus, bats must informationally distinguish their own call-echo sound data from that of other bats in order to focus on their own prey pursuits. Yet, sonar data from other bats can’t be ignored. Otherwise, bats would collide into each other as they hunt.1,4

There’s more, of course, but this sufficiently shows how the supposedly “simple” habit of bats going out to eat—while actively acquiring external information (continuous environmental tracking)—demands that bats be bioengineered by someone who is a whole lot smarter than the smartest of humans.

That super-ingenious someone is the Lord Jesus Christ (John 1:1-3).