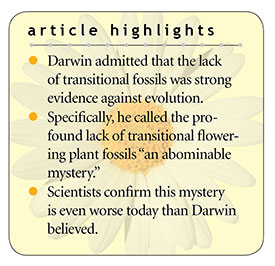 Charles Darwin frankly acknowledged that the profound lack of transitional forms in the fossil record for one fundamental type of creature evolving into another was “a valid argument” against his idea of progressive gradualistic evolution over deep time.1 Not only were undisputed transitional forms missing for the animal kingdom, the plant kingdom’s lack of such fossils was even more problematic.

About 20 years after Darwin published his famous treatise on evolution, he penned a letter to his close friend the famous botanist Joseph Hooker, complaining, “The rapid development as far as we can judge of all the higher plants within recent geological times is an abominable mystery.”2

The chief evolutionary problem with the fossil record is the repeating theme of sudden appearance and stasis (lack of change).

Now a leading authority in plant evolution at the Royal Botanic Gardens, Kew in London has stated in an editorial in the prestigious journal Nature Ecology & Evolution, “Although this abominable mystery is often cited today, and sometimes declared solved, few realize that the mystery is deeper today than it was for Darwin.”3

The chief evolutionary problem with the fossil record is the repeating theme of sudden appearance and stasis (lack of change). Organisms appear fully formed with no previous evolutionary precursors or ancestors, and then they stay the same for millions of years, according to evolutionary dating.4 In fact, many modern living creatures appear nearly identical to their fossilized counterparts. Nowhere in the fossil record is this more dramatic than with the appearance and timing of the diverse, large group of flowering plants known as angiosperms, which produce seeds within an enclosure (i.e., a fruiting plant).

Plants are the foundation of the global ecosystem, a key factor in the carbon/oxygen cycle for life and the food chain in general. A majority of today’s plants are angiosperms. The key question for evolution is why these angiosperms appeared so suddenly and so widely diversified so late in the fossil record. In other words, why have evolution’s predictions failed so spectacularly?

The solution to this quandary is readily available in the Bible, which states that plants were created along with the rest of the earth and its inhabitants during an initial creation week. Complex systems must be assembled all at once for them to function, not bit by bit over slow eons of time. Thus, the creation of the earth and its unimaginably complex life cycle in a single six-day period not only makes good engineering sense but also solves the problem of the sudden appearance of the angiosperms, along with their stasis. The fact that such delicate tissues as plant leaves, flowers, and soft stems could be perfectly preserved en masse in sedimentary rocks the world over is only explained by a rapid catastrophic burial in a global flood—also exactly as described in the book of Genesis.

From a creationist perspective, the angiosperm record also helps us determine the extent of the global Flood in the geological record, where the layers generally correspond to the floodwater levels and their violent ebb-and-flow depositional patterns. Since the appearance of angiosperms is found throughout the rock layers from the Cretaceous through the Neogene, with many entirely new groups of angiosperms found in both the Paleogene and Neogene,5 the Flood record clearly extends throughout most of the Cenozoic.6 God’s book, not Darwin’s, answers the abominable mystery.