The accuracy and authority of God’s Word are often attacked by those who claim that science shows biblical claims to be erroneous if not impossible. 1 Peter 3:15 calls on believers to be always “ready to give a defense [apologian] to everyone who asks you a reason for the hope that is in you.” A good place to start is to 1) examine the assumptions of the questioner, and 2) examine closely what the Bible actually says.

For instance, one common stumbling block uniformitarians introduce is the question of how long it took starlight to reach Earth, saying it couldn’t possibly have both started and arrived on Day 4 of the creation week as recorded in Genesis. No human observed or measured the travel time for its original delivery. However, as Dr. Henry Morris observed, we know starlight accomplished God’s declared purposes listed in Genesis 1:14-18, which included starlight being promptly visible to mankind on Earth.

In order to serve these purposes [for the sun, moon, and stars], however, light energy trails would need to be established already in place in space [raqia‘ ] between each star and earth. Thus, men would have been able to see stars billions of light-years away at the very moment of their formation, in accordance with the principle of mature creation, or creation of apparent age.1 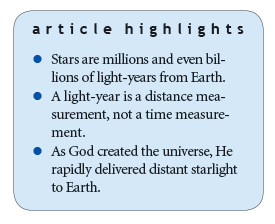 Most creationists no longer believe God created starlight “in transit,” but they all agree distant starlight reached Earth quickly. The Hebrew text demands that starlight’s complete transmission first occurred within the timeframe of Day 4. The main action verb in Genesis 1:17—a form of nathan usually translated “give,” more literally “transfer” or “deliver”—emphasizes the original transmission of starlight, not God’s positioning of the stars.2 This means that during Day 4, distant starlight logistically began and completely arrived at (i.e., was “delivered” to) Earth.

As Peter predicted, scoffers say “all things,” including distant starlight, “continue as they were from the beginning of the creation” (2 Peter 3:4), so how could starlight travel countless light-year distances so speedily? Uniformitarians assume that starlight began its intergalactic journey eons ago because they assume distant starlight—even “from the beginning”—has always required billions of years to reach Earth.

God-designed beginnings are not always representative of later continuation norms.

But God-designed beginnings are not always representative of later continuation norms. Consider a human baby’s embryology; it is not representative of how newborn humans grow and develop. Consider the form and behavior of an adult Monarch butterfly; it is not a good “key” for guessing what its earlier caterpillar phase was like.3 Likewise, during the creation week, creation’s processes included many mighty miracles that are not normal today.3,4 Therefore, assuming that evolutionary eons of billions of years of “deep time” are needed for Earth to originally receive starlight is simply wrong—because God transmitted the original starlight by special delivery!

Deists pegged Earth’s years in the millions.
Many stretch that, today, to the billions.
Dismissing Day 4,
God’s Word they ignore,
Thus erring by margins of billions.5