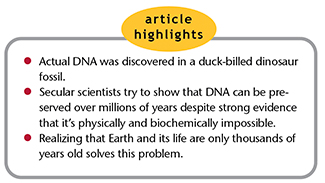 Observable facts have a way of embarrassing erroneous theories. Consider how awkward it is that dinosaur bones or cartilage repeatedly show not only soft tissues, like stretchable collagen and recognizable erythrocytes and osteocytes, but also biomolecules that can’t be adequately explained as anything except actual dinosaur DNA.

This disconcerting development is especially humiliating for evolutionists who previously denied the modern existence of dinosaur DNA, because 1) DNA molecules must biochemically degrade into unrecognizability in less than a million years, and yet 2) evolutionists insist all dinosaurs died tens of millions of years ago.1 To them, the very idea of recognizable dinosaur DNA is an impossibility.

This [duck-billed dinosaur cartilage] study provides the first clear chemical and molecular demonstration of calcified cartilage preservation in Mesozoic skeletal material, and suggests that in addition to cartilage-specific collagen II, DNA, or at least the chemical markers of DNA,…may preserve for millions of years.2 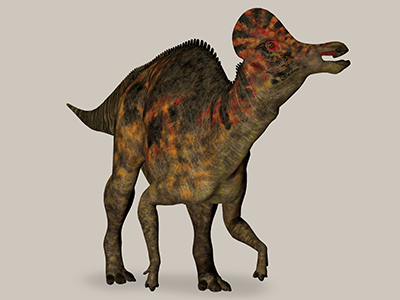 Dr. Schweitzer and her colleagues cautiously suggest there must be an explanation for “deep time”-surviving dinosaur DNA via some as-yet-undiscovered process that somehow stabilizes fragile DNA. Notice how the deep time assumption itself isn’t questioned by Schweitzer and her team. Rather, they assume DNA’s inherent instability is somehow rescued by yet-unknown mechanisms that inexplicably preserve it for millions of years. Further, they note that popular reluctance to admit dinosaur DNA can exist today has delayed scientific progress.

The assumption of a temporal limit on molecular longevity has hindered the pursuit of molecular data from fossils older than ~1 million years (MA). A short temporal range is predicted for informative biomolecules (~1 MA for proteins, and ~100,000 years of DNA; with 700,000 years as the oldest genome report)….However, these assumptions have been challenged by multiple studies on Mesozoic fossil remains reporting evidence of chemical and organic remnants, including extracellular proteins and pigments,…cytoskeletal proteins, compounds that localize to cell interiors that are chemically consistent with DNA…and peptide sequence data including histone proteins, a protein not found in bacteria.2

In other words, evolutionist assumptions have delayed scientific progress. Meanwhile, what hope does Schweitzer give to her evolutionary comrades to explain the awkwardness of dinosaur DNA remnants surviving into modern times?

Although extensive research and sequencing is required to further understand DNA preservation in Mesozoic material,…our data suggest the preserved nuclear material in Hypacrosaurus [duck-billed dinosaur] was in a condensed state at the time of the death of the organism, which may have contributed to its stability.2

So, some dinosaur DNA chromosomes were in “condensing” mode when the creatures died? DNA-containing chromosomes are constantly undergoing mitotic cell divisions—including condensing stages—in animals of all kinds, but why or how should that detail become a “magic bullet” that miraculously preserves unstable DNA over deep-time eons? The fact is biochemical entropy is universal and DNA is inherently unstable, so DNA wouldn’t survive intact over millions of years.

However, because Genesis is true, dinosaur DNA doesn’t need to survive in bones or cartilage for millions of years since the creatures the samples are drawn from were killed and buried by the global Flood about 4,500 years ago, along with many other forms of life.3 All of which leads to this conclusion: If it looks like a duck-billed dinosaur’s DNA, it probably is. The reason why it’s still recognizable as DNA is because duck-billed dinosaurs lived not that long ago.