ACTS & FACTS     BACK TO GENESIS
Understanding Evidence for the Biblical Timescale
THURSDAY, APRIL 01, 2010

Time and history clearly differentiate between the biblical and evolutionary worldviews. Vast time is required for broad-scale evolution, and this has been widely used as a filter to interpret data from all disciplines that have historical implications. Vast time is so fully branded into our thinking that it has gained an unquestioned status, even when solid evidence is presented to the contrary.

As a result, one who doubts deep time faces the tough challenge of remaining unaffected by its prevalence in our culture. Scientifically, this situation is odd, because there are so many natural processes that indicate a young world.1 Perhaps the most spectacular include soft tissues in fossils, such as the elastic blood vessels from an "80 million year old" hadrosaur described in Science in early 2009. The rate at which soft tissue decays would not allow a hundred thousand years, let alone eighty million years.2

The late Harvard paleontologist Stephen Gould was accurate when he said, "The stereotype of a fully rational and objective 'scientific method,' with individual scientists as logical (and interchangeable) robots, is self-serving mythology."3 Scientists, being human, are worldview-driven, and have various motivations that go beyond science. This helps explain how deeply held notions of deep time predominate despite contradictory evidence.

Further, many recognize that there not only exists no hint of deep time in Scripture, but that evolution's trinity of time, death, and chance undermine Scripture's straightforward young biblical history, as well as the Christianity which rests upon that history. Why would God have sanctioned "millions of years" of death as "very good" in Genesis 1:31? Why would the book of Romans confirm the Genesis history that death came as a result of Adam's sin if in fact there were vast ages of death prior to Adam? Also, why would the Lord Jesus Himself have verified the recent history of Adam in Mark 10:6? In the ongoing war of the worldviews, biblical history and evolution's history cannot both be true. 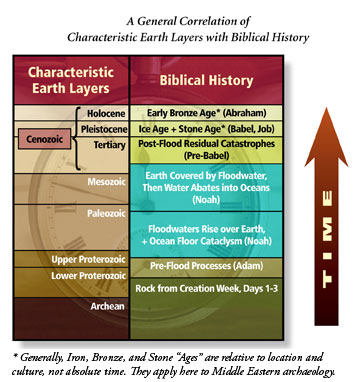 Clearly, there are solid scientific and theological reasons supporting a young age for our world. But maintaining confidence in a straightforward biblical history can still be difficult and unpopular, because scientific or historical discoveries are constantly blended with the leaven of deep time, and repetition can brainwash.

The chart at the right could therefore be used as a rough calibration to convert evolutionary teaching to real biblical history,4,5 if the reader can first associate evolutionary teaching with a characteristic earth layer. It is merely intended as a gross approximation, as exceptions will be found in many specific cases. Some argue that since there is no validity at all to evolutionary ages, their entire system ought to be thrown out. However, there are real rock layers to investigate.

It may seem straightforward to translate numbered evolutionary dates into numbered creation dates, but there are too many variables to be able to do this cursorily. Instead, a closer look at each case is required. Nevertheless, this chart may provide a beginning. Interpretations of strata are constantly changing, as well as numeric estimates for both evolutionary dates and biblical dates. The chart above correlates some of the main earth deposits with certain events recorded in the Bible.6

* Mr. Sherwin is Senior Science Lecturer and Mr. Thomas is Science Writer at the Institute for Creation Research.