The Rocket Bug: Lone Insect of the Open Ocean | The Institute for Creation Research
Skip to main content
NEWS     CREATION SCIENCE UPDATE     OCEANS     GOD'S DESIGN IS AN ENGINEERING WONDER     LIVING CREATURES WERE CLEARLY DESIGNED     LIVING CREATURES WERE EQUIPPED TO ADAPT     ZOOLOGY     SCIENCE     TECHNOLOGY
The Rocket Bug: Lone Insect of the Open Ocean
BY BRIAN THOMAS, PH.D. *  |
TUESDAY, JUNE 02, 2020
Various water-striding insects use small body sizes, long legs, and fine hairs on their feet to skate on the surfaces of ponds and streams. But life on the open ocean presents tougher challenges than landlocked waterways. Waves, fishes, salt, and birds should spell disaster for such small striders. Only one genus, Halobates, has cracked the ocean code, and new research names the necessary creature features.

In the journal Scientific Reports, they published that certain tiny leg and body hairs end in a mushroom shape instead of a peg shape as in stream-living water striders.1 The widened hair tips trap air near this insect’s body. This increases its buoyancy and offers three life-sustaining benefits. If violent waves submerge the insect, it more easily bobs to the surface. Even if it stays down, it can breathe that trapped air for a time. Plus, after the insect jumps high off the sea surface, it crash-lands. That extra air cushions its fall enough to keep it on top of the water even on impact.

Ocean-dwelling Halobates have more hairs packed into smaller areas than their cousins. It secretes a wax to coat the hairs, making its body and legs superhydrophobic. Even raindrops slide right off its slick surface. The insect needs at least six features to make itself superhydrophobic: uniquely shaped hairs, a high density of hairs, two separate lengths of hairs, a wax secretion gland positioned where its foot can reach it, what the study authors called a “grooming apparatus” on its legs that spreads the wax on its other legs and body, and the instinct to know exactly what to do with the wax. Which feature evolved first?

If all the features had evolved except the wax gland, the creature would lose its superhydrophobicity—ability to repel water from its body. If all the features including the wax gland had evolved, but the wax chemistry wasn’t yet quite right, it would again lose that ability. Instead of evolving each feature one at a time, this bug would never survive the open ocean without all these features in place at once.

And its list of essential features doesn’t stop there. The team measured the insects’ acceleration at 389 meters per second—much higher than freshwater-living water striders. How does it jump with such strength? It has longer legs than its body size when compared to freshwater species, and it has middle legs “much longer than the hind legs, allowing it to generate rapid movements.”1 It also has faster reaction time in response to threats. Fish from below can’t catch this nearly-instantaneous jumper. 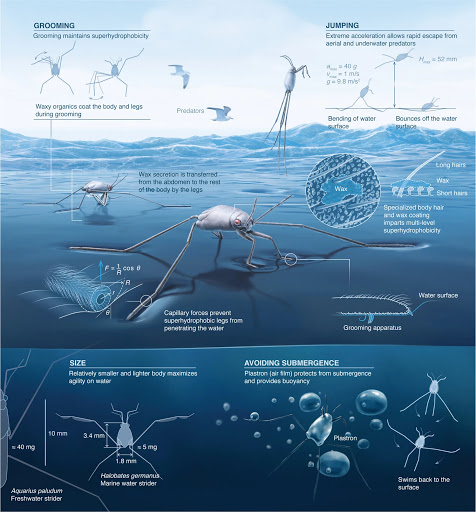 Summary of key adaptations of Halobates for oceanic life.
Image credit: Figure created by Xavier Pita, Senior Scientific Illustrator, KAUST. Adapted for use in accordance with federal copyright (fair use doctrine) law. Usage by ICR does not imply endorsement of copyright holders.
Other Halobates also have superhydrophobicity, grooming instinct, specialized hairs, and “reduction in body size and mass,” but they cannot colonize seas. The Scientific Reports study authors proposed that those traits aren’t enough for it to thrive on the open ocean. Additional traits include “winglessness, ability to lay eggs on floating substrates, longer oviposition periods, slower growth rates and longer life spans compared with coastal and related freshwater species.”1

All those features—all at once. Or it dies in the open ocean. What natural process could put all this in place?

The study authors attributed the origin of its “adaptations” (by which is meant “design features”) to “likely products of evolutionary selection of traits resulting in a fine-tuned ocean-worthy prototype.” That’s it. They offer an empty phrase in place of science.2

What supposed evolutionary selection steps would have happened in which order? What mechanism would spread those supposedly new traits from one evolving individual into a breeding population of bugs? What steps would have or could have held each new necessary trait in place while the population waited for untold generations for the required suite of ocean-specific traits to evolve?

The total absence of any scientific or even imaginary answers to these key questions showcases the abject emptiness of throw-away statements like “evolutionary selection” in cases like this. Fine-tuned features come from fine tuners. God, not nature, clearly crafted Halobates’ stunning array of fine-tuned features required to live in the seas that He also created in the beginning.

*Dr. Brian Thomas is Research Associate at the Institute for Creation Research and earned his Ph.D. in paleobiochemistry from the University of Liverpool.
More All People Descended Recently from a Single Family