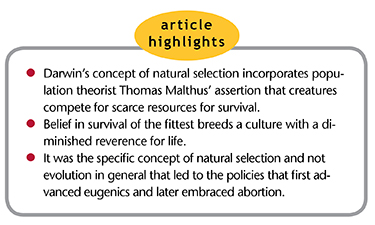 To effectively tackle a problem, one must know what caused it. A doctor must correctly diagnose a disease to help the sick person get better. If a building collapses, engineers will use “root cause analysis” to probe with ever-deepening questions what triggered the accident. Unless the true cause is identified, a professional problem solver is left either treating symptoms or wasting valuable time.

A similar approach could be taken with societal ills. What is the root cause of so many of the problems that plague us? 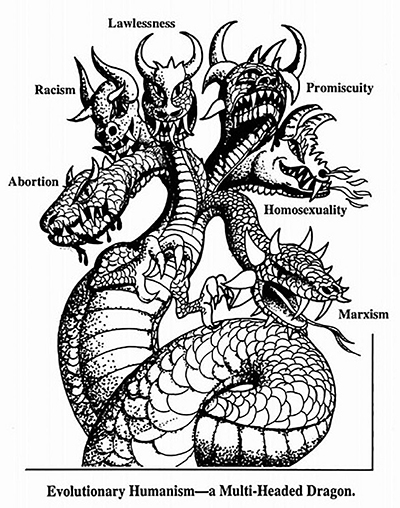 In 1994, Dr. John Morris’ book The Young Earth included a diagram depicting societal diseases, including abortion, as a multi-headed dragon sprouting from the body of evolutionary humanism.1 Abortion is the killing of unborn children, declared legal in the United States in 1973 in the Roe v. Wade Supreme Court decision. The other afflictions associated with each dragon head could easily be replaced with diseases of a more lethal nature: mass shootings, infanticide, euthanasia, genocide, and eugenics. Some of these behaviors leave us stunned. Others, however, are counted as a hallmark of liberation and the “right to choose.”

That they continue with such a high frequency reveals a society increasingly desensitized to death. How can whole cultures of Western civilization, which previously embraced Christian teachings, get to this point? Is evolutionary humanism the direct cause of the numbness in society toward death? Would probing deeper into Darwinian evolution reveal something about it that smooths the way for people to see death as accomplishing good things?

Evolutionary humanism seems oddly obsessed with the idea that death is ultimately a good thing. Possibly no one illuminated more clearly the heart of Darwinian thinking than Steve Jobs, the founder of Apple Computer. Having been diagnosed with a fatal case of pancreatic cancer, he adopted the Darwinian meaning of death and said in his 2005 commencement address at Stanford University, “Death is very likely the single best invention of Life. It is Life’s change agent. It clears out the old to make way for the new.”2

Our youth are bombarded with the idea that diversity is a result of survival of the fittest—which involves, as Steve Jobs said, death as “the single best invention of Life.” No wonder they develop a perverse easiness with death. They watch a cheetah chase down a gazelle and reflexively react with “Oh well, survival of the fittest.” What causes our culture—and even many Christians—to think death is good?

Romans 1 Identifies the Root Cause for a Culture of Death

Romans 1:18-25 describes a dichotomy in how people respond to the “clearly seen” revelation of God in nature.3 It contrasts how humans either give credit for nature’s origins to a Creator’s agency or credit nature itself. In short, either God creates nature or nature creates itself. For example, Edward O. Wilson of Harvard contends, “If humankind evolved by Darwinian natural selection, genetic chance and environmental necessity, not God, made the species.”4

That’s easy for Wilson to declare, but is nature a sufficient agent to bridge the gap between his imagined scenario for life’s origin and real human beings who look like the workmanship of a brilliant Engineer? Intelligent design advocate William Dembski explains how Darwin contrived a way to see nature as intelligent and able to exercise agency:

In short, evolutionary biology needs a designer substitute to coordinate the incidental changes that hereditary transmission passes from one generation to the next, and there’s only one naturalistic candidate on the table, to wit, natural selection. Indeed, it’s no accident that the word selection and the word intelligence are etymologically related….Before Darwin, the ability to choose was largely confined to designing intelligences, that is, to conscious agents that could reflect deliberatively on the possible consequences of their choices. Darwin’s claim to fame was to argue that natural forces, lacking any purposiveness or prevision of future possibilities, likewise have the power to choose via natural selection. In ascribing the power to choose to unintelligent natural forces, Darwin perpetuated the greatest intellectual swindle in the history of ideas. Nature has no power to choose.5

Darwin mentally projects volitional capacity onto environments by ascribing to them selective abilities. Thus, he personifies nature with the capability to exercise agency. His approach to making sense of the biological realm is called selectionism. This worldview underlying modern biological education is a powerfully seductive mental construct. One evolutionist summed up the situation: “The idea of a selecting power is deeply rooted and seemingly ineradicable from the modern biologist’s thinking about evolution.”6

Not only is this worldview pervasive, it’s misleading. Like Dembski, science historians note that prior to Darwin’s Origin of Species, scientists only assigned selective abilities to conscious agents and not to unconscious nature.7 Darwin’s imaginary projection of selective ability onto nature “appeared to reify [treat an abstract concept as a concrete reality], even to deify, natural selection as an agent.”8 But what links selectionism to a culture easy with death?

Selectionism Is a Death-Driven Worldview

“Walk it back” is an idiom people use to cast a situation or mistake in a different light in order to minimize its consequences. We can spot when natural selection is being walked back when it’s recast as, say, just a process or merely “differential reproduction.” But euphemisms like these seek to avoid the negative connotations surrounding the pivotal role death plays in the concept of selection. Listening to Darwin and other evolutionists in their own words will correctly characterize their thinking.

This is the doctrine of Malthus, applied to the whole animal and vegetable kingdoms. As many more individuals of each species are born than can possibly survive; and as, consequently, there is a frequently recurring struggle for existence…we shall then see how Natural Selection almost inevitably causes much Extinction of the less improved forms of life.9

I have called this principle, by which each slight variation, if useful, is preserved, by the term Natural Selection, in order to mark its relation to man’s power of selection. But the expression often used by Mr. Herbert Spencer of the Survival of the Fittest is more accurate, and is sometimes equally convenient.9

Moreover, natural selection, expressed in inappropriate human terms, is a remarkably inefficient, even cruel process. Selection carves adaptation by eliminating masses of the less fit—imposing hecatombs [slaughter of many individuals] of death as preconditions for limited increments of change. Natural selection is a theory of “trial and error” externalism—organisms propose via their storehouse of variation, and environments dispose of nearly all.10

A subsequent article finds Gould chiding the hypocrisy of those who believe they can embrace a benevolent view of God and pro-life positions while simultaneously commending the virtues of selection:

The radicalism of natural selection lies in its power to dethrone some of the deepest and most traditional comforts of Western thought, particularly the notion that nature’s benevolence, order, and good design, with humans at a sensible summit of power and excellence, prove the existence of an omnipotent and benevolent creator who loves us most of all….To these beliefs Darwinian natural selection presents the most contrary position imaginable. Only one causal force produces evolutionary change in Darwin’s world: the unconscious struggle among individual organisms to promote their own personal reproductive success—nothing else, and nothing higher (no force, for example, works explicitly for the good of species or the harmony of ecosystems).11

Paradoxically, selectionists believe that this chaotic deadly scenario they envision is true while also believing that thanks to natural selection we have the marvelous diversity of creatures observed in our world.

Survival-of-the-fittest thinking ranges from indifference to callousness toward the weak. That coldness for “unfit” humans took hold with the rise of eugenics, whose root cause is evident in explanations contemporaneous to its heyday. Renowned British biostatistician Karl Pearson persuasively used mathematics to promote eugenics on three continents from 1900 until his death in 1936, claiming:

That is, I think, the ever-present fear which the scientific mind recognises: civilised man has largely destroyed crude Natural Selection….In my own mind and in a growing number of other minds…[civilization will end] unless civilisation can find a method of doing for itself what Natural Selection did for man during his ascent—insuring that he shall breed only from his best. The study of how it is possible forms the subject matter of what we now term the Science of Eugenics. We have to replace the ruthless action of Natural Selection by reasoned conduct in civilised man.12

After the “reasoned conduct in civilised man” produced over 70,000 compulsorily sterilized people in the United States, the public found sterilization increasingly distasteful.13 But Roe v. Wade and other factors have made culture more accepting of abortion. Social scientists Deborah Barrett and Charles Kurzman describe how eugenicists channeled their ambitions into abortion rights activities:

In keeping with the subterranean strategy, some eugenicists continued their work under the cover of non-eugenic disciplines and organizations, such as the birth-control and population-control movements. For example, the first administrator of the Population Council, a former president of the American Eugenics Society, recalled in 1974 that the post-war birth-control and abortion-rights movements were great eugenic causes, but “[i]f they had been advanced for eugenic reasons it would have retarded or stopped their acceptance.” Eugenic ideals such as racism, paternalism, scientific authority, and genetic manipulation did not disappear from the world, and were arguably institutionalized in certain wings of the reproductive sciences.14 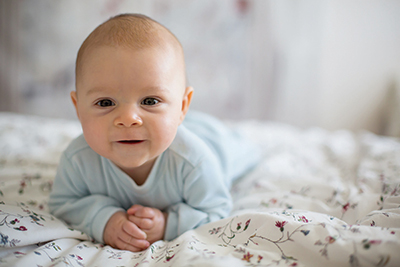 We live in a culture that’s easy with death because it’s permeated with Darwin’s survival-of-the-fittest thinking. Believing that death itself brings good things is the root cause. So, how do we navigate this culture while being pro-life and explain biology in a way that honors the Lord?

ICR affirms that death is an enemy and a curse due to Adam’s sin (1 Corinthians 15:26; Romans 5:12; Romans 8:18-23). Since the death of creatures with nephesh (soul-life) didn’t happen before the Fall,15 Darwin’s survival of the fittest could not have been God’s mechanism for adaptation, and other mechanisms not driven by death were—and principally still are—the means of adaptation.

Christ is not a eugenicist, so we should eschew believing that “selection” somehow shows His goodness after the Fall in providing a death-driven means to “weed out” unfit individuals from the population and thus preserve a purer gene pool.

When a person is sterilized, aborted, or dies before reproducing due to a genetic disease, it is not a gift to the rest of us—it is a tragedy.