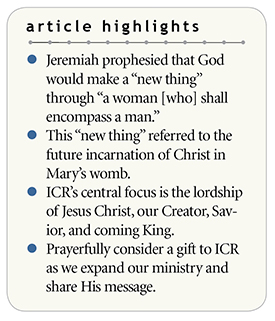 Many books of the Old Testament contain prophecies of Christ’s incarnation—even the heartbreaking account of the prophet Jeremiah.

Jeremiah, the last of the pre-exile prophets, saw Babylon carry Judah away into captivity. He is often referred to as the “weeping prophet” for his impassioned pleas to his people to repent from flagrant apostasy and turn back to God. On the other hand, his book contains many marvelous Messianic prophecies promising deliverance and future restoration, most notably in Jeremiah 31. This chapter contains the first revelation of the coming “new covenant” (v. 31) that God would make with Israel and Judah and that, according to the author of Hebrews, would eventually incorporate all of God’s people in every age through Christ (Hebrews 8:6–10:10).1 But before this could happen, God would create “a new thing in the earth” via “a woman [who] shall encompass a man” (Jeremiah 31:22).

The creation of anything new seemingly conflicts with Solomon’s declaration years before that “there is nothing new under the sun” (Ecclesiastes 1:9). Even the scientific laws of conservation recognize that nothing (matter, energy, mass, etc.) is now being created or destroyed.2 As such, some see this woman as symbolic of the nation of Israel, the formerly chaste virgin now banished in disgrace who would one day embrace the Lord and be received back, fully forgiven.

But this view hinges on a rather poor interpretation of the word “encompass.” The Hebrew verb cabab, expressed here in the Poel imperfect tense, literally means “enclose” or “envelop,” and no other understanding of this promise would require a “new thing” to be accomplished. When considered in proper context—especially in view of the following verses that lead to the great new covenant promise—this “new thing” can be nothing less than the miraculous conception and virgin birth of the promised Savior.3

Only God can create, so a truly “new thing” must be fashioned by the Creator Himself. While God had long ago finished His original creative work (Genesis 2:1-3), He soon had to begin a new work of reconciliation due to mankind’s rebellion in the Garden of Eden. This would culminate with the promised “Seed” of the woman, who would come and finish this great work (Genesis 3:15).2

To accomplish this, God would miraculously create a completely “new thing” by His mighty power—one without inherited sin in the womb of a specially called virgin. She encompassed “that Holy One” (Luke 1:35) while He developed and grew, and “when the fullness of the time had come, God sent forth His Son, born of a woman…to redeem those who were under the law” (Galatians 4:4-5).2

It is this  “new thing” that we honor and worship at Christmas. He is so much more than a babe in a manger! He is the promised “‘Immanuel,’ which is translated, ‘God with us,’” who “became flesh and dwelt among us” (Matthew 1:23; John 1:14). We can rejoice that “God so loved the world that He gave His only begotten Son” and “according to the promise, [He] raised up for Israel a Savior—Jesus” (John 3:16; Acts 13:23).

The Lord Jesus Christ—revealed in God’s Word as our Creator, Savior, and coming King—is the primary focus of ICR’s ministry. We’re grateful for those who support our work, and your gifts this Christmas will be a sweet blessing as we make plans for the coming year. If you are able, please prayerfully consider how you can help. May God bless you richly as we celebrate God’s “new thing” of promise to us. Merry Christmas!