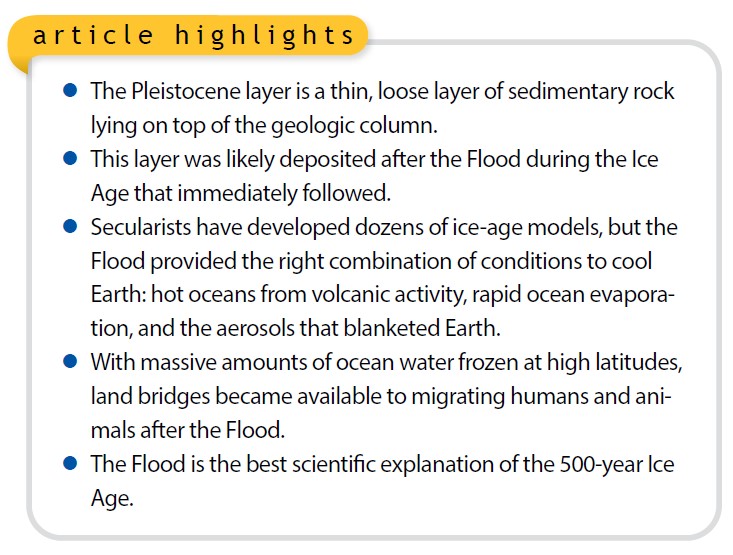 In the previous article in this series, I explained how the final rock layers were laid down in the global Flood as the newly separated continents and their mountain ranges were being uplifted and the sediment-laden waters poured off the continents.1 These last Flood layers formed what is known in the geologic column as the Cenozoic era, and the fossils it contains are full of creatures that were living at higher elevations in the pre-Flood world. In the system of geological sequence stratigraphy, the Cenozoic is mostly comprised of what is termed the Tejas Megasequence.

At the top of the Cenozoic are thin rock strata in various locations around the world that are called Pleistocene. While some of these deposits may actually be late-Flood rocks, the majority were likely formed after the Flood from the unique climactic conditions that occurred. In general, Pleistocene strata are typically composed of unsorted (random-size fragments) and unstratified (loose and not solidified) rocks and sediment as compared to the lower Flood layers of the geologic column that form distinct solid (lithified) strata.

One of the defining features of the Pleistocene is the global evidence of a post-Flood Ice Age. Much of this geological data can still be observed in receding glaciers that are active around the world today. These glaciers produce several distinctive geological features that we also see in Pleistocene strata.

One of these features is known as drumlins, which are low elongated hills containing the rock debris left behind by the glacier at its base. They are typically aligned with the direction of the flow of the ice. Another feature is known as moraines, which contain what is called glacial till (loose rock) that forms at the end of the glacier and is often perpendicular to the glacial flow and extends to the sides of the glacial valley. These features from the Ice Age are found in lower latitudes than today’s ice sheets and glaciers. These provide evidence that ice sheets in both the northern and southern hemispheres extended to lower latitudes than exist today and have since melted.

While secular scientists have great difficulty explaining evidence of an Ice Age and have literally put forth dozens of speculative theories, a biblical solution based on the global Flood fits the data closely. In this model, it is proposed that an Ice Age began shortly after the Flood about 4,300 years ago and likely only lasted for several hundred years.2

The mechanism for its action has been aptly applied as a four-point model using the acronym HEAT. 1) Hot oceans during the Genesis Flood were produced by hot, molten material from the earth’s interior, along with hot waters from “the fountains of the great deep” (Genesis 7:11), ongoing underwater volcanic activity, and heat generated from the friction of plate tectonics. 2) Evaporation into the atmosphere from the warm oceans would have increased levels of atmospheric moisture, allowing for high levels of snowfall over the cooler mid-to-high-latitude regions. 3) Aerosols (airborne particulates) would have resulted from the enormous amounts of volcanic activity occurring at the end of the Flood and afterward, filling the atmosphere and blocking the sun—creating a cool climate for snow and ice to accumulate. 4) Time (several hundred years) would have been involved in this overall process of extended post-Flood volcanic activity that continued as the earth was equilibrating from the massive amount of plate tectonics that had occurred during the Flood.

In previous articles, I described how the pre-Flood earth had been composed of one large mega-continent called Pangaea thatsplit apart into the global continental configuration of seven continents we see today.3-5 Not only is this massive level of tectonic activity important in explaining the HEAT model of the Ice Age, but it also directly relates to the ability of humans and animals to repopulate the earth after the Flood.

When the present separation of continents by oceans is observed, it is difficult to explain how the various kinds of animals on the Ark could have dispersed around the earth. However, when we take into account the post-Flood Ice Age, the problem readily disappears. The Ice Age would have created land bridges all around the world by exposing dry land as large proportions of the oceans would have been frozen. In fact, the massive amount of water stored in ice sheets would have fortuitously lowered sea levels by 200 to 280 feet below today’s level.6 The resulting land bridges would have made excellent pathways and migration routes for animals and humans to simply walk to the major continents.

One such interesting trail of evidence that serves as a good example has to do with the presence of kangaroos in Australia. How is it that kangaroos only live in Australia, and how did they get there? In a recent discovery, kangaroo cave paintings have been discovered in India, yet no kangaroos are known to currently live in India.7 However, India lies in the middle of the path across lower Asia leading from the landing site of Noah’s Ark to Australia. Furthermore, there exists a submerged former land bridge that came close to connecting Asia to Australia that would have allowed the kangaroos to migrate. The reason that we typically only find certain types of animals on the various continents is because of this selective migration that occurred post-Flood for several hundred years and was then brought to an end as the land bridges got covered with water as the vast amounts of frozen water bound up in the Ice Age melted.

Another defining feature of the Pleistocene seems to be the evidence of large body size (to conserve heat) and more hair as insulation, especially in creatures with the innate programming to live in the cold climates at higher latitudes. An excellent example of this is the mysterious wooly mammoth. The mammoths were essentially a type of elephant that expressed the traits needed to live in cold climates, having a very large body size compared to other types of elephants and a thick coat of hair. There is evidence that large herds of mammoths roamed the northern plains of Siberia and North America and that they were hunted by post-Flood humans for their meat and valuable hides.

Even today, we see large mammals living in the extreme cold of the north, such as walruses and polar bears. Like the mammoth among the elephant kind, polar bears are the largest of the bear kind. This evidence of scaling is an innate adaptive mechanism built into creatures by their Creator, the Lord Jesus. It is common to see larger variants of a created kind in cold climates while smaller variants of the same kind inhabit warmer environments at lower latitudes. And of course, one trait of creatures that have self-adjusted to warm environments is that they usually have less hair.

God’s Providence in the Ice Age

The majority of the Pleistocene rock layers are from post-Flood glacial and associated climactic activity during the roughly 500-year period of the Ice Age and are directly connected to the mechanisms surrounding the Flood. In fact, the Ice Age brought about by the tectonic activity of the Flood providentially lowered global sea levels and provided the phenomena of intercontinental land bridges so that the earth could be repopulated by animals and humans after the Flood. Only the activity and conditions generated by the global Flood can explain the Ice Age, which was a key part of God’s plan in the judgment and subsequent restoration associated with the global Flood.