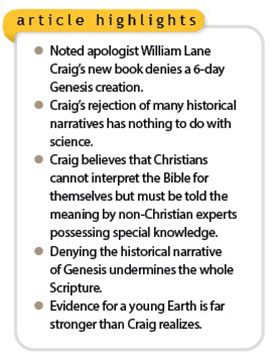 In a recent interview discussing his new book In Quest of the Historical Adam, philosopher and Christian apologist William Lane Craig acknowledged his biased assumptions when interpreting how the words of the Bible should be understood. What prejudices his interpretation of words contrary to their plain and normal meaning is his longstanding “great fear” that young-earth creationists are correct that the book of Genesis should be understood as real history.1 Dr. Craig is concerned that this would require a wholesale challenge to all of modern science. However, during the interview Dr. Craig made numerous revealing claims that show that science has nothing to do with why he rejects a historical Genesis.

He ridiculed clear biblical narratives that Eve was beguiled by a real “talking snake” and the “anthropomorphic” idea that God walked and talked with Adam and Eve as stories akin to ancient mythology. It is important to realize that these objections have nothing to do with modern science—science cannot inform us whether God would, or wouldn’t, walk with Adam and Eve. Nor can we scientifically test the ability of Satan to possess an animal and speak through it.

These are philosophical objections to a literal Genesis, not scientific ones. So, it cannot be the science per se that has Craig worried. However, affirming a literal Genesis does offend modern sensibilities that consider biblical truths to be foolish (1 Corinthians 2:14). Like the Corinthian Christians, we all need to guard against the fear of appearing foolish in the eyes of the world.

It’s Craig’s biases that he brings to the Bible—not anything in the Bible itself—that underlie his attack on biblical clarity, which undermines not just the first 11 chapters of Genesis but the entire Bible. If Craig rejects the normal meaning of Genesis 3 as real history because God walked and talked with Adam and Eve, then what does he do with Genesis 18, where God and two angelic visitors talk—and even eat—with Abraham? And what of Numbers 22:28-30 and 2 Peter 2:16, both of which affirm that the prophet Balaam was rebuked by his donkey? And what about 2 Corinthians 11:3, where the apostle Paul also affirms that Eve was deceived by a serpent?

Biblical creation has always seemed foolish in the world’s eyes, but this is not because evidence for creation is lacking. The ranks of biblical creationists include researchers recognized as world-class scientists.2 Scientific and historical evidence for even the earliest chapters of Genesis are abundant, and the creation-Flood model of the Ice Age is vastly superior to anything proposed by the Creator-denying scientists to which Craig eagerly conforms his understanding of Genesis 1–11. Moreover, creation researchers have published scientific evidence refuting iconic arguments for evolution and an old earth, and, like evolutionists, Craig fails to engage this primary literature. Evidence for biblical creation is not getting weaker over time, it is getting stronger.3

Is it really science that is keeping so many Christians from embracing a straightforward understanding of Genesis, or is it something else? Every Christian needs to guard against the sin of intellectual pride. Obedience to Christ does seem foolish in the world’s eyes. We all would do well to remember the admonition of the apostle Paul: “If anyone among you seems to be wise in this age, let him become a fool that he may become wise.”4