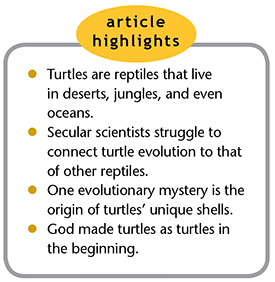 Turtles (Chelonia) are found in oceans, freshwater ponds, and on land. The Galapagos tortoise is the largest living species of tortoise and, like the sea turtle, is able to live well over a century. A 100% turtle fossil (Stupendemys geographicus) recently discovered in South America is the shape and size of a small car.1 Turtles are a truly unique kind of reptile designed with over 50 bones.

Like all other animal kinds, turtles have always been turtles, and “the relationship of turtles to other reptiles is controversial.”2 Clack reports that “which group forms [the turtles’] closest relatives is controversial,” and “some molecular studies have suggested that they could be highly modified diapsids [term given to a type of skull with two openings on each side], although a study based on embryology placed them as basal to diapsids [e.g., lizards, snakes, crocodiles].”3 Hickman et al stated, “Most recent genetic evidence indicates a close relationship with archosaurs [a crocodilian-like dinosaur].”4

Evolutionist Ann Campbell Burke spoke of turtle evolution as an “evolutionary conundrum” and a “puzzle,” saying, “It is already clear, however, that a strong consensus of turtle roots will not ‘solve’ all the riddles of their morphological [form or appearance] evolution,”5 and a more recent study stated, “The early evolution of turtles continues to be a contentious issue in vertebrate palaeontology.”6

Just as there is quite an array of different dog breeds from the Chihuahua to the Great Dane, we’re not surprised to find a variety of turtles since they were and are designed to move in and fill diverse ecological niches.

A fossilized turtle discovered in southwestern China fills an evolutionary hole in how the reptiles developed features such as a beak and shell, researchers report on 22 August in Nature. Although the specimen can help scientists to pin down when modern turtles developed such characteristics, it’s also muddied the waters when it comes to illuminating the group’s origins.7

When it comes to the origin of the turtle’s unique shell, an evolutionist recently reported, “How the turtle shell evolved has puzzled scientists for years.”8 Some secular scientists suggest the turtle Hox genes [homeotic genes involved in the basic developmental body plan] may be the reason for the remarkable transformation of a tetrapod (amniote) into turtles, but there’s no compelling scientific evidence for this.

God created a large number of animal kinds with amazing designs, the turtles among them. They were, and are, small and large. They have various features (horned shells, different beaks, flippers, claws, etc.), but they’re all turtles. Always were, always will be.