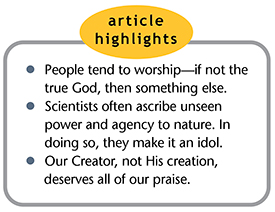 Engaging in worship seems unavoidable for humans—even the atheistic thinkers who dominate modern science. Reverence and adoration lie at the heart of worship. Scripture tells us the ancient Egyptians, Canaanites, Israelites, and other cultures worshiped idols. They imagined their idols held power and could sway personal, political, or physical events.

Ironically, some of the scientists who scoff at the way our ancestors gave god-like attributes to inanimate objects follow similar patterns today. Each person should examine their heart to root out subtle idolatry.

Romans explains idolatry and its effects:

Therefore God also gave them up to uncleanness, in the lusts of their hearts, to dishonor their bodies among themselves, who exchanged the truth of God for the lie, and worshiped and served the creature rather than the Creator, who is blessed forever. Amen. (Romans 1:24-25)

I’ve photographed ancient hand-size Canaanite idols on display at the University of Chicago, as well as a modern multistory Buddhist idol in China. Though millennia, measurements, and miles separate them, they share the same purpose: They give people something to worship instead of God. 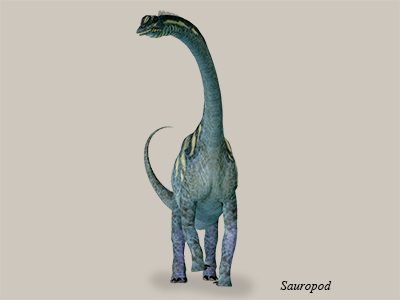 Even the areligious can fall prey to idolatry without knowing it. Idolatry is so damaging and pervasive that God listed it first in His Ten Commandments.1 Modern scientific minds commit idolatry when they revere and adore natural forces for crafting creatures instead of the God of all creation who actually made them.

Scientists Mark Hallett and Mathew Wedel authored the academic book The Sauropod Dinosaurs. In it, they wrote:

From osteoblasts that evolved millions of years earlier to originally give ancient fish protection from sea scorpions, natural selection evolved bioarchetectural marvels of strength and lightness to support vast weight and yet enable flexibility and movement [in sauropods].2

These authors replaced the Creator with evolution by natural selection. Does this differ so much from the ancients who revered their idols’ supposed power over physical events?

Make no mistake—sauropods show exactly the kind of exquisite design that only God could craft. Wedel and Hallett sprinkle design terms throughout their book. They describe “very lightly constructed short skulls,”3 but who is the constructor? In reference to sauropod vertebrae, they write, “Each elegant, sculpted-looking shape played a part in providing the giant animals with the most support needed with the least amount of bone.”4 Will the real sculptor please step forward? Terms like “constructed” and “sculpted” imply a purposeful, personal, powerful, and perceptive otherworldly architect. The God of the Bible meets all those criteria. Natural processes do not.

Has anyone seen or recorded natural processes such as climates and predators behaving like architects or engineers who design and build marvelous buildings or machines? As an actual Person, God qualifies. Nature qualifies as nothing. It has no mind, being, or agency, just like all those nothing idols. Thus, whoever ascribes architectural and engineering marvels to nature—whether called natural selection, evolution, or physical processes—robs God of the credit only He deserves.5

So, what steps can we take to root out naturalism’s idolatrous tendencies? When we see words that describe design, we need to keep the real Designer in mind. We need to recognize when scientists make unscientific statements and ask for evidence that shows natural processes can actually perform what naturalists say they can.

Finally, direct your expressions of reverence and admiration to the real Maker every chance you can!