In 1997, Dr. Mary Schweitzer published a series of articles detailing her observations of potential biomolecules within the trabecular (spongy) bone of a Tyrannosaurus rex femur found in strata conventionally dated at approximately 68 million years.1,2 Indeed, many observations of soft tissue in fossils dated at millions of years have occurred since 1977.3 The dilemma these observations present for deep-time advocates was immediately recognized, and controversy sprang up straightaway. How can soft tissue such as collagen survive intact for 68 million years when it has been experimentally established that at 10°C (around 50°F) only 1% of the original collagen in a bone sample can survive for longer than 700,000 years?4

In fact, Dr. Mike Buckley, a Royal Society University Research Fellow and Lecturer at the University of Manchester in the United Kingdom, stated, “Collagen decomposition would be much faster in the T. rex buried in the then-megathermal (>20°C) environment of the Hell Creek formation [collagen half-life ≈ 2,000 years]” in a Science journal technical comment.5 So, what we know experimentally raises serious questions about the age of the Schweitzer T. rex fossil. How should this conundrum be addressed? 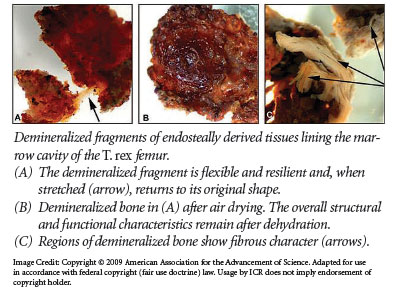 Dr. Schweitzer and her colleagues chose to assume that “deep time” is a scientific fact and therefore have made several attempts since 1997 to prove that soft tissue could remain intact for 68 million years. But further publications in 2005, 2007, and 2013 only served to deepen the mystery of cellular and protein preservation over millions of years.6-8

In the 2013 article, Dr. Schweitzer proposed a preservation process involving iron and hydroxyl radicals.8 To test this hypothesis, the team soaked ostrich blood vessels in a compound of concentrated hemoglobin called HB. As an experimental control, they soaked a separate sample of ostrich blood vessels in distilled water. Extensive degradation of the control sample of ostrich blood vessels in distilled water was observed after three days, while the samples with HB showed no discernable degradation after two years. They concluded that the presence of an iron compound such as HB would allow preservation of soft tissue over millions of years. Is this a scientifically valid deduction?

Two chemists, John DeMassa and Edward Boudreaux, documented the many problems with this particular experiment and refuted its conclusion.9 But the overriding fact is Dr. Schweitzer and her colleagues did not establish their hypothesis; 68 million years is vastly different from two years—their inference is absurd.

With the iron preservation hypothesis refuted, the mystery of proteins in fossils continues to deepen. Are the dinosaur bones millions of years old as secular dogma demands, or are they thousands of years old as clearly indicated by the biblical account of creation? A recent creation solves the dilemma.