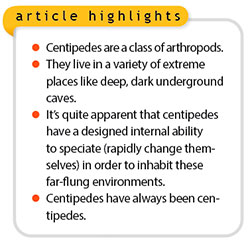 Crawly centipedes usually elicit shock and revulsion when they appear in one’s home, the woods, or some other place. They are found from deserts and Amazon forests to surge zones of seashores. Centipedes are not insects but belong to a large group of arthropods called the Myriapoda (having multiple segments and many paired legs) that also includes the millipedes. There are four classes within the Myriapoda, and their evolutionary relationships are only “hypothetical.”1 Meanwhile, the fossil record shows centipedes have always been centipedes.

The Lord Jesus has designed centipedes with multiple mechanisms that enable them to move in and fill unique—some would say extreme—environments. They are normally found under stones, bark, and logs and other dark, moist areas. But some are found in more challenging places. For example, centipedes commonly inhabit caves, although a few species are what zoologists call true troglobites—those who live their entire life in a cave.

In 2015, it was reported that the world’s deepest cave-dwelling centipede was found in Velebit Mountain of central Croatia. The remarkable arthropod was “well adapted to an underground mode of life.”2

This new species of centipede was named Geophilus hadesi after Hades, the mythical god of the underworld. It was found in deep vertical caves in central Croatia and is “characterized by relatively elongated trunk segments and appendages, including unusually long claws of the legs.” In fact, “another [centipede] has been observed at an unreachable spot at -1100 m...representing the world’s deepest record of a centipede known to date.”2

Although centipedes are occasionally found in caves, “very few of them seem to be highly adapted to this environment.” Whether they are highly adapted or not, the fact remains that some are found in this extreme deep-cave environment and evidently doing quite well. Stoev et al. state the characteristics of these cave-dwelling centipedes “evolved in relation to the underground lifestyle.”2 But creation scientists see the ability of centipedes (as well as other animals, plants, and microbes) to move in and fill various and unique habitats as being due to their engineered systems. They have an internal ability known as continuous environmental tracking (CET).3 This amazing engineered capability did not evolve through chance and time but was part of their genome (total genetic information) at the creation thousands of years ago. CET explains how organisms purposefully self-adjust to changes in environmental conditions—whether it’s the wind-swept Arctic, thermal pools, or deep caves—rather than adapting by evolutionary chance.

Centipedes are able to self-adjust in a manner that is highly rapid, regulated, and repeatable because they are purposefully engineered. They are designed with innate systems of adaptation that track various aspects of their cave environment and respond accordingly. Christ the Creator has designed creatures such as the Myriapoda with complex proteins called detectors (sensors) embedded in the cell membranes that detect and tightly track changes in the environment. In other words, evolution has nothing to do with this divinely engineered system of adaptation to cave-dwelling. When studying this fascinating population of cave-dwelling centipedes with its obvious design features, creationists give glory to the Creator, not the creation.4