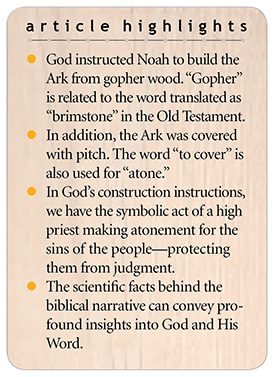 Scientific facts can sometimes yield surprising biblical insight. For example, lignins make hardwood trees hard. They are a complex group of organic compounds found in the cell walls of plants that give structural rigidity to the plants’ overall growth and architecture. One type of plant lignin contains sulphur, while the other is sulphur-free. It’s the sulphur-bearing lignins that form the fundamental structural basis of all hardwood trees used for lumber products.

This botanical fact casts an interesting theological light on Genesis 6:14, where God instructs Noah to build a large ship. The Ark allowed him and his family (eight people total) and various representatives of the animal kingdom to survive the impending global Flood and repopulate the earth. Specifically, Noah is commanded, “Make yourself an ark of gopher wood.”1

Much confusion has been connected to the term “gopher wood.” No one seems to know exactly what the Hebrew word  גֹפֶר, or gôpher, really means, and this is the only place in the Bible where it’s used. The King James and the New King James versions wisely leave the word untranslated. Other Bible translations have inserted different types of wood, such as cypress, but this is speculation.

When we dig deeper into the Hebrew, we begin to find enlightening connections. Gôpher is actually a root of the word גֹפֶרית or gophrîth, which is translated seven times in the Old Testament as “brimstone” in the context of God’s fiery judgment on human wickedness.2 Examples would be Genesis 19:24: “Then the LORD rained brimstone and fire on Sodom and Gomorrah”; and Psalm 11:6: “Upon the wicked He will rain coals; fire and brimstone and a burning wind shall be the portion of their cup.” 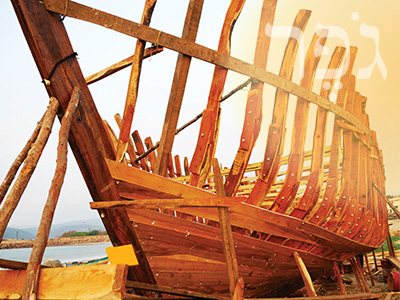 The New Testament Greek equivalent of gophrîth is θεῖον, or theion, and just like in the Old Testament it’s used exactly seven times within the context of God’s judgment on wickedness—a remarkable mathematical coincidence.3 The number seven represents completion, perfection, and veracity, as noted in the seven-day creation week and in Psalm 12:6: “The words of the LORD are pure words, like silver tried in a furnace of earth, purified seven times.” The number seven is even used in reference to God’s displeasure of humanity’s sinful traits, as stated in Proverbs 6:16: “These six things the LORD hates, yes, seven are an abomination to Him.” But even more intriguing is that the biblical use of the Greek word theion is essentially the same as the similar word θείο, or theío, which means sulphur and can be used interchangeably with the word “brimstone.”

When we put these original biblical terms into the context of the organic compounds that form the structural basis of trees and industrial applications of lumber, the coincidence is remarkable. For all practical purposes, God is speaking a scientific truth to Noah in telling him to use a form of plant material with sulphur-bearing lignin. Furthermore, since the word “wood” (i.e., “tree” or “timber”) in gopher wood is the plural form of the Hebrew ְעץ (‘êṣ), this fits well with the fact that wooden ships are typically built of many types of hardwood. Some woods work well for the ship’s hull, while others are used for support structures, deck planking, and other features—yet all would be sulphur-bearing tree kinds.

Given the great depth of God’s wisdom in Scripture, the scientific truth of sulphur-bearing lignified plant tissue yields profound insight into His eternal purposes in judgment and redemption. Noah is also told in Genesis 6:14 to “cover [the Ark] inside and outside with pitch.” The word “cover” is the Hebrew word כפָרַ, or kâphar, which literally means “to cover” and by extension means “to insulate” or “to atone for (by covering).” This word is widely used in Mosaic law to describe the process of the high priest making atonement for the sins of the people (i.e., by covering those sins as if thereby protectively insulating the people), such as on Yôm Kippûr (“Day of Atonement”). An example would be Exodus 30:10: “And Aaron shall make atonement upon [the altar’s] horns once a year with the blood of the sin offering of atonement.”4

A related and similar word used for pitch, כפֹרֶ, or kôpher, most often describes the “covering” payment of a ransom for one’s life or that of an entire village. In other words, we have the symbolic act of a high priest making atonement for the sins of the people—insulating and protecting them from judgment. The very materials used in the construction of the Ark not only convey protection from the judgment of the floodwaters but a deeper layer of meaning in the protection against a sulphurous fiery judgment in the afterlife.

The deeper we dig into the treasure chest of Scripture, the more nuggets of truth we uncover. Practical biblical truth and profound examples of judgment and redemption can be found throughout Genesis. Both the Ark and Noah serve as foreshadowing types of Christ, and much has been written about them in this respect.4

Every detail of the Ark’s construction shows God's care, love, and redemptive purposes.

Even the scientific reality of biblical truth has much to reveal not only about the veracity of God’s Word but about the omnipotence and eternal genius of our mighty Creator and Redeemer. Every detail of the Ark’s construction shows His care, love, and redemptive purposes.