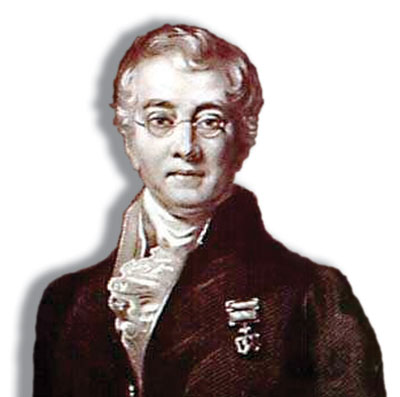 Sir Charles Bell--anatomist, surgeon, physiologist, natural theologian--was the youngest of four sons. While still a student at the University of Edinburgh, he taught anatomy and published A System of Dissection Explaining the Anatomy of the Human Body, which showcased his extraordinarily accurate illustrations. He later published volumes of Anatomy of the Human Body with his brother, well-known surgeon John Bell.

Charles' surgical success at the Edinburgh Royal Infirmary and John's popular anatomy classes--and outspoken criticism of the suffering inflicted by incompetent surgeons--led to jealous opposition from local physicians. Eventually the two brothers were barred from practice and teaching in Scotland, and in 1804 they moved to London and opened a private surgery and school of anatomy.

In 1811, Charles published Idea of a New Anatomy of the Brain, now considered the "Magna Carta of neurology." After John's death in 1820, Charles continued to teach and conduct research. He was also a surgeon at the Middlesex Hospital, helping to found its medical school in 1828.

Bell had a special interest in the nervous system. For a time, he assumed that all nerves were sensory. His work caught the eye of Francois Magendie, who had demonstrated that the ventral roots of spinal nerves are motor and the dorsal roots are sensory. After a conflict of priority arose, the two scientists reached an agreement and named the rule of spinal nerve function "Bell-Magendie's Law."1

Bell's scientific endeavors convinced him of the existence and necessity of the Creator. His 1837 publication The Hand; Its Mechanism and Vital Endowments, as Evincing Design affirmed his convictions:

If we select any object from the whole extent of animated nature, and contemplate it fully and in all its bearings, we shall certainly come to this conclusion: that there is Design in the mechanical construction, Benevolence in the endowments of the living properties, and that Good on the whole is the result.2

From studying the human body, Bell realized how dependent people are on involuntary physical processes. He saw close-minded reliance on reason as not only ignorant, but "worse than ingratitude."

Now, when a man sees that his vital operations could not be directed by reason--that they are constant, and far too important to be exposed to all the changes incident to his mind, and that they are given up to the direction of other sources of motion than the will, he acquires a full sense of his dependence....

When man thus perceives, that in respect to all these vital operations he is more helpless than the infant, and that his boasted reason can neither give them order nor protection, is not his insensibility to the Giver of these secret endowments worse than ingratitude?3

He was familiar with uniformitarianism, which influenced the development of Darwinism. Bell thought science should be allowed to follow the evidence--even if it leads to a supernatural origin.

We cannot resist these proofs of a beginning, or of a First Cause. When we are bold enough to extend our inquiries into those great revolutions that have taken place, whether in the condition of the earth, or in the structure of the animals which have inhabited it, our notions of the "uniformity" of the course of nature must suffer some modification.4

Bell was made a fellow of the Royal Society in 1826. He later received its first medal, and in 1831 was knighted by King William IV. At age 62, he returned to his homeland as a Professor of Surgery at the University of Edinburgh. His death six years later marked the end of a groundbreaking career in medical science and a humble witness to the intelligent and benevolent handiwork of the Creator.