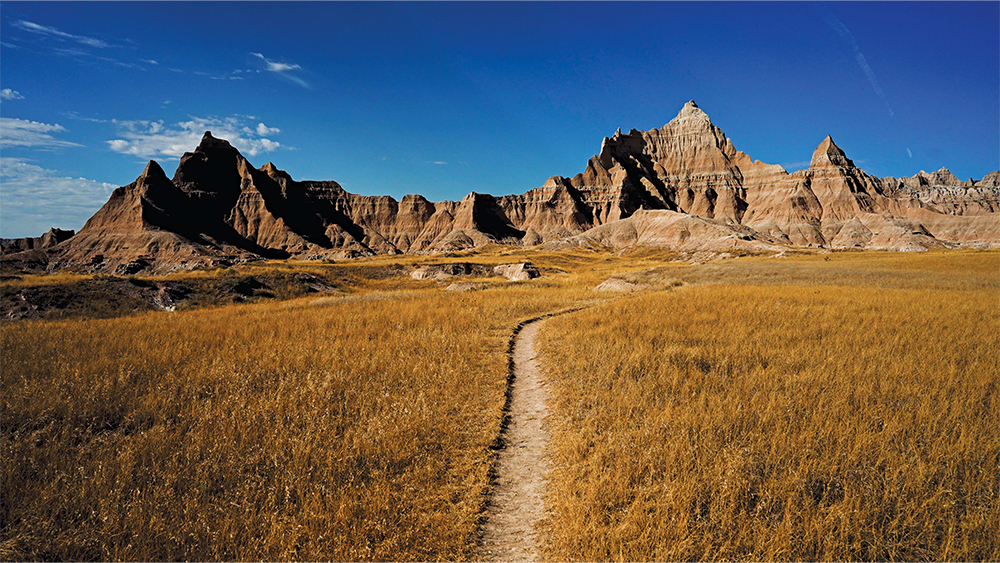 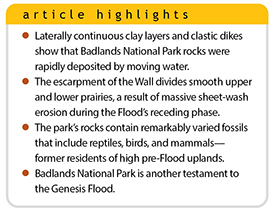 Visited by over a million people a year, Badlands National Park is just over an hour east of Rapid City, South Dakota, and covers around 380 square miles. National park status was designated in 1978, but it was previously established as a national monument in 1939. The Native American Lakota people called the area “mako sica,” literally “bad lands.” French fur trappers called it “les mauvaises terres á traverser,” or “bad lands to travel through.”1

Although early people groups might have had little use for this rugged terrain, it contains spectacular multicolored pinnacles, cliffs, buttes, and gullies that exhibit Flood depositional processes and erosion. The fossils found in the park also reveal a pre-Flood ecological habitat.

Clay layers and clastic dikes are two features indicating that Badlands rocks were rapidly deposited by moving water. Conventional science has maintained that clay-rich rocks were deposited over vast ages as sediment slowly settled out of stagnant water. Many scientists have used these claims as arguments for an old earth. Clay, the most common sediment on Earth, does settle out of stagnant water today, but the rocks we observe across the globe didn’t form that way.

Clay-rich rocks like shale and mudstone exhibit fine laminations, or thin-bedded layers. Experiments demonstrate that laminated clays form only in energetic settings involving moving—not stagnant—water.2 These results match predictions of creation geologists, who interpret clay, mudstones, shales, and nearly all sedimentary rocks as being deposited rapidly during the yearlong Flood.

Clastic dikes are dispersed throughout the park’s rocks and are about six inches to a foot thick. These features are another indicator of rapid deposition. A clastic dike is essentially sedimentary material that’s forced through fractures during dewatering. Clays hold water in the spaces between minerals. In fact, water content is sometimes as much as 50%.

As more sediment piles on top, it squeezes the layers below, pushing the water out. The built-up water pressure fractures the sediments above. Because the water is released under high pressure, it carries some of the clastic (clay and sand) sediment up the fractures along with the water. This leaves the sediment-filled fracture as a clastic dike.

Why did this occur in Badlands? It’s because all the clay layers were deposited quickly. They didn’t have time to dewater slowly since too much material was being continually deposited during the Flood. Instead, we see evidence of catastrophic dewatering that formed a vast network of clastic dikes. These features are clear evidence of fast watery deposition.

The Wall, as it’s known, is an erosional escarpment that runs roughly east-west through Badlands, dividing the upper smooth prairie from the nearly flat prairie about 200 feet lower.1 It’s about 60 miles long and three to five miles wide. The Wall delineates the upward edge of erosion of the soft clay and volcanic sediments that make up Badlands. Erosion of this cliff provided the park’s rugged topography.

Conventional scientists claim the Wall’s erosion occurred slowly over a half-million years through the action of rivers and streams.1 But the lower prairie is nearly devoid of badlands remnants. Where did the eroded sediments go? Rivers mostly transport material in defined channels, carving solitary gullies. They don’t erode broad swaths of the landscape like we see across the lower, nearly flat prairie.

The best explanation for the Wall and the mostly level prairie landscape below is the receding phase of the Flood. Early in this phase, the area experienced catastrophic deposition, providing the clays and ash layers that compose Badlands park. But as the floodwaters continued to recede, massive sheet-wash stripped away the sediments that were freshly deposited, completely transporting the sedimentary layers south of the Wall.

The lack of erosional remnants across the prairie is one evidence of this massive sheet-wash. It carried the Badlands sediments to locations as far away as the Gulf of Mexico.4 The Wall and the badlands we observe today mark the location where the massive erosion ended after the floodwaters drained off the continent. This resulted in the cliffs, gullies, and pinnacles of the Wall and the flatter topography of the lower prairie surface. Today’s erosion is much slower by contrast, at mere inches per year.1

The rocks of the park contain a remarkably varied collection of fossils, including lizards, alligators, and turtles, along with birds such as eagles, owls, gulls, and pelicans.3 Large mammals are also found—horses, camels, rhinos, tapirs, pigs, squirrels, beavers, rabbits, sheep, and even cats and dogs.1,3 One of the feline species is a type of saber-toothed cat called Hoplophoneus.1

Where did these fossils come from? They were likely swept off the highest pre-Flood uplands after the lowland environment that contained the dinosaurs was inundated and buried.4 This upland zone was where most humans and large mammals likely resided, along with many flowering plants.4,5 This entire ecological zone was spread on top of the dinosaur-bearing layers as the floodwater began to recede. The carcasses carried in the water were buried in the clays and silts shed from the rising Rocky Mountains in an area that includes the Black Hills. The volcanic ash that’s mixed in came from volcanoes that were actively erupting across the American West at the time.

Badlands National Park is a showcase for the Flood. It provides visible evidence of rapid deposition, catastrophic dewatering, and rapid erosional processes. It also contains a diverse collection of animals swept from the highest pre-Flood hills. Interpreted in this way, a visit to Badlands National Park will build confidence that God’s Word is true. The global Flood was a real, historical event that happened just 4,500 years ago. 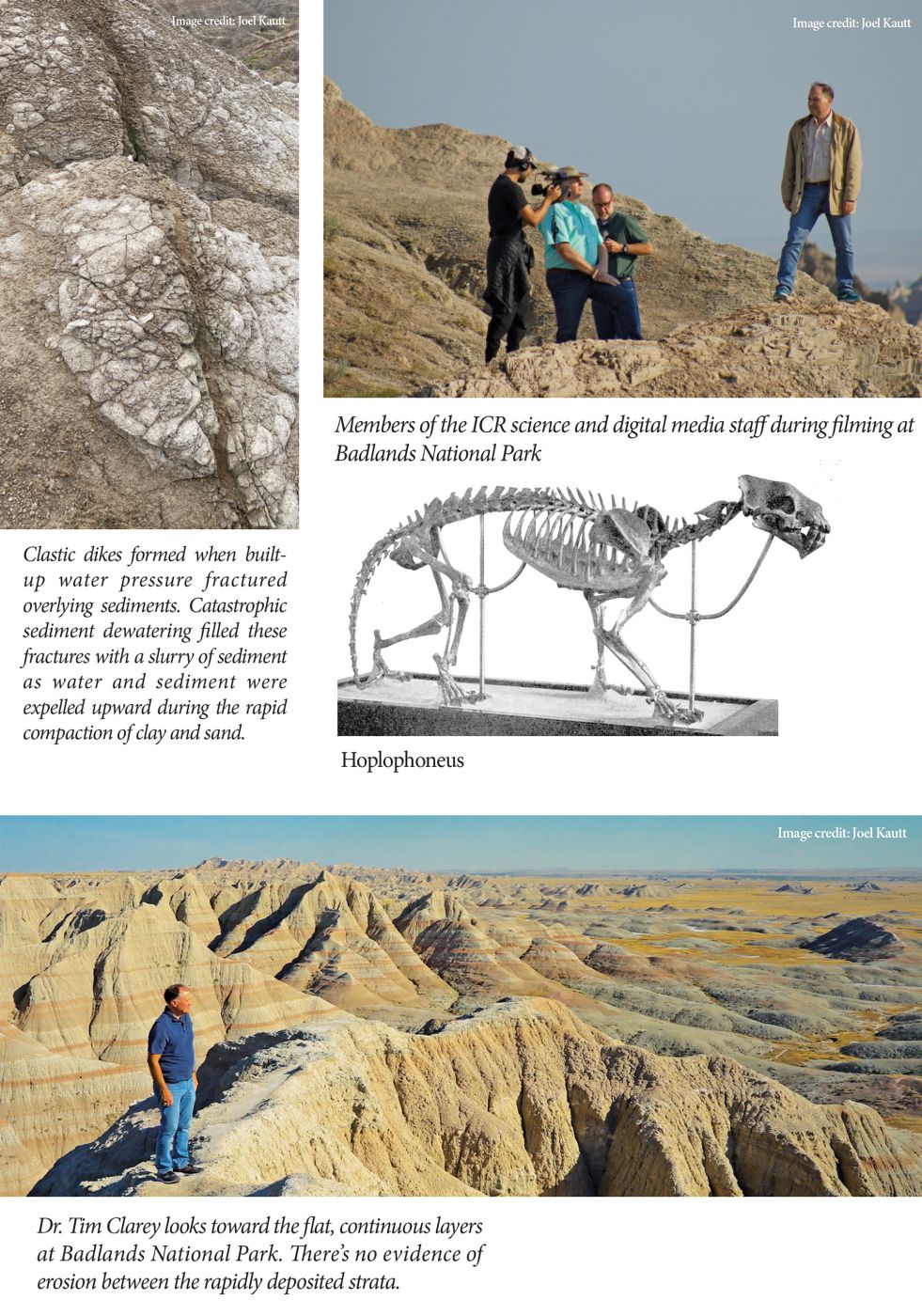