In our March 2008 Acts & Facts, we introduced you to Boris, the 9-foot-tall cave bear that greets our visitors in the ICR lobby, and Levi (short for Leviathan) the mosasaur, which we acquired in a natural science auction. Continuing that collection, on October 25 we purchased a rare juvenile Edmontosaurus skeleton that is over 90 percent complete. The specimen measures 10 feet long and 5½ feet tall, and will be quite impressive for our museum visitors when it has been installed. Such skeletons of nearly complete juveniles are almost unheard of, making this an extremely valuable exhibit and teaching tool. 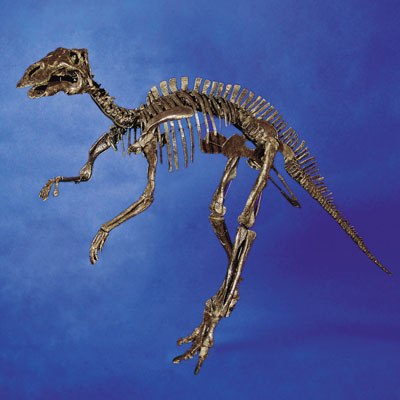 Edmontosaurus, a member of the Hadrosaur family, is known by its prominent duck-like beak. These dinosaurs were herbivores (plant eaters) and were evidently a favorite prey of carnivorous dinosaurs, for sometimes bite marks are found on them that match T. rex tooth patterns.

There have been numerous Edmontosaurus fossils discovered, but only a few have been juveniles. The one we acquired was excavated from the Two Medicine Formation in Montana, which is dated conventionally as late Cretaceous, approximately 70 million years ago. This formation was obviously water deposited, consisting of a mixture of terrestrial sediments and volcanic ash. In close proximity were fossils of both a second juvenile and a partially complete adult, giving rise to fanciful stories of mother and siblings crossing a river and being suddenly trapped in rising water.

Evolutionary scientists need to remember that fossils are not "snapshots of life," but are rather buried carcasses. The animals did not necessarily live nearby, nor did they necessarily die nearby. The only thing we know for sure is that they were all buried there, in a transported death assemblage, and do not automatically represent an intact ecosystem. They may have lived some distance away and then were drowned, transported, and buried with plants and animals from completely different environments.

The deposit speaks of monumental, catastrophic processes quite unlike similar depositional processes today. The volcanic sediments are not simply air-fall from a volcanic cloud; rapidly moving water currents were required to transport this volume of material. The thick layer of sediments must be from a distant source, for no local source matches, and the formation can be traced laterally for hundreds of miles. No sluggish stream built up the strata of the Two Medicine Formation.

The Edmontosaurus fossil that ICR purchased was offered at auction here in Dallas, but it had no bidders. ICR was able to negotiate a substantially reduced price, for which we are thankful. The auction brochure described the skeleton as "mounted on a beautifully designed minimalist base, custom fitted with high quality castors for ease of mobility." The base was described as "intelligently designed."

Isn't it interesting that anyone can recognize evidence of design except for those who evaluated this intricate skeleton? It evolved, according to evolutionary thinking, by random mutation and mindless natural selection, with no intelligence involved. ICR plans to house this specimen in a future museum on our Dallas campus, and we look forward to using it to counter such ludicrous claims.

NEWS
Do People and Wild Apes Share a Common Language?
There are a host of scientific problems with evolution. One egregious difficulty is an untestable proposition that people (and primates) evolved from...
BY: FRANK SHERWIN, D.SC. (HON.)