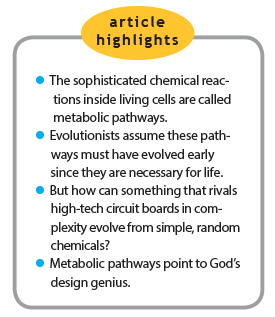 We read in Genesis 1 how God created the universe and everything in it—from people, animals, and plants to planets and stars. Life is incredibly complex, having been created that way “in the beginning.” Indeed, there is no such thing as “simple” life.1

God created the majority of life forms as cellular organisms—from single-cell protozoa to huge multicellular creatures such as blue whales. Even bacteria and plants are cellular in nature, despite the unique construction of their cell walls.

In biochemistry, a metabolic pathway is a linked series of chemical reactions occurring within a cell that leads to the formation of one or more functional products. Metabolic pathways are the means living entities use to convert, via enzymes (proteins), one compound into another. Such pathways are found in all living creatures.

A molecule that starts a chemical pathway inside a cell is called a substrate, a substance on which an enzyme acts. Enzymes are also called biological catalysts and are designed to make biochemical reactions proceed with incredible speed. When an enzyme connects with a substrate (reactant molecule), the substrate breaks into two product molecules (products) while the enzyme remains unchanged and immediately connects with another substrate. These reactions occur in a fraction of a second.

In each moment of cell life billions of substrates are transformed into billions of products by billions of enzyme molecules. These reactions are extremely fast, and we can imagine the cell as a viscous environment where these reactions occur in an ordered (and only apparently chaotic) fashion. The whole body of these reactions is called metabolism.2

Cellular pathways begin outside the cell when a ligand (or first messenger) encounters a specific protein detector (or receptor) that is suspended in the plasma (or cell) membrane. A large family of these detectors is called G protein coupled receptors (GPCRs).3 These GPCRs are designed to detect specific biomolecules (ligands) outside the cell and initiate internal signal pathways inside the cell and, ultimately, create cellular responses such as the production of proteins.

Did These Pathways Evolve?

One must ask if these complex and ordered pathways are the result of time, chance, and random processes or the result of plan and purpose. In Lehninger’s Principles of Biochemistry, the authors state all the GPCR signaling mechanisms “must have arisen early in evolution.”4 But the phrase “must have” is hardly a scientific explanation and fails to describe any form of step-by-step Darwinian origin for this elaborate mechanism. For example, the sense of smell (olfaction) in people and other mammals is due to GPCRs, but “little is known about how olfactory receptors function in mammals, or how this large gene family has evolved in response to different evolutionary challenges.”5

Four years after that statement, the supposed evolution of these fascinating pathways remained unknown. As reported in the Annual Review of Biochemistry, “The emergence of the pathways that now comprise core and central metabolism, or even intermediate metabolism, is particularly enigmatic.”6

Indeed, other evolutionists see the obvious design in these living pathways (albeit without acknowledging the designing Creator) and rightfully compare them to human technology. A parasitology textbook commented on internal cellular reactions in protozoa and “the multitude of other metabolic events that make biochemical pathways look like printed circuits of high-tech electronic equipment.”7

Only God can create life. At the subcellular level, we see the enormous complexity that is the work of His hands, and these pathways lead us to Him.

* Frank Sherwin is Research Associate at the Institute for Creation Research and earned his M.A. from the University of Northern Colorado.