Made in His Image: Designed Control Systems | The Institute for Creation Research
Skip to main content

Some people like the thrill of driving or flying. For them, all the talk about fully automated cars and planes—which would relegate drivers and pilots to passenger status—is dreadful. For others, though, that day cannot get here soon enough. Since cars and planes already exist, the great engineering challenge of automating them is to design control systems fully capable of self control while the vehicles traverse various conditions.

Designing today’s control systems is hard work. Engineers who develop automated cars and planes will need to install multiple sophisticated systems. Conceivably, these could all be completely different types of systems, though areas of integration and overlap are likely. For example, an automated passenger jet would need to control the engines, wings, rudder, and landing gear quite rapidly. Passengers would enjoy systems that not only can control gradual adjustments to cabin temperature and pressure but can also make rapid adjustments if urgently needed. Amazingly, our bodies already have many design features conferring fully automated control that have eclipsed human-engineered systems by millennia. When we reverse-engineer the human body by taking it apart to study it, we find the familiar fast neurological system and a relatively slower, less familiar endocrine or hormonal system. Let’s become more acquainted with our endocrine system.

Almost everyone has heard of growth hormones, estrogen, testosterone, and adrenaline, and most people are familiar with the exciting effects these hormones have on influencing the way we look or perform. So when talking about the endocrine system, it’s tempting to jump to a discussion of a hormone and its mechanism of action. However, our bodies need some process for slow and steady maintenance and growth. When we approach it as a fascinating display of how vital control systems are designed, then investigating the way the endocrine system generally exerts its type of steady, long-term guidance over growth, development, and daily homeostasis is also exciting.

Endocrine control happens through molecules called hormones. Tissues that produce hormones build them from a cholesterol or lipid (a fat molecule) framework, or link amino acids into proteins. Because hormones work to regulate specific target organs or tissues, it only takes tiny amounts of a given hormone to produce very large effects, though a few types of hormones are released in large quantities. Most hormones, therefore, circulate in the bloodstream in extremely small concentrations. Fittingly, the tissues that produce them are quite small when compared to the body as a whole or even to a single organ. In fact, if all of the endocrine-producing tissue from an adult were collected, it would weigh only about one-quarter of a pound. 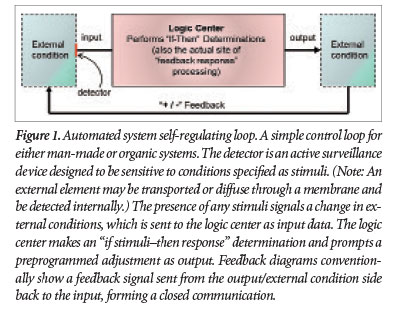 Automated system diagrams conventionally show a feedback signal sent from the output/external condition side of the process back to the input, forming a closed-communication, self-regulating loop (see Figure 1). Note that sometimes a measurable signal is sent back to the logic center. More often, the output simply changes the external conditions, which are continuously monitored by detectors, and the logic center self-adjusts the entity accordingly—i.e., the feedback step.

In living things, the identifiable parts are the detectors (called receptors in biology) associated with cells to sense the presence of a specified stimuli (i.e., the hormone), an information-based logic center within the cell, and output “controllers” (like an enzyme) to make the determined changes. The big picture of endocrine control illustrates how these regulatory elements work together.

Central nervous and endocrine systems integrate together to control the whole body. But independent systems do not just happen to work together. The activity of both is bridged by another designed system—a utility system called an interface that coordinates functions from both the central nervous and endocrine systems. Therefore, from a design standpoint, researchers should expect to find many types of interfacing elements within our human body. These necessary elements are indeed found in abundance, and the dominant interface structure linking the nervous and endocrine systems is the hypothalamus. This is a small, specialized extended segment of brain located in the mid-central region. All designed interfaces must possess at least one feature of both linked entities in order to function, and the hypothalamus has neurological tissue and produces hormones.

On the endocrine side, some hypothalamic hormones regulate an important gland called the pituitary. Anatomically, a short, slender stalk connects the pituitary below the hypothalamus. The hypothalamus may store its own hormones in a portion of the pituitary gland for release, or stimulate the pituitary to release its own repertoire of hormones into circulation. Numerous target organs or tissues detect hormones from either source. These targeted areas include bones, muscle, breasts, gonads, or the adrenal and thyroid glands (see Figure 2). Finally, the automated loop of the control system is closed when hormones produced by these tissues enter circulation and are detected by the pituitary and hypothalamus, which then self-modify their regulatory activities. 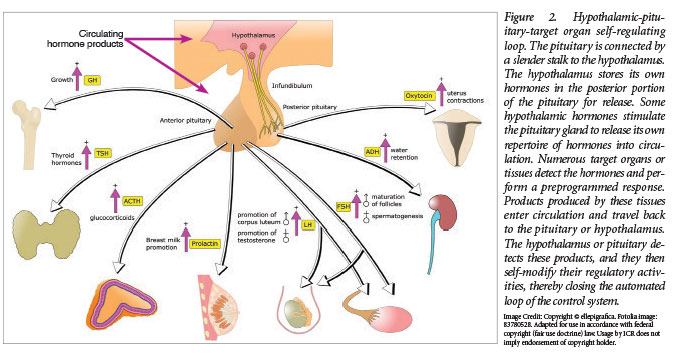 The origin of any regulatory or interface system is, without exception, the product of an intelligent mind. It makes no scientific sense to explain the origination of any regulatory system as due to the “selective” powers evolutionists project onto nature. In fact, the mind behind the design of these systems must possess a thorough understanding of how every tissue functions and works together in perfect orchestration…equating to an astounding understanding. That mind is found in the Lord Jesus Christ, our infinite Creator. Our normal response to His marvelous creation should be the awe-inspired praise, “O LORD, how great are Your works! Your thoughts are very deep” (Psalm 92:5).