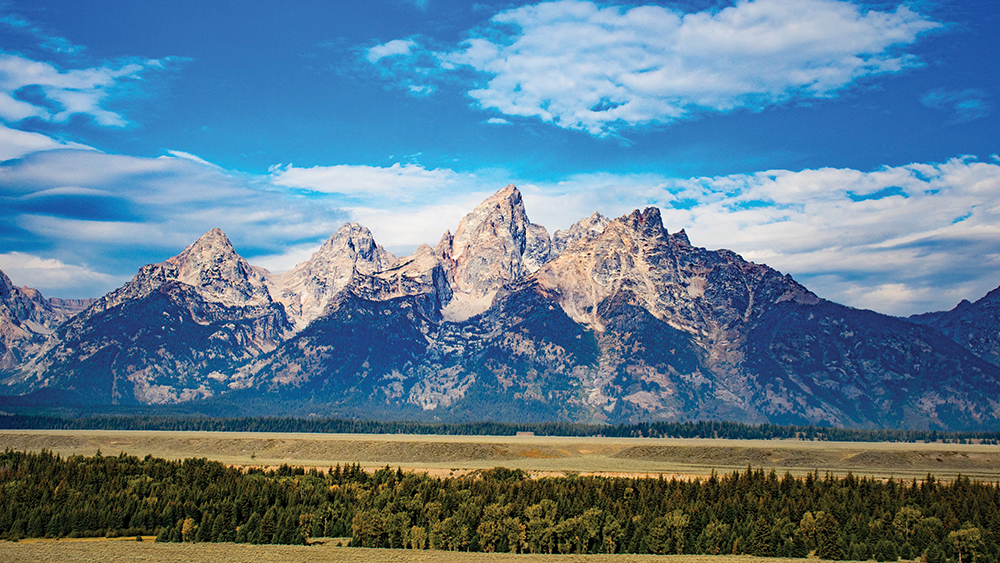 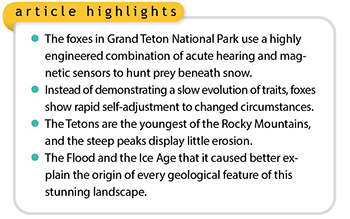 Just south of Yellowstone National Park lies one of the most picturesque mountain ranges in the western United States—the Teton Range, established as a national park in 1929.1 When viewed from the east, the Tetons seem to shoot straight out of the plains. Their stark, jagged peaks rise to heights above 13,000 feet, while the valley floor with its sage and wildlife lies at only 6,000 to 7,000 feet.

While we were hiking around Jenny Lake at the foot of the Tetons during ICR’s 2021 science expedition, a bold fox crisscrossed our trail. During winter, these foxes hunt prey they can’t even see. Small mammals crawl beneath several feet of snow, yet foxes find them. How do they know where to look? 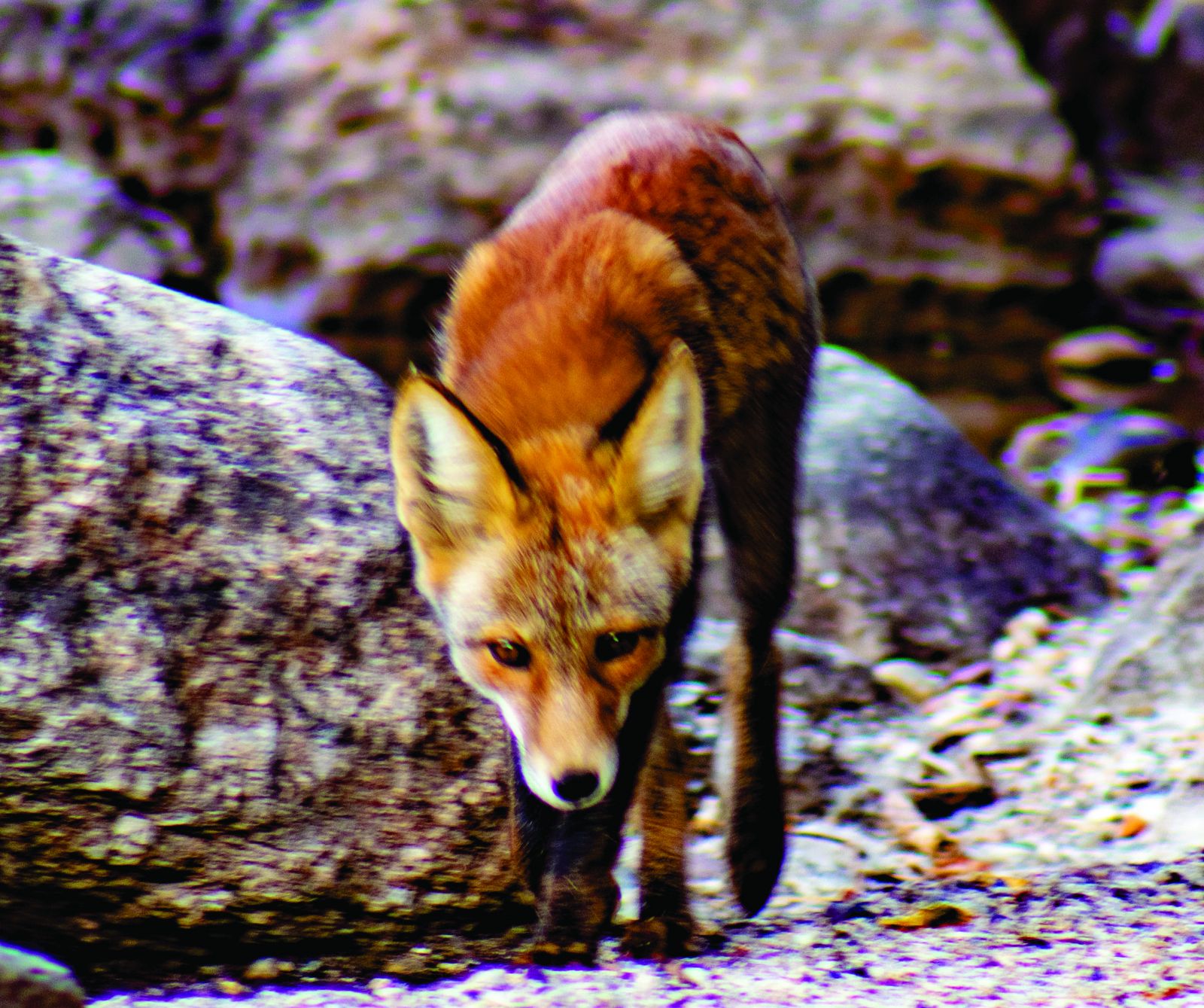 Hearing helps, of course. The fox pauses, tilts its head to pinpoint the prey, then takes a bounding leap and plunges, paws and nose first, straight down into the snow. It then emerges with a meal in its mouth. Researchers noticed that a fox finds food an astounding 74% of the time when it attacks “about 20º clockwise of magnetic north.”2

Foxes facing east or west returned a dismal 18% or less hunting success rate. So, the researchers tested for evidence that foxes have magnetic sensors. The study authors described how the foxes might mentally merge sight, sound, and magnetism.

A fox moving in a fixed direction when approaching its prey (i.e., moving to the north), could approach until a specific component of the visual pattern generated by the magnetic compass is superimposed on the source of the sound from the prey, so that it could initiate an attack from a fixed distance.2

Where could a well-integrated and effective biological system such as this come from? The researchers asserted that it had all somehow evolved. That’s like saying it happened by magic. What steps supposedly occurred? What observations even hint that environments, foxes, or any natural condition or combination of natural factors could ever invent something as intricate as a magnetic sensor, let alone combine magnetic, visual, and sound information into a single accurate picture? 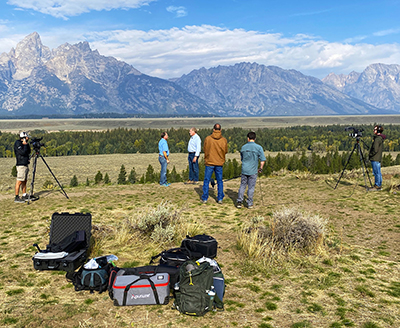 Perceptive problem-solvers, not natural processes, craft sensitive instruments like this. These foxes have a superpower. They must have therefore come from a super-powerful Maker.

How many generations do you think it would it take to turn the snarl-and-snap behavior of wild foxes into the friendly approach of domestic dogs? Evolutionary ideas of creature changes demand long periods of time. Charles Darwin wrote:

For the process of modification and the production of a number of allied forms must be slow and gradual—one species giving rise first to two or three varieties, these being slowly converted into species, which in their turn produce by equally slow steps other species, and so on.3

Darwin devotees point to random mutations as the source of changes in DNA that lead to changes in body and behavior. These happen slowly also, building up over many generations. Evolution trains us to think in terms of long ages.

Researchers tested this question by breeding 130 wild-caught foxes for what they called “tameability.” They crossed the friendliest fox parents over many generations. Imagine their surprise when “the aggressive and fear avoidance responses were eliminated from the experimental population in just two-three generations of selection.” At the sixth generation, fox pups eagerly sought human contact, complete with wagging tails, “whining, whimpering, and licking in a dog-like manner.”4

So much for the necessity of ages of mutations. Rapid domestication fits supernatural creation. Why not praise the Lord Jesus since all things, including foxes, “were created through Him and for Him” (Colossians 1:16)?

The rocks that make up the Tetons, the youngest of the Rocky Mountains, are exposed granite. This rock type probably formed from melt before Noah’s Flood, but the sedimentary units that surround it came from the Flood. Catastrophic deposition of about 4,000 feet of early Flood sediments (Paleozoic), 15,000 feet of middle- and high-water Flood rocks (Mesozoic), and up to six miles of receding Flood rocks (Cenozoic) fill nearby areas such as Jackson Hole.5

The rock layers that lie deep beneath the ground at Jackson Hole show the same patterns of rocks as similar layers on every continent.6 Marine-dominated sediments began accumulating as tsunami-driven floodwaters progressed higher and higher from Day 1 to Day 150 of the Flood year. As the waters began to recede after Day 150, they deposited thick layers (the Tejas Megasequence).7 These include volcanic rocks from Yellowstone’s eruptions, and thick sands and shales eroded off the rising Rocky Mountains.

The Tetons form a fairly straight, steep mountain front because of a massive, fast-growing fault called the Teton fault.8 Most of the Rocky Mountains emerged early in the receding Flood as thickened continental crust rose rapidly.9 But the Teton fault occurred later when the Flood year was nearly over. Like a mammoth trap door, Jackson Hole fell over 15,000 feet, while the Tetons rose over 13,000 feet in a matter of days or weeks. These mountains popped up nearly overnight.

The same rocks found on the top of Teton’s Mount Moran are found 30,000 feet beneath Jackson Hole. What kind of extreme forces accomplished all this geological work? Nothing that fast and violent happens in today’s slow processes. Nor do today’s processes elevate mountains.

These clues point to unimaginable catastrophe. When did this catastrophe happen? Millions of years should have rounded the Tetons’ peaks by now, but they remain tall and sharp. Noah’s recent Flood fits all these features. 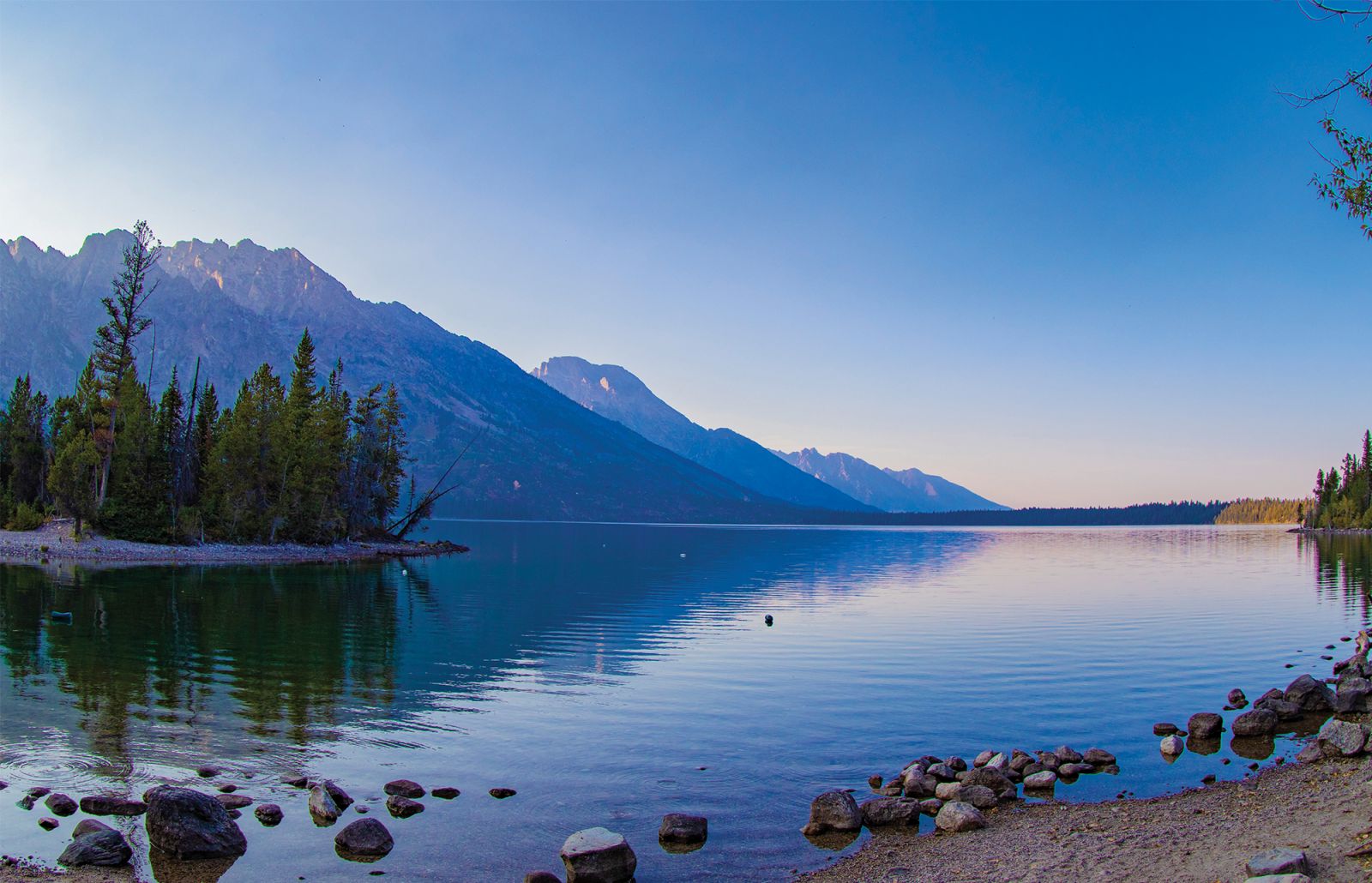 Broad U-shaped valleys separate the individual Teton Range mountains. How and when did these valleys form? Just a few hundred years after the Flood, the Ice Age was at full strength.10 Ice collected into alpine glaciers on the newly uplifted Tetons. The snake-shaped ice sheets carved out swaths of rock as they slid down the slopes.

Some glaciers deposited piles of rocks, sand, and clay across Jackson Hole, damming the Snake River. Two of these earthen dams formed today’s Jackson Lake and Jenny Lake at the foot of the Tetons. The Flood and the Ice Age it caused explain the origin of every main feature of this stunning landscape.

We hold our Bibles in hand when we think about this awe-inspiring park. The Genesis Flood supplied the power to make mountain ranges. Post-Flood conditions led to enough ice to carve the ridges and leave behind the sharp peaks we see today. Finally, creation offers the most sensible answer to the origin of well-integrated and engineered biological systems like acute hearing and magnetic sensors in foxes.11

How wonderful to discover such tight matches between science and Scripture in such a beautiful place.