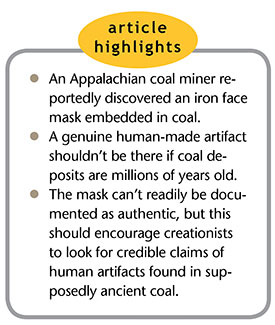 I was recently contacted by an older lady1 who grew up in the coal mining area of Appalachia. Her ancestors had lived in the area for generations, and she related how her miner father, now deceased, had made a remarkable discovery embedded in a coal seam—a human face made of cast iron!

Like most people, they had been taught that coal is far too old to contain any human artifacts. The miner was so proud of his find that it became a source of family pride and was simply named “Man.” As a large, heavy object, it was used as a doorstop for decades and later stored among his belongings. She distinctly remembers her father’s story and the care he took for his “pride and joy.” She recently rediscovered it among her father’s possessions.

Creationists know that nearly all coal seams, particularly Appalachian coals, were formed by the Flood of Noah’s day, as low-lying coastal forests were uprooted en masse, transported, and redeposited during the great cataclysm. Coal typically retains the chemical signature of these pre-Flood swampy forests that were buried in enormous deposits, where heat and pressure altered the organic material into coal. Since the plants typically found in coal were not from the environments in which humans or mammals lived, we wouldn’t expect their remains to be commonly fossilized with them. Human remains would scarcely have survived the Flood’s turmoil, but perhaps their artifacts might make it, buried in various sediments.

The miner had difficulty discerning what the artifact was in the dim light underground, but when he cleaned off all the coal, it appeared to be a human face. Perhaps it is the representation of some long-ago individual, similar to death masks of important people made in recent times, like Abraham Lincoln and Theodore Roosevelt. Care was obviously taken to reproduce and preserve tiny details of the face—even the cracks and blemishes.

The procedure of creating the original mask would have involved covering the living (or more likely deceased) person’s face with a hardening material such as plaster in order to produce a reverse cast. A more permanent material was then poured into the resulting depression—in this case, melted iron. Once cooled, it preserved an exact duplicate of the face in the form of a three-dimensional mask.

Whatever the original cast consisted of, the mask is made of iron and is the size of a man’s face. It measures six inches at its thickest and weighs 50 pounds. The upper side shows the facial features, while the underside is flat. Protruding from its forehead is a “handle” of sorts that would’ve allowed it to be carried while hot.

Unfortunately, the fact that the mask was so well cleaned largely invalidates its use for scientific purposes, as do the memories (however accurate) of the descendants. Such anomalous fossils or artifacts, however, do provide creation advocates with an intriguing possibility. This iron mask provides encouragement, along with other similar artifacts that have been claimed as authentic, although no claim of proof of creation truth is made here.2

This mask may perform another vital task. It may stir the memories of other coal miners or their descendants who have maintained an artifact with the coal still attached, or better yet someone may know of, or discover, an artifact in situ (in position) without reliance on memories alone. Such an “outrageous hypothesis” as a human artifact found in a coal seam requires impeccable credibility. Unless an artifact is scientifically documented, it will not be acceptable in scientific circles.

* John D. Morris is President Emeritus of the Institute for Creation Research and earned his Ph.D. in geology from the University of Oklahoma.