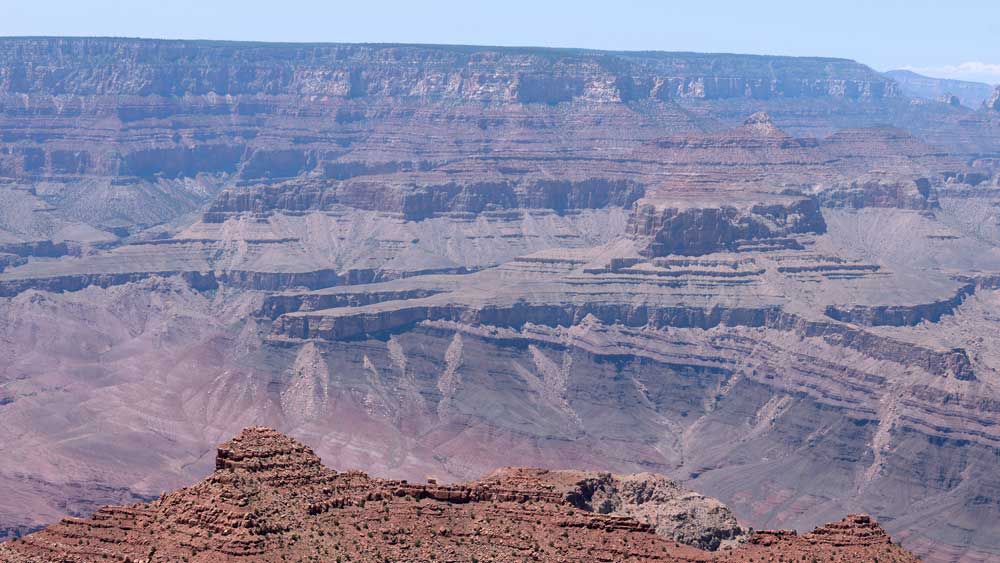 NEWS     CREATION SCIENCE UPDATE     THE GLOBAL FLOOD IS THE KEY TO THE PAST     GEOLOGICAL EVIDENCE INDICATES RAPID FORMATION     MUCH EVIDENCE EXISTS FOR A WORLDWIDE FLOOD     NOAH'S ARK AND FLOOD     EARTH SCIENCES RESOURCES
Great Unconformity Best Solved by Global Flood
BY TIM CLAREY, PH.D. *  |
MONDAY, SEPTEMBER 20, 2021
The Great Unconformity is one of the most baffling mysteries in the geological sciences.1 It is marked by a massive surface of erosion that appears all over the world at about the same time. Many studies have tried and failed to satisfactorily explain its global occurrence. Now a new report published in Geology claims to take a step forward in solving this mystery.2 Just like prior attempts, this research effort still falls short in providing an explanation for the universal nature of the Great Unconformity. The global Flood still remains the best solution.

A significant portion of the Earth’s crust, including some sedimentary layers, was simultaneously stripped off a majority of the world’s continents to make the Great Unconformity. This erosion occurred just prior to the deposition of the overlying fossil-rich sedimentary layers that we identify as Flood rocks.

There couldn’t have been much time between the erosion and the deposition, since the Great Unconformity surface is fairly flat in most places. And in many cases, it contains broken pieces of the underlying material. There are no gullies, ravines, channels or any other expected types of long-term erosion along the surface. The surface looks fairly flat and appears as if it was only planed off hours or days before the sediments were deposited on top.

And in many locations, the basal Sauk megasequence layers (the first Flood deposits that begin to cover the continents) deposited on the Great Unconformity coincide with the “Cambrian Explosion.” The Cambrian Explosion is as mysterious to secular geologists as the Great Unconformity.3 The Cambrian or basal Sauk layer is the unit where the first hard-shelled organisms show up suddenly in great numbers, full-formed, and without any ancestral forms in the rocks below.

Geologists have long struggled to explain what they interpret as perhaps a billion years completely gone from the rock record. In 2019, secular researchers claimed that the Great Unconformity could be explained by a massive episode of global glaciation, called “Snowball Earth.”4 They argued that about two to three vertical miles of rock were removed by glaciers between about 717 and 600 million years ago in three separate glaciations, creating the Great Unconformity surface.4

When another study from 2020 took a shot at explaining the mystery, they contradicted the 2019 study.5 These secular scientists concluded that much of the erosion took place prior to the so-called “Snowball Earth” event and/or may have been from multiple erosional events, instead of having formed during some claimed global glaciation.5

Whenever conclusions contradict, it’s a good bet that neither conclusion holds any water.

The present study was a collaboration of four scientists from the University of Colorado and the University of California, Santa Barbara.2 They used a new method called zircon thermochronology on rocks collected in Grand Canyon. This process records the so-called cooling history of the rocks which they claim serves as a proxy for erosional history.

They concluded that early faulting uplifted the western part of Grand Canyon, helping it erode down to the Precambrian crust while the eastern part was not uplifted.2 This preserved up to two miles of Precambrian sediment in the eastern sector. Furthermore, they claimed that these uplifts were part of the break-up of a fictional pre-Pangea supercontinent called Rodinia, which supposedly took place 700 million years ago.6 And that the final erosional event which planed off the landscape occurred just prior to the deposition of the fossil-bearing Cambrian rocks (Sauk megasequence).

This new study therefore fails to explain the cause of the “final erosional event.” The study authors talked all around the question of what caused the Great Unconformity without every answering it! All their paper really contributes is the possibility that differential faulting may have helped preserve pre-Cambrian sediments on the east side of Grand Canyon.

ICR acknowledges faulting in our Flood model, too. In fact, the Bible tells us about a major upheaval called the breaking up of the fountains of the great deep at the onset of the global Flood (Gen. 7:11). Maps compiled from geologic rock column databases show that faulting and volcanic activity occurred along both coasts of North America just prior to depositing the Sauk megasequence (Cambrian rocks).7 The Grand Canyon region was near the original pre-Flood continental margin.7 Faulting likely uplifted the western part of Grand Canyon and down-dropped the eastern portion, preserving some thick pre-Sauk sediments below the Great Unconformity.

Some of these preserved pre-Sauk sediments are possibly post-Creation Week and pre-Flood deposits, with some upper layers likely even earliest Flood sediments.7 These deposits were possibly created by processes associated with the bursting of the fountains on the day Noah’s Flood began.

We also acknowledge that a global erosional event occurred just prior to, and possibly along with, the deposition of the Sauk megasequence (Cambrian layers). This is the root cause of the relatively planar Great Unconformity surface. It takes a global cause to produce a global effect, and the Flood fits the bill.

Accepting the words of Jesus as true history in the book of Genesis eliminates much of the mystery of the Great Unconformity. We may not fully understand the processes that made this universal erosional surface, but we know that the global Flood provides the best cause.