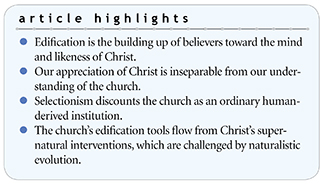 Can evolutionary theory be reconciled with the church’s basic functions of worship, evangelism, and the edification (building up) of believers? Last month we saw how evolutionism has a profoundly negative effect on evangelism.1 How does it affect a believer’s growth in the Lord?

Consider the challenges any church may face, as illustrated by a certain Bible church after it received “that letter.” Even though the church is only five years old, membership has already surpassed 1,400. The new building in a modern suburb was just completed. The church also operates a Christian school, has annual evangelistic meetings, and an impressive missions budget.

But in the January leaders’ meeting, the pastor read a letter from the local ministerial association. It requested several representatives from the church to help draft a biblical statement regarding the issues of sexuality and abortion. Unfortunately, discussion became intense about whether the Bible speaks clearly on these topics.

Debate centered on whether an embryo is fully human and whether a person’s gender is determined at birth. Some leaders thought the Genesis account of Adam and Eve’s creation in the image of God was instructive. Others asserted that the Bible doesn’t provide guidance in this area since it wasn’t written as a science textbook. All recognized that the crux of the issue boiled down to how Christians should interpret the Bible. The deacons deadlocked. The pastor was silent. They decided to let the congregation appoint a committee to develop Bible interpretation rules.

The congregational meeting didn’t go any better. Discussions exceeded two hours on how to interpret Genesis. Some participants split hairs on what the words “morning and evening” meant or what type of “light” God created. Some believed it was naïve to exclude human evolution. Others felt that biblical authority was being weakened. Most were upset about why Bible interpretation even needed to be discussed and thought that the church was squabbling over a minor issue. The committee was not appointed.

After that, Bible interpretation was the hot topic for months. Members formed groups based on whether they thought the Bible was inspired to be clear enough that believers could understand it for themselves or whether Genesis must be interpreted in the light of modern science. Without a unified biblical base, the discussions on biblical inspiration, clarity, the uniqueness of the church, or meaningful social issues ended. The pastor preached messages on unity but could not point to a common foundation on which to build agreement. In a conversation with a former seminary professor, he said that he better appreciates how principles of Bible interpretation undergird the development of doctrine. But he also wonders if “that letter” caused the church’s discord or simply exposed an unrecognized existing lack of unity of thinking.

Suppose you ran into the pastor at a café and invited him to join you for lunch. What might you say to him?

Edify means to “build up.” It connotes the building of an edifice, which is a solid structure. Several New Testament passages define the methods and results of this activity.

In Ephesians 4:11-15, the apostle Paul identifies the church not as a man-made organization but uniquely and spiritually as Christ’s “body.” Speaking to the building up of a body, Paul states:

And He Himself gave some to be apostles, some prophets, some evangelists, and some pastors and teachers, for the equipping of the saints for the work of ministry, for the edifying of the body of Christ, till we all come to the unity of the faith and of the knowledge of the Son of God, to a perfect man, to the measure of the stature of the fullness of Christ; that we should no longer be children, tossed to and fro and carried about with every wind of doctrine, by the trickery of men, in the cunning craftiness of deceitful plotting, but, speaking the truth in love, may grow up in all things into Him who is the head—Christ.

The church’s tools for building may seem to be familiar behaviors, but they are not “carnal” and always contain a spiritual element. They include Bible study for doctrine and guidance; prayer for power and guidance; self-examination to progress in sanctification; ordinances for instruction and reminder; fellowship for encouragement, spiritual assistance, and accountability; and the family for the growth of parents and training a godly heritage.

Evolutionism Maligns the Church and Its Tools of Edification

Clearly, the building of believers is strongly tied to the work of a church. What is believed about the church as a unique institution is extremely important. Evolutionism disparages the Bible’s truths about the church in two respects. As we saw in the article on worship,2 naturalistic evolutionism doesn’t regard the Lord Jesus as God and man. Rather, His exalted standing is denigrated as merely human.

Our appreciation of Christ is inseparable from our understanding of the church. The truth that the church is the living body of the supernatural Lord Jesus and has a distinctively spiritual characteristic is also fully discounted by evolutionism. Within that worldview, the church deserves no special distinction since it is merely one among many human-derived institutions doing good deeds similar to, say, the Elks, Lions, or Rotary clubs. Regarding certain tools of edification, no recognition is accorded to the supernatural aspects of Bible study such as the Holy Spirit enlightening a believer’s mind or a God who listens to—and has the power to answer—prayer.

Next, the value of Christian sanctification is demeaned by evolutionism. Shortly before his death, the eminent historian and humanist philosopher Will Durant explained, “By offering evolution in place of God as a cause of history, Darwin removed the theological basis of the moral code of Christendom. And the moral code that has no fear of God is very shaky.”3

Morality, or more strictly our belief in morality, is merely an adaptation put in place to further our reproductive ends....In an important sense, ethics as we understand it is an illusion fobbed off on us by our genes to get us to cooperate....Ethical codes work because they drive us to go against our selfish day-to-day impulses in favour of long-term group survival and harmony….Furthermore, the way our biology forces its ends is by making us think that there is an objective higher code, to which we are all subject....Ethics is seen to have a solid foundation, not in divine guidance or pure moral imperatives, but in the shared qualities of human nature and the desperate need for reciprocity.4

Of course, it takes a good deal of imagination by Ruse and Wilson to believe, without a shred of evidence, that their personification of biology as a clever trickster is truly causal for duping the vast majority of humans to believe they have a Creator when there supposedly isn’t one. Selectionism is how Darwin reintroduced veneration of nature back into science.5 Atheistic or theistic selectionism is the view that environments can exercise agency in molding the diversity of life. Their proponents’ belief is fed by their projection of volitional selective capacity onto nature to “favor,” “select for/against,” or “act on” organisms. Thus, selectionism is wielded as a pseudoscientific alternative to the supernaturalism that undergirds biblical edification.

The church’s function of edification is not at all like a 10-step self-improvement program. It is rooted in supernatural events, beginning with a miraculous second birth. A very direct expression of the implications of evolutionism for Christianity is found in the American Humanist Association’s Humanist Manifestos, which have a “basic foundation and rationale in an evolutionary atheistic world-view.”6 Many of the manifestos’ tenets appear to be widely embraced.

We find insufficient evidence for belief in the existence of a supernatural; it is either meaningless or irrelevant to the question of survival and fulfillment of the human race. As nontheists, we begin with humans not God, nature not deity….[Religions] inhibit humans from helping themselves or experiencing their full potentialities….We can discover no divine purpose or providence for the human species….Humans are responsible for what we are or will become. No deity will save us; we must save ourselves.7

Consider also that church attendees are exhorted to practice honest self-examination to see if they have believed on the Lord Jesus (2 Corinthians 13:5), are growing in His grace (2 Peter 3:18), and are becoming less conformed to ungodly thinking through a renewed mind (Romans 12:2). This tool of edification is challenged by evolutionary humanistic education, which asserts that “promises of immortal salvation or fear of eternal damnation are both illusory and harmful. They distract humans from present concerns, from self-actualization, and from rectifying social injustices.”8 A Christian could reasonably ask what scientific experiment these evolutionists did to support their definitive claim that heaven or hell is only an illusion. How would they even perform such an experiment? We should be attuned to religious statements by evolutionists that masquerade as science.

Possibly the most pointed confrontation of naturalistic evolutionism against edification is in the practice of prayer.

As in 1933, humanists still believe that traditional theism, especially faith in the prayer-hearing God, assumed to love and care for persons, to hear and understand their prayers, and to be able to do something about them, is an unproved and outmoded faith. Salvationism, based on mere affirmation, still appears as harmful, diverting people with false hopes of heaven hereafter. Reasonable minds look to other means for survival.9

Evolutionary humanism promotes the belief that in order for humanity to advance free from encumbrances, the supernatural core of Christian edification needs to be discarded like excess baggage. Humanism and selectionism are rooted in evolutionary theory. These worldviews are at war with biblical Christianity. They poison the church’s function of worship, make its evangelistic work meaningless, and malign the meaning of the church and its work of edification. Evolutionism is undeniably a stronghold and an argument “that exalts itself against the knowledge of God” (2 Corinthians 10:5).

Click here for the first article in the Creation and the Church series.

Click here for the second article in the Creation and the Church series.