In the view of modern culture, how could anyone be so foolish as to doubt evolution? After all, its defenders point to all kinds of examples to back their beliefs. A thoughtful look, though, at two categories of examples—past and present—reveals how far the grand story of evolution strays from reality.

First, it helps to know what the word “evolution” means to the person using it. If it merely means that certain animal traits change between generations, that’s hard to refute. But most people use the term to recap a drawn-out cosmic story of how hydrogen formed stars, stars formed planets, living cells formed on planets, and single-celled life developed into every living thing on Earth. Now, that’s tough to defend—but many still try.

Supposed examples of past evolution use circular logic. Adherents assume evolution before they conclude evolution. Take stars, for instance. How do astronomers assign “star formation rates” to galaxies? They can’t use observational science, since nobody has ever seen a star form. So, they argue like this: We see stars all across the sky. We see stars die in explosions. Billions-of-year-old galaxies should have run out of those stars that burn through their fuel in only millions of years before exploding. Therefore, some place out there must keep making stars. 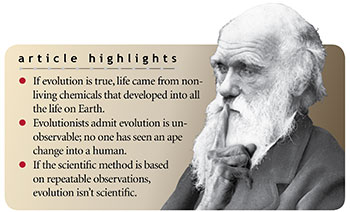 Supposed examples of past evolution use circular logic. Adherents assume evolution before they conclude evolution.

Space dust (gas) doesn’t contract into stars—it expands. Secular star formation rates hinge on the assumption of billions of years of stellar evolution, not observable science. Until experts give examples of new stars actually emerging, then our universe better fits “He made the stars also” from Genesis 1:16 than the circular logic about star formation.

Next, media, museums, and most biology textbooks use “ape-men” as examples of past evolution. But they fail to expose the fact that evolutionary experts disagree over whether each ape-man candidate belongs in human ancestry or in ape ancestry. Take the African fossil nicknamed Lucy, for example. Some experts say it became human, but others say it just became extinct. With its chimp-like size, skull, fingers, ribs, and legs, Lucy was clearly an ape. Similarly, many once taught that Java Man, one of several fossils evolutionists call Homo erectus, somehow became us. However, other evolutionists identify the Homo erectus fossil collection as just an extinct variety of humans, like the Neanderthals.

How do evolutionists get their “ape-men” amid so much dispute? They either upgrade an ape or downgrade a human. But if Lucy was clearly an ape and Java Man a human, then where’s the evolution? Extinctions of created kinds or of their varieties show no evolution—they simply reflect the Genesis 3 curse of death.

What about the supposed modern examples of evolution in action? Each reduces to variation within a stable kind. Over 150 years ago, Charles Darwin described differences between pigeons’ feathers to illustrate evolution. What do we have today? Still just pigeons. The passenger pigeon variety has gone extinct since then. So, if anything pigeons have devolved, not evolved. Yes, certain creature features can change between generations—like stripes on a zebra or zorse. None of these variations support big-picture evolution. Meanwhile, basic creature body plans, like the horse kind, remain true to their original design.

These stable kinds confirm Genesis 1:24: “God said, ‘Let the earth bring forth every living creature according to its kind.’” God equipped each kind to express variations. Animals tweak their designed traits to fit into changing settings.1 Different-looking people display God’s love for creativity.2

Nobody has shown that particles-to-people evolution happened in the past or happens today. But for those willing to see it, evidence for Genesis creation abounds.

No new stars form from gas clouds, no new humans from apes, and no new animals from pigeons or horses. Nobody has shown that particles-to-people evolution happened in the past or happens today. But for those willing to see it, evidence for Genesis creation abounds.