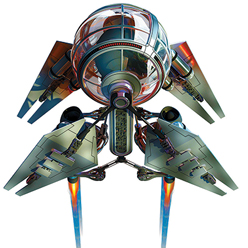 Imagine the challenges facing an engineer who’s been tasked with designing a fully automated, unmanned spacecraft that needs to travel to a planet and safely return. The vessel will be equipped with adaptable systems that can handle exposures to many uncertain conditions. Aside from heat shields and parachutes, the craft can deploy numerous external features that, if utilized, will make it look different from its liftoff appearance.

Every capability the autonomous vessel has, including the ability to relate to external conditions, will be due to its own features…and nothing else. So, the engineer needs to accurately anticipate the exposures, select adequate parameters (and add a factor of safety), specify certain external conditions to be the correct stimuli/cues, and get the design right. If the design fails, then the engineer will correct the design—not the external conditions—for the next generation of spacecraft. The precise, objective reality of engineering causality can be demanding.

The precise, objective reality of engineering causality can be demanding.

Two decades later, the craft safely returns home with great fanfare. All the adaptable features successfully deployed, and the ship looks quite different from when it left. Experts marvel at how the space environment dramatically molded this “passive” vessel as it was being driven along. Though the spacecraft performed as programmed, no credit is afforded the design team. Astoundingly, some scientists wonder what space condition caused one vital feature to emerge—and don’t even mention that the engineers specified the condition to be a stimulus and programmed the response that caused the feature to deploy. These scientists completely disregard the design and adaptive devices built into the machine and instead praise the adaptive creativity of space.

Evolutionists Invert the Cause of Adaptations

Those senseless assessments of the experts about the spacecraft are identical to the serious explanations evolutionists give for why organisms express different traits in response to changed conditions.1 But the result is the same. Misattributed causality results in incomplete research, misleading explanations, and misplaced credit. It isn’t trivial to ascribe causality for the functions of an autonomous entity to external conditions rather than its internal systems.

This is exactly what Charles Darwin did. He presented an “externalist” account of evolution, overturning all previous traditions. When organisms adapt, he granted the external environment the causal and controlling role to explain the organism’s new traits, which otherwise would look designed to suit specific environmental conditions.

When people think of evolution, what usually comes to mind is descent with modification from a universal common ancestor. Those who reject evolution generally focus on “universal” as the incorrect part. What’s normally missed is that Darwin inverted the cause for descent with modification—i.e., adaptable organisms self-adjusting over time. In doing so, he effectively targeted a distinguishing characteristic of adaptable entities, which is that the cause underlying their adapted outcome is due to their internal systems (whether spaceships or organisms) and not to external environmental forces molding them. It makes no sense to approach scientific explanations of the functions for organisms differently from those of a spacecraft unless it could be shown that they operate by different laws of nature or that their functions should be explained by different engineering principles.

What’s normally missed is that Darwin inverted the cause for descent with modification.

There is a way to cut through the confusion of Darwin’s externalism. The utilization of engineering causality may identify and correct the misconceptions in evolutionary literature just as the rocket engineer could remedy the confusion about his spacecraft.2

“There’s More to It Than the Iceberg”

A process engineering company presents one case study in causality under the heading “Loss of the Titanic—There’s more to it than the iceberg.”3 The firm specializes in identifying causality through objective methods that dig to identify hidden factors that have been overshadowed by obvious factors related to usually failed events. It uses a methodical, engineered approach to prevent snap judgments about causation that may thoughtlessly focus only on what is readily seen. Company executives hire process-engineering professionals to accurately identify causality so that harmful problems are not perpetuated.

Many people may not give much thought to the way adaptable systems truly function. With only a cursory review, there appear to be two variable parts causing the response—an organism’s obscure microscopic systems and easily seen external conditions. This may be one reason Darwin’s externalism easily took hold as the foundation for modern evolutionary biology. His contemporaries readily saw changed environments. But for decades scientists couldn’t see the molecular systems inside organisms that produce new traits.

For example, consider a headline about epigenetic changes in offspring born to starved mothers: “Famine alters metabolism for successive generations.”4 Or research papers on carp fish that automatically change size when they detect evidence of predators: “Chemical cues from piscivores [fish-eating organisms] induce a change in morphology in crucian carp,” and a few years later, “Predator-induced phenotypic changes in crucian carp are caused by chemical signals from conspecifics.”5

Even after describing a highly regulated internal mechanism that indicates that many mutations aren’t random but appear purposefully directed toward specific adaptable outcomes, a Baylor College of Medicine researcher externalistically concludes:

It’s a totally new way that the environment can have an impact on the genome to allow adaptation in response to need. It is one of the most directed processes we’ve seen yet.6

Evolutionary researchers who desire more precision than externalism affords have taken to making dual ascriptions of causality that incorporate both external conditions and internal biological mechanisms. But one scientist dubbed these causal explanations “deeply entangled.”8 A recent book meant to elucidate biological and social relationships between multiple, adaptable organisms all relating together is simply called Entangled Life.9

From 1958 to 1962, 35 million people starved to death in China.10 The results of the famine highlight an unseen multigenerational biological relationship between organisms and their environments.11 A recent study on one city in China compared the health status of residents between those who had prenatal exposure to famine and those who had not. Prenatal exposure to famine was classified as having 1) no parents exposed, 2) mother only, 3) father only, or 4) both parents.12

Research explored the potential correlation between famine exposure in parents to high blood sugar concentrations (hyperglycemia) and type 2 diabetes in their adult children or grandchildren. The odds were about 2:1 of developing hyperglycemia in both children and grandchildren of starved parents, while there was about a 75% increased risk of type 2 diabetes. The risk was highest if both parents were starved.

The researchers didn’t identify a causal mechanism. So, the Medical Xpress headline “Famine alters metabolism for successive generations” reporting on the research is erroneous.4 Linking famine exposure directly to altered metabolism bypasses the vital role of a person’s biological systems that direct all metabolic outcomes.

Epidemiologists use safeguards against the mistake, depicted as (+) exposure –> outcome.

First, a study must find a valid statistical correlation between exposure and outcome.

A second safeguard relies on engineering causality. There must be a plausible biological mechanism that explains the linkage of an exposure to the outcome. This will focus on an organism’s internal systems. This relationship is depicted as (+) exposure |—organism’s innate systems –> outcome.

The symbolism of the |— represents an organism’s boundary. This boundary has features to exclude elements of the external environment but other qualities to detect, actively transfer, or allow elements into the organism for further processing.

Mistakes in process description happen when researchers fail to report key steps—perhaps, in this case, by thinking that a parent’s exposure to malnutrition is the same exposure for a baby in-utero. These exposures are not equivalent. Malnutrition for a developing baby doesn’t start at the same time—or even necessarily happen at all—as malnutrition for the mother. For example, in pregnant women with severe iron-deficiency anemia, the baby’s iron stores and hematocrit may be normal. The placenta operates by “rules” to selectively absorb and distribute circulating nutrients to meet the baby’s needs first, then the mother’s.13

Do Parents Detect a Famine “Stimulus” and “Signal” Developing Offspring?

In humans, parents and offspring have systems to detect starvation and respond accordingly. Chinese famine researchers speculate that “genetic, epigenetic reprogramming, and subsequent gene-diet interaction are all possible explanations.”14 Aside from the mystical “gene-diet interaction,” this mechanism is like other epigenetic changes detected in offspring of starved parents.15

Recent experiments support maternal-to-offspring signals about a nutrition-deprived environment. A Duke University study on the tiny worm C. elegans found “a genetic network that mediates effects of a mother’s diet on the size and starvation resistance of her offspring,” with genes that “function in the mother to transmit information about her diet to her offspring.” The researchers add that since this network is doubtless not limited to worms, the “conserved genetic network controlling such effects of diet across generations is likely relevant to human diseases related to nutrient sensing and storage.”16

In regard to offspring born to diet-restricted mothers, study leader L. Ryan Baugh commented that “these animals are able to anticipate adverse conditions based on their mothers’ experience.” Although the report acknowledges that “the molecular mechanisms behind the buffering effects of maternal diet are still unclear,” Baugh believes that “mom somehow provisions the embryo, or programs it.”17

This theory integrates engineering causality and enables predictions of findings.

These findings tend to confirm design-based theory that emphasizes active, problem-solving, intrinsically adaptable organisms that continuously track environmental changes. If a mother is in a nutrition-deprived environment, one purpose of design-based systems is to prepare her offspring to cope with that same environment after birth. This theory integrates engineering causality and enables predictions of findings. While parents may “program” offspring through persistent epigenetic markers, another mechanism is plausible. Offspring will be shown to be able to detect signals from a parent during development (and afterward also) and make self-adjustments to their own traits per internal programming—just as a design-based, organism-focused adaptability explanation would affirm.