Engineered Chemical Could Cost Less, Save Lives | The Institute for Creation Research
Skip to main content

Three researchers from the California Institute of Technology recently made a breakthrough in developing a molecule that mimics plants’ nitrogen chemistry—processes that are needed to synthesize fertilizer in a more cost-efficient way that will also avoid disasters like the April 2013 fertilizer facility explosion in West, Texas.

They wrote in Nature, "Synthetic chemists have searched for decades for well-defined complexes that can catalyze N2 reduction to NH3."1 Contrary to most previous research, the California team found that exposing nitrogen to iron rather than to molybdenum did the trick—although they had to cool their synthetic, iron-complexed compound to -108°F and add a strong acid.1,2

The process is not yet perfected, however, and efforts to duplicate such a complex, created system may become a race to save lives.

The standard "Haber process" for synthesizing ammonium-nitrate fertilizer places nitrogen gas under very high temperatures and pressures, presenting risk for more disasters like the tragedy that devastated the town of West.

The Nature study authors described some of the trials and errors of their research as requiring adjustments to temperature, chemistry, and solvents en route to their discovery. After all that, their painstakingly derived and successful procedure still could not match the key nitrogenase enzyme’s catalytic efficiency as found in nature. 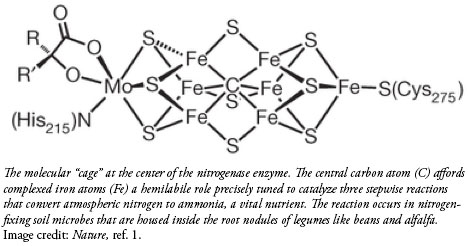 In the wild, soil micro-organisms living in symbiosis with certain plants contain the nitrogenase enzyme. This amazing relationship allows the plant to receive usable nitrogen and the microbe to receive energy from the plant. Nitrogenase expertly catalyzes the conversion of this atmospheric nitrogen to a useful form—at standard soil temperatures and normal atmospheric pressure.3 This process is so subtle that decades of research has not fully unraveled its molecule-manipulating secrets, let alone copied them.

The countless focused hours that scientists have spent chasing a basic comprehension of how nitrogenase works in plant roots clearly illustrate the ingenuity of the Master Designer who invented this phenomenal enzyme in the beginning. How incredible it is that the intention behind designs in nature can allow scientists to recreate systems that may one day save lives!