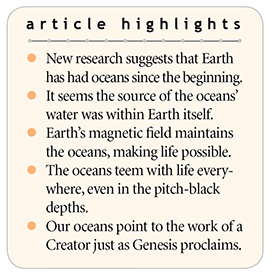 The origin of the oceans has long been a puzzle to secular scientists.1 Recently, however, progress has been made. Evolutionists are suggesting a novel idea regarding the source of Earth’s oceans—and it sounds quite biblical. In 2010, Bruce Dorminey said, “A new study suggests that Earth supplied its own water.”2 Five years later, New Scientist magazine suggested that “our planet had water from the very beginning.”3

According to Genesis, Earth began as a watery chaos about 6,000 years ago. Water was paramount on Earth from the start. “The earth was without form, and void; and darkness was upon the face of the deep. And the Spirit of God moved upon the face of the waters” (Genesis 1:2).

The design of this planet with its oceans and protective magnetic field is clearly seen (Romans 1:20). Astrobiology.com says, “The sheer strength of Earth’s magnetic field helps to maintain liquid water on our blue planet’s surface, thereby making it possible for life to thrive.”4

The apostle Paul urged the skeptics on Mars Hill that they “should turn from these useless things to the living God, who made the heaven, the earth, the sea, and all things that are in them” (Acts 14:15). Indeed, the oceans that God created and the organisms within them account for the majority of life on this planet. It’s a three-dimensional living space, and we find life all the way down to the bottom. The psalmist said in Psalm 104:24-25, “The Earth is full of Your possessions—this great and wide sea, in which are innumerable teeming things, living things both small and great.”

Even the crushing dark depths have creatures designed for such environments.

During the discovery dive [40 years ago] in the submersible vehicle Alvin, geologist Jack Corliss called up to the crew on the surface ship from his position [1.5 miles] below to ask, “Isn’t the deep ocean supposed to be like a desert?” “Yes,” was the reply. “Well, there’s all these animals down here,” he responded.5

This design aspect appears with every creature inhabiting the oceans. For example, God designed the magnificent blue whale with a heart that weighs half a ton, a tongue that weighs two tons, and calves (baby whales) that drink 100 gallons of fat-rich milk daily from their mothers’ specially designed abdominal mammary slits. How does a calf actually nurse without getting mouthfuls of seawater? Zoologists are still not sure. Evolutionists are convinced that these aquatic mammals were not created but evolved from land animals some 50 million years ago. “Looking at a great blue whale 30m long, or a fast-swimming dolphin, it is hard to imagine how they evolved from terrestrial mammal ancestors, and yet that is what happened.”6 Instead, the evidence is that God created whales as whales during the creation week thousands of years ago. Whale fossils look just like modern whales.

Viewing the oceans, we can agree with psalmist who said, “The LORD on high is mightier than the noise of many waters, than the mighty waves of the sea” (Psalm 93:4).