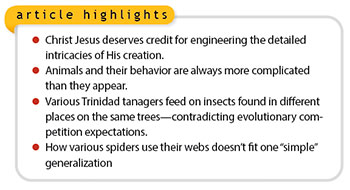 Although we cannot learn all of creation’s astounding details, the Lord enabled us to learn much of what He has done. The secret (literally “hidden”) things belong to the Lord our God, but those things which are revealed belong to us and to our children forever.1

God wants us to learn His revealed wonders beyond measure, but we must take the time necessary to see amazing details. Many of these details are exceptions to general trends.

The more details we learn about how animals live, the easier it is to recognize oversimplification fallacies—and overgeneralizations—that pervade evolutionist descriptions of animal life.

So, how do animals actually live in the real world? Animal body systems and behaviors are always more complicated than they appear. There are no such things as “simple” life forms. This point can be illustrated by something as simple as eating bugs. Birds and spiders have bug-eating habits that are not as “simple” as you might expect.

Many more examples could be given, if space permitted. Don’t believe it when an evolutionist talks about “simple” life forms—life is always much more complicated than it appears.1