Survival of the fittest has been a dominating tenet of Darwinian evolution. But a trio of colorful birds provides evidence that Darwin got it wrong when he suggested competition is the fundamental force that shapes nature. How do these birds dispute Darwin? By eating! 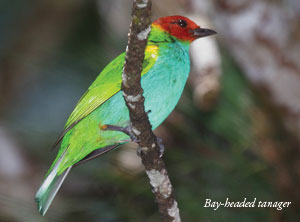 Three varieties of Trinidad tanagers share bugs on the same trees as they silently undermine natural selection survivalism. Without confrontations over resources, 1) speckled tanagers pick off bugs from tree leaves, 2) bay-headed tanagers prefer to eat bugs from under large branches, and 3) turquoise tanagers snap up bugs from twigs.1

Illustrating what ecologists call noncompetitive niche positioning, this tanager trio avoids antagonistic competition.1 To appreciate how this peaceful prey sharing upsets the presumptions of Charles Darwin, Thomas Huxley, and their modern ilk, it’s helpful to review why Darwin’s ideas were welcomed so fervently by academics who scoffed at Genesis. 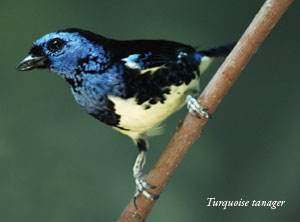 Generations before Darwin’s natural selection theory became popular, deists—people who essentially believed in a God yet rejected the Bible—like Charles Lyell and James Hutton laid the groundwork for the acceptance of evolution’s survivalism themes.

Both deists and Darwinists have misreported living conditions on Earth, yet they do so in opposite ways. Deists err on the “see no evil” extreme, underestimating the fallenness of creation.2 Darwinists, however, overemphasize “conquer or be conquered” survivalism—even nominating death as nature’s hero and means of progress instead of recognizing it as the terrible “last enemy” to be destroyed.3 Both extremes misrepresent nature. The true portrayal of nature’s condition is found in Scripture, starting in Genesis, a Mosaic book Christ endorsed (John 5:44-47).

The deists’ approach produces worthwhile observations of natural beauty, orderliness, and efficiency but fails to account for how Earth “groans” after Eden.2 What about birds that peck other birds to death while fighting over food and territory? That’s not beautiful! In the first half of the 1800s, deism failed to explain such competition, so many sought a humanistic theory that explained Earth’s uglier features—disease, deprivation, dying—without resorting to God’s revelation in Genesis.

Darwin and his followers imagined the global ecosystem as a closed fight-to-the-death arena swarming with vicious creatures scrapping for limited resources. In a one-sum game (“red in tooth and claw,”4 adopting a phrase from Tennyson to fit Darwin’s theory), gain by one competitor meant loss to another. This selfish competition was heralded as nature’s law, so explaining wildlife interactions soon required interpretations based on that brutal assumption.2

But real-world data often refuse to fit the evolutionary paradigm. Like today, uncooperative data were routinely dismissed and ignored during the 1800s and 1900s.5

Even more embarrassing to Darwin’s theory than a lack of wasteful competition is the reality of mutual aid, also called mutualistic symbiosis, where different life forms help each other, such as algae and fungus coexisting as lichen or bees pollinating the flowers from which they harvest nectar. Like noncompetitive eco-niche positioning,1 mutual aid doesn’t harmonize with Darwin’s antagonistic competition “song,” so mutual reciprocity (and self-sacrificing altruism) displays are also censured from or marginalized by science curricula.6

Even today, modern Darwinians, lauding mystical natural selection, trumpet creation’s fallenness as Earth’s foremost feature while they discard or disparage the historical documentation that God provided in Genesis regarding what triggered Earth’s fallenness.

Dissecting an Argument for the Big Bang
Secular scientists claim the universe came into existence through a cosmic explosion called the Big Bang. Some Christians try to argue that God...
BY: JAKE HEBERT, PH.D.

Rethinking Carbon-14 Dating: What Does It Really Tell U.,.
Evolutionists have long used the carbon-14, or radiocarbon, dating technique as a “hammer” to bludgeon Bible-believing Christians. A straightforward...
BY: JAKE HEBERT, PH.D.
More Creation Science Update

Half-Billion-Year-Old Fossil Brains?
Once again, a recent and remarkable fossil discovery has been made challenging evolutionary theory. A strange arthropod (i.e. a radiodont) has been found...
BY: FRANK SHERWIN, D.SC. (HON.)