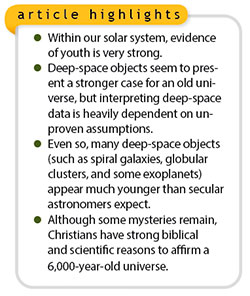 Since distant galaxies are billions of light-years away, some understandably assume that distant starlight must have taken billions of years to reach us. Also, some galaxies are colliding. While God could have certainly created galaxies in the process of colliding, it’s easy to see, given the vast distances between galaxies, how some could interpret this as evidence of great age.

However, the reality is more nuanced. The main argument for an old earth and solar system comes from radioisotope dating methods. Yet these ages are highly problematic (such as wrong dates for rocks of known age). Other than that, our solar system really does look young. Practically everywhere we look in our solar system we see strong indications of youth, including “upper limits” for ages of solar system objects that are measured in just thousands of years.1

The deep-space argument for an old universe seems stronger, but there is much we don’t know about cosmology and the universe, and such arguments often involve unproven—and in some cases, unprovable—assumptions.2 Even so, there are hints that something is wrong with the standard view. If the universe really is billions of years old and the Big Bang model is correct, then we should observe distant galaxies not as they are today but as they were billions of years ago. This means that these galaxies should appear undeveloped and “unevolved.” Yet distant galaxies routinely contradict that expectation.3 This means there is something wrong with either secular ideas of galaxy evolution or the assumption that distant starlight takes billions of years to reach us or both.

Moreover, some deep-space objects seem far younger than they should be if the universe were 13.8 billion years old. Spiral galaxies should have lost their spiral structure long ago, and secular astronomers have been repeatedly surprised by youthful features in globular clusters.4 Some exoplanets are so close to their host stars that they should no longer exist after billions of years!5

Many creationists think Einstein’s theory of relativity, which allows clocks to tick at different rates, is the key to resolving these mysteries. God might have allowed clocks in deep space to tick at much faster rates in order to let distant starlight reach us during the literal 24 hours of the creation week’s Day 4.

It is noteworthy that the strongest arguments for an old universe, such as distant starlight, involve extremely distant objects and unproven assumptions. Yet within our solar system, where we have a wealth of up-close observations, evidence for youth is both straightforward and strong. Coincidence? Or a hint that creationists have an edge when interpreting astronomical data?

Although mysteries remain, Christians have strong reasons, both biblical and scientific, to affirm that the Lord Jesus Christ created the entire universe just a few thousand years ago.