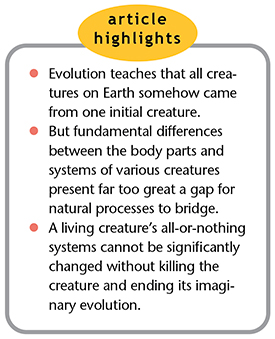 Darwinian evolution promotes a mantra that “all creatures great and small—natural processes made them all.” Just one creature somehow became all others. Textbooks reassure students that some early fish turned into today’s fish, as well as birds, turtles, and humans.

Does this match the real world? It’s one thing to simply draw a line on a paper between two animals’ pictures to express a belief that they’re related, but how can we know for sure? One test offers a hard stop to evolution between basic kinds: all-or-nothing body systems.

Body parts integrate into body systems. Each part, and each piece that makes up that part, needs the right shape, size, and strength of material to do its job. That’s why brains aren’t made of enamel but of interconnected nerves.

Some body parts can change a little and still allow the system to work. For example, human legs come short and thick or long and thin and every variety in between. But the imaginary process of transforming fish fins into human legs would leave the in-between creature either unable to swim or unable to walk. It would die, as would its evolution. Take enough of a fish’s fins away on its supposed journey to land life, and it loses its ability to track down dinner before it becomes dinner.

I have a friend who cut off his pinky finger by accident. He survives just fine with such a small change. He can no longer catch minnows out of his bait bucket with that hand, so he uses his other hand or gets help from a friend when fishing. But the changes needed to trace the supposed evolution of one of those minnows into my friend, one body part at a time, would kill the unfortunate fish. Just like man-made machines, body systems can only take so much change before they simply stop working. And body systems are vital.

At some point, nature would have to replace gills with lungs, leaving the creature unable to breathe. And that’s just one necessary body-part change. That dead fish would still have a long way to go in becoming human, including replacing its two-chambered fish heart with a four-chambered heart. Once nature added two more chambers (and how would such mutants survive?), the animal would stop pumping blood while its arteries and veins migrated out of place toward their mammal-like destinations. The list of all-or-nothing body systems gets longer the more you look for them.1

If the shift from one basic body form into another requires the loss of any vital body part even for a minute, then that shift would require a wholesale rebuild from the ground up. In other words, it would require creation. You can’t change a fish into a person—or into a clam or squid—any more than you can install 29-inch wheels on a young child’s bicycle.

Just because someone draws lines that connect pictures of paramecia, piranhas, and people doesn’t mean they evolved. Whoever makes such connections ought first to think through the insurmountable steps, like rewiring nerves, reprogramming cells, and replacing hundreds of genes. Each change that would kill the original creature—as mutations do today—represents an evolutionary impasse. How can you refute evolution? Just ask its defenders for examples of how nature rewires all-or-nothing body systems.