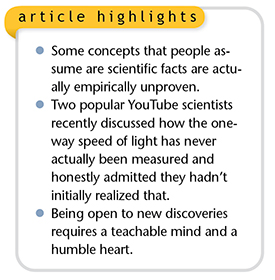 “You could see stars hundreds of light-years away, not as they looked centuries ago but exactly as they are right this instant,” says Dr. Derek Muller in a recent YouTube video about measuring the speed of light.1 Dr. Muller is a well-known science educator who has worked with Neil DeGrasse Tyson and Bill Nye and whose Veritasium YouTube channel has nearly a billion views and around eight million subscribers.

How we can see distant starlight in a universe only 6,000 years old is a primary objection to biblical creation. This video revisits the possibility that starlight might reveal the stars as they are right now—and that’s perfectly okay with known physics.

Albert Einstein reported in 1905 that the one-way speed of light cannot be determined. The relativistic nature of light travel means we could reason that light travels instantaneously in one direction and half the conventional speed of light in the other.

Dr. Muller, whose Ph.D. is in physics education research, featured this little-known quirk in his YouTube post. During the video, he called Destin Sandlin of Smarter Every Day, another top YouTube science educator. On camera, Sandlin seemed to consider for the first time the idea that measuring the speed of light requires a “round trip”—such as reflecting light off a mirror and measuring the total elapsed time. At Muller’s suggestion that we may be seeing stars as they are this instant, Sandlin replied, “This is breaking my brain.” 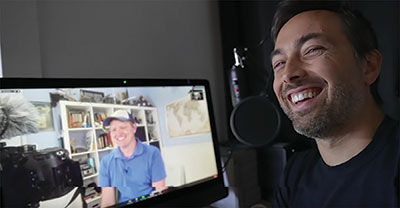 The two grappled with the topic in a humble and honest manner. It was refreshing. They appeared committed to pursuing the truth even if it meant changing their minds about a strongly held position—a conventional position they’d been taught and that most assume to be simple fact. The two examined how they arrived at a given conclusion and realized that a thing understood to be an empirically verified fact might not be.

When we understand something wrong for so long, it’s easy to respond with a defensive or dismissive attitude when our understanding is challenged. When we are wise in our own eyes and say in our hearts “I’m right” before listening to a new perspective, we can become closed-minded and miss an opportunity to grow in our understanding of the truth.

Christians who develop scientific creation models can need correction too. Our foundation of truth as revealed in Genesis is immovable, but we can hold on to incorrect ideas. Perhaps many feel the pressure to hold on to an idea for fear that admitting error would be questioning the veracity of Scripture. Quite the contrary—being corrected of an erroneous position clears away obstacles on the path to finding truth.

Genesis 1:14-15 states that God created the sun, moon, and stars to be “lights in the expanse of the heavens to give light upon the earth.” Undoubtedly, Jesus made starlight for Earth.2 God asks in Job 38:19-20, “Where is the way to the dwelling of light, and where is the place of darkness, that you may take it to its territory and that you may discern the paths to its home?” God’s question hints at the complexities of this created universe and possibly implies light’s path and home are unknowable.

Dr. Muller reflects in his video’s closing statements, “Personally, I find it fascinating that this is something about the universe that is hidden from us.”1 Many people surely agree. But one thing not hidden is the fact that the heavens declare the glory of God (Psalm 19:1).