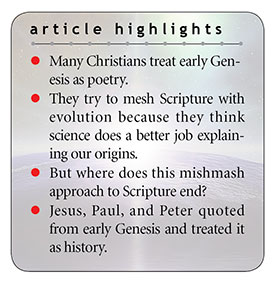 The early chapters of Genesis contradict ancient history as portrayed in public schools, television, and movies. For example, our culture insists humans evolved from ape-like creatures, while Genesis says we were made in God’s image.1 Culture says the earth formed over eons, but Genesis 1 says it took God just six days. Is it possible to believe both the Bible and evolution’s history? Many try. Some say early Genesis doesn’t convey real events and that God never intended for us to take Genesis 1–11 as history but as poetry. How well does this idea work?

We may think this approach leads to a lovely land of resolution where we can simply label controversial Scriptures “poetic” to avoid their plain meanings. Instead, opening the “Genesis is poetry” gate unleashes three terrible tigers of doubt that threaten our faith.

The first is that if we treat Genesis 1–11 as non-history, then what other passages should be labeled poetic or non-historical? The text of early Genesis doesn’t read or sound like poetry, so this idea comes from outside the Bible. The book of Psalms shows what the Bible’s poetry looks like. Historical psalms like Psalm 78 also show that even poetic passages can convey real history!

Genesis 1–11 reads like a straightforward account of real events. It uses the same tenses and tones as the rest of Genesis history, so there is no line where “poetry” leaves off and history begins. For example, Genesis 1:28 says, “Then God blessed them, and God said to them, ‘Be fruitful and multiply.’” If this is not history, then God did not actually say that. Later, Genesis 35:11 says, “Also God said to him [Jacob]: ‘I am God Almighty. Be fruitful and multiply.’” Both passages sound similar because both tell what God actually said. If we can treat one of these verses as non-history, then what stops us from treating the other verse—or the whole Bible, for that matter—as non-history?

The second doubt concerns Jesus’ truthfulness. He quoted from early Genesis when He said, “But from the beginning of the creation, God ‘made them male and female.’ ‘For this reason a man shall leave his father and mother and be joined to his wife, and the two shall become one flesh.’”2 Jesus treated Genesis 1–11 as actual history. Why would He do that if He knew it was just poetry, not meant to be taken plainly? Peter and Paul also treated Genesis as history in their letters, so why shouldn’t we? 3,4

The final tiger comes from a wrong view of science. Christians who doubt Genesis history seem to think that when a scientist says a fossil formed 70 million years ago or that a dog-like creature evolved into a whale, somehow that scientist pulled the information from the fossils or rocks. But rocks tell no such tales. Instead, they actually fit better with Genesis history. Fossils do not form today, they formed in fast-flowing, muddy water, and every continent has plenty of them. Thus, muddy water must have flowed fast over the world’s continents. Noah’s worldwide Flood as detailed in Genesis 6–9 sets up exactly the right conditions to make most of the world’s fossil-bearing rock layers. In other words, the words of most scientists do not always equate with actual, data-driven science.

Stay on the straight path that lets the whole Bible make plain sense, agrees with Jesus, and embraces real science.

A consistent approach to the Bible, respect for the truthfulness of the words of Jesus and the apostles, and a right view of the limits of science all compel us to lock the gate labeled “Genesis is poetic.” Instead, stay on the straight path that lets the whole Bible make plain sense, agrees with Jesus, and embraces real science.

Spacecraft Model Construction for Isolated Families
The European Space Agency has posted a number of do-it-yourself science activities for families homebound during the coronavirus pandemic.1...
BY: JAKE HEBERT, PH.D.
Science Teachers Violate NSTA Standards of Open Inquiry
In an editorial titled “Creeping Passivity” in the May 2007 issue of Journal of College Science Teaching, Ann Cutler, a college teacher at...
BY: PATRICIA L. NASON, PH.D.

The New State Religion: Atheism
It seems that atheism has become the official stance of America's school system. One way in which many schools and teachers are attempting to indoctrinate...
BY: JERRY BERGMAN, PH.D.
More Science in the News

Pork, Produce, and Planting for the Future
You probably have noticed over the last several weeks that your visits to the local store have demonstrated a new phenomenon—empty shelves in many...
BY: JOEL KAUTT

Cabin Fever, Cattle Egrets, and Pasture-land Partnerships
Nowadays, many folks experience “cabin fever,” but are banned from ordinary travel and social activities.1 However, some get out...
BY: JAMES J. S. JOHNSON, J.D., TH.D.

Hope for the Turtles Is Hope for Us
As Christians seek understanding and peace during a time of uncertainty, our Savior reminds us, “Which of you by worrying can add one cubit...
BY: IVANA SEMIDEY
More Science in the News