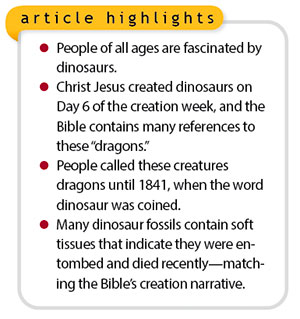 A Florida woman recently received national attention when she suggested (somewhat in jest) that a long-tailed creature captured in early morning home security footage looked like a dinosaur.1 The story reminds us that people are fascinated by these creatures. Deep down, many of us would love to see a living dinosaur—from a safe distance, of course!—and not just its fossilized skeletal remains. That dinosaurs fascinate us should not surprise us since God no doubt created these powerful animals to impress us with His power and might.

Genesis 1:24-28 teaches that God created all the land animals, along with Adam and Eve, on Day 6 of the creation week. Since dinosaurs are land animals, they too were created on Day 6. People and dinosaurs, as well as other supposedly “prehistoric” reptiles, were together on the earth from the very beginning.

Because Christ created all the animals to be vegetarians (Genesis 1:29-30), dinosaurs were originally harmless. It was only after Adam’s sin that carnivory, death, and bloodshed entered the world.2 Before the Genesis Flood, dinosaur representatives boarded Noah’s Ark, along with representatives of the other land-dwelling, air-breathing animals. Those dinosaurs not aboard the Ark perished during the Flood. We find their fossilized remains, along with those of plants and other animals, entombed within water-deposited rocks all over the world.

Ancient peoples wrote about their encounters with the descendants of the creatures that dispersed from the Ark. The word dinosaur does not appear in ancient records, or in the 1611 English King James Version of the Bible, since that word was not coined until 1841. However, the Old Testament has about 30 references to tannîm or tannînim, usually translated as “dragons.”3 Moreover, the Bible describes a monster-size marine mammal called tannîn (Lamentations 4:3, perhaps a whale) and a dragon-like marine creature called leviathan (Job 41; Psalm 104:26; Isaiah 27:1), as well as flying serpents (Isaiah 14:29, 30:6) that sound like pterosaurs. It also contains a detailed description of a giant, powerful, long-tailed vegetarian animal called behemoth (Job 40). Other ancient and some not-so-ancient historians confirmed that these creatures lived recently.4,5

Ancient peoples drew pictures of these animals, some of which are immediately recognizable as dinosaurs.4 The ICR Discovery Center for Science & Earth History showcases many depictions of these animals based on known historical artifacts from around the world.

Many dinosaur fossils contain original organic material, including skin, blood vessels, and bone collagen. Laboratory experiments, based on well-known chemistry, indicate that these delicate structures cannot survive millions of years.6 These creatures lived recently, not in an imagined Age of Dinosaurs millions of years ago.4,6

I often tell children that had Adam not sinned, they could have had a pet dinosaur. And it’s true! That some of these creatures became dangerous after the Fall and eventually went extinct are just two of many unfortunate and unforeseen consequences of Adam’s sin.

Dinosaurs are not a problem for biblical creation. The Bible makes good sense of these amazing creatures, and the Lord Jesus Christ, not personified nature, deserves the credit and glory for creating them.