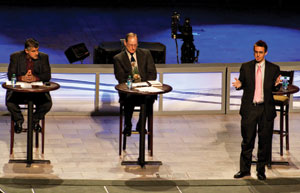 Students from Prestonwood Christian Academy and other area Christian schools got to participate last November in a creation science panel discussion as part of the school’s annual Biblical Worldview Institute.

“We hold the Biblical Worldview Institute every year for our students, and then we invite other members from the community,” said Dan Panetti, PCA’s biblical worldview director. “Other schools have started coming to it, and so has our faculty.”

The event, which took place on November 17, 2011, included speakers from the young earth, old earth, and theistic evolution perspectives. About 2,000 attendees from six or seven Christian schools came to the conference this year, including ones from Texas, Louisiana, and Oklahoma. The year before, when the panel discussion featured renowned atheist Christopher Hitchens, about 20 schools attended, including ones from North Carolina, Tennessee, and New Mexico.

The primary issues covered this year were the age of the earth, the fossil record, and the age of humanity. Cell and developmental biologist Nathaniel Jeanson from the Institute for Creation Research presented for the young earth perspective.

“I am very encouraged about the state of the young earth creation science movement after participating in the panel discussion at Prestonwood,” Dr. Jeanson said. “I was pleased with how defensible the young earth position is. Nearly all the arguments made for an old universe and old earth were predictable, and all were easily diffusible.”

The panel discussion took place from 8:30 to 11:00 a.m. and featured talks by each of the presenters, as well as a 30-minute Q&A session with questions from both facilitators and the audience.

At the end of the presentation, the students had lunch and then attended an advisory period, in which groups of ten students and an advisor discussed some questions prompted by the experts.

“We try to raise a bunch of questions and not just answer them,” Mr. Panetti said. “Our priority is just to raise the questions and put this on their radar so that the students can start hearing the information and asking intelligent questions.”

“During the question and answer time, the students themselves challenged the old earth position with the positive data for the Flood that I presented,” Dr. Jeanson said. “Overall, I think the audience left knowing that the young earth and global Flood views are very well supported by the observable scientific evidence.”

The information stayed with the students, Mr. Panetti said, even after a long holiday.

“[The students] were interested in the speakers and what they had to say,” he said. “But they were also interested in finding out more information on their own afterwards. And that was the big takeaway for us—that the kids were still talking about this days and even weeks later as they came back after the Thanksgiving break.”

“So, it’s been good because [the panel discussion] raised a greater level of awareness,” he said. “And our main priority is getting our students to think about these things and to think critically.”