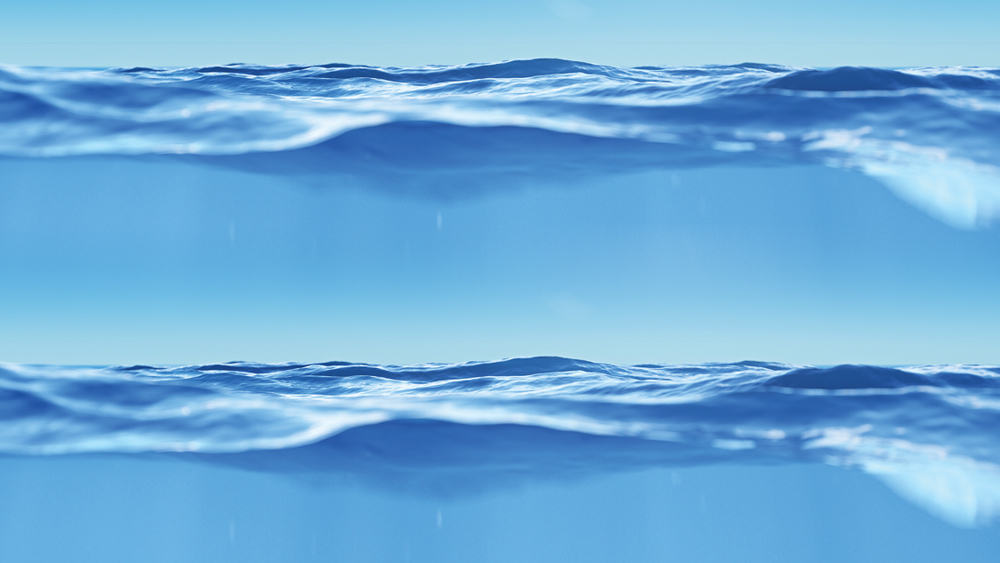 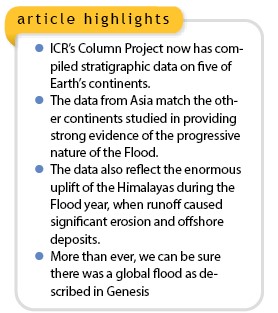 The Institute for Creation Research’s Column Project team recently finished a two-year study of Asia. We have now accumulated column data across five of the world’s continents, with Australia in progress and Antarctica in the future. Our results reinforce earlier findings of a progressive global flood (Figure 1).1-3

We compiled a total of 784 stratigraphic columns across the Asian continent and surrounding offshore regions. The columns were derived directly from oil industry wells, published cross-sections, surface outcrops, and seismic data. Maps of the surface extent and thicknesses by megasequence are shown in Figure 2. A graph of the percent surface area to total area for each megasequence is shown in Figure 3.

The maps and the graph show that Asia follows the same general patterns of North and South America, Africa, and Europe.2 Similar patterns on every continent are strong evidence of the progressive nature of the global Flood. 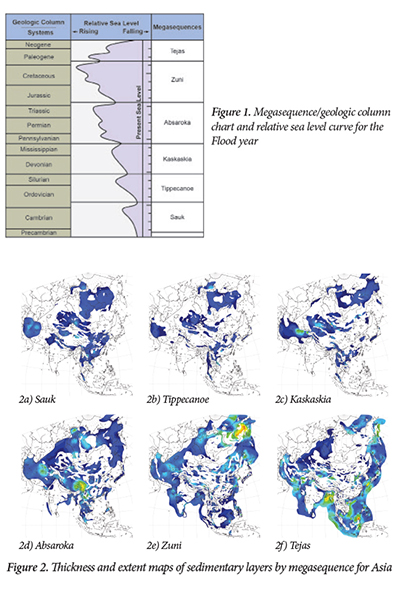 Asia Peaks in the Tejas

The first three megasequences (Sauk, Tippecanoe, and Kaskaskia) across Asia show the least surface coverage (20 to 30%) and generally stack on top of one another (Figure 3). This is also what we observed across the other four continents.2 These areas likely represent pre-Flood shallow seas surrounding the continents, possibly delineating the extent of the Flood through the first 40 days.4 The Absaroka Megasequence shows a sharp increase in surface coverage to 49%, followed by substantially more coverage in the Zuni (56%) and the Tejas (58%) (Figure 3). 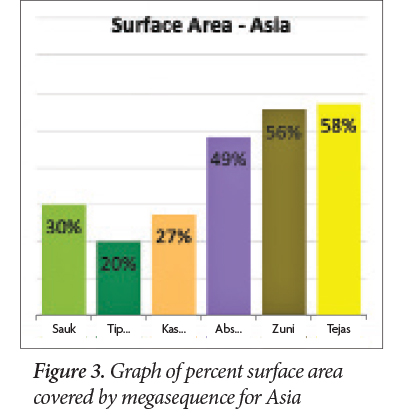 In our earlier reports, we found that the surface area and the sediment volumes generally both peaked in the Zuni.1,2,4 When we add Asia to the other four continents (Figures 5 and 6), we see that the global total surface coverage still peaks in the Zuni. We believe this denotes the high point of the Flood on Day 150 (Genesis 7:24).

Prior to our study of Asia, the peak in volume was in the Zuni at 35% of the total volume deposited. Adding Asia to the mix shifts the peak for the largest amount of global sediment volume to the Tejas. In fact, we find that 36% of the total volume of sediment deposited in the Flood year was during the Tejas—more than any other megasequence (Figure 6). The Zuni is now second at 30%. Recall, the Tejas comprises the bulk of the Cenozoic (Tertiary) sediments prior to the Ice Age and is considered to be the receding phase of the Flood.4 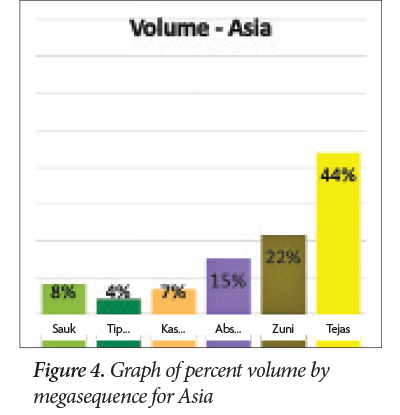 Why is the Tejas thicker in and around Asia? Substantial catastrophic tectonic plate movement was still occurring during the post-Zuni receding phase of the Flood. In fact, over one-third of today’s ocean crust formed during the Tejas.4 Part of this plate movement involved the collision of the subcontinent of India with Asia. This occurred midway through the Tejas, creating the Himalayan Mountains and tremendous uplift across central Asia.

Because this occurred during the runoff phase, it caused immense erosion of the uplifted regions. These eroded materials were transported offshore as the receding phase continued to drain water off the land. Note the yellow areas in the Bay of Bengal and the offshore regions surrounding Southeast Asia and China in Figure 2f. These are the thickest deposits of Tejas sediment. 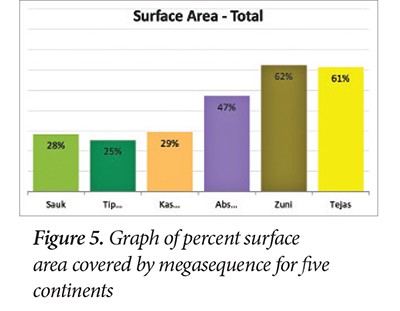 The enormous uplift and erosion that took place in southern Asia late in the Flood year appear to be the driving force that generated the increased offshore Tejas sediment, so much so that it altered the world totals (Figure 6). We still think, though, that the high point of the Flood (Day 150) was most likely near the end of the Zuni Megasequence since it covers the maximum surface area (Figure 5).4

The tremendous amount of tectonic plate motion during the Tejas, the volume of sediment transported offshore, and the offshore Tejas coal beds5 all independently support a high Flood/post-Flood boundary. We maintain that the best location for the boundary is at the top of the Tejas, the N-Q boundary (Neogene-Quaternary), just below the Ice Age sediments (Figure 1).4 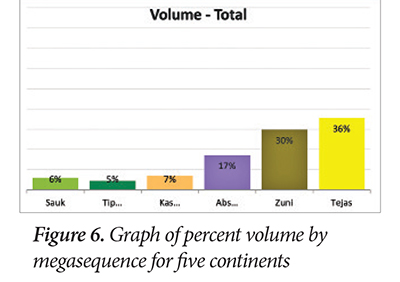 The stratigraphy across Asia and the other four continents demonstrates the progressive nature of the global Flood. All of the continents studied so far begin with minimal flooding followed by marked increases in surface area coverage and sediment volume.

Our interpretation is confirmed that the first three megasequences (Sauk, Tippecanoe, and Kaskaskia) represent the first 40 or so days of the Flood, and the Absaroka and Zuni the next 110 days of the rising Flood.4 In addition, the Tejas is verified as the receding phase, deposited during Days 150 to 314 of the Flood year.4

After examining the rock record across five continents, we can now be more assured than ever that there was a global flood as described in Genesis. The rocks don’t lie!

*  Dr. Clarey is Research Scientist at the Institute for Creation Research and earned his Ph.D. in geology from Western Michigan University.

NEWS
Stars Defy Big Bang
Recent measurements by astronomers at the University of Cologne (Germany) and Masaryk University (Brno, or the Czech Republic) have shown that a fast-moving...
BY: JAKE HEBERT, PH.D.
Shop Related Products
$