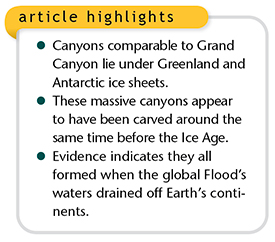 Two newly discovered canyons in Greenland and Antarctica have a lot in common with Grand Canyon. Both canyons are as deep as or deeper than Grand Canyon and are at least 60 miles in length. But what’s especially revealing is the fact that they all appear to have formed around the same time.

Grand Canyon is 277 miles long and about a mile deep in many places. Secular scientists claim it started to form just prior to the Pliocene, part of the Neogene system or Late Cenozoic erathem. The Late Cenozoic date for the canyon is confirmed by about 150 Ice Age lava flows that poured down Grand Canyon’s carved walls, demonstrating that the canyon existed prior to or very early in the Ice Age.1

Petermann canyon, Greenland’s largest subglacial feature, is as deep as Grand Canyon and about 450 miles long. This canyon wasn’t formed by the scouring of the current ice sheet but by catastrophic waterflow beginning in the Pliocene prior to the Pleistocene Ice Age.2

The likewise massive Denman Canyon in Antarctica is 62 miles long and twice as deep as Grand Canyon.3 Secular scientists speculate that it formed as continental ice poured off the eastern edge of Antarctica. However, it’s more likely this canyon had its origins in the Late Pliocene. Like many glacial canyons, the ice sheet probably scoured out an earlier water drainage system. 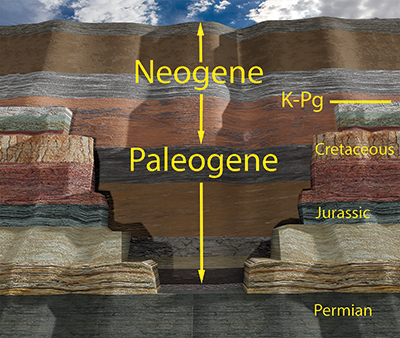 Figure 1. Diagram illustrating a large fictional canyon that formed at the end of the Cretaceous (K-Pg boundary). This canyon would most likely have been filled by later sedimentary rocks of the Paleogene and Neogene. However, we do not observe major canyons originating at this level in the rock record, or at any time earlier for that matter. We only see major canyon development originating in the Neogene (near the N-Q boundary) from Flood runoff.
Image credit: Scott Arledge

All three of these major canyons appear to have formed about the same time, just prior to the Ice Age. And we could add the second-largest canyon in North America, Palo Duro Canyon, to this list since it also had its origin around then.4

If uniformitarianism is true, why aren’t there countless similar-size canyons throughout the rock record? There should be massive canyons mixed in at all levels of the geologic column, not just near the top. And these should be filled to the brim with later sedimentary deposits (Figure 1). And yet, the majority of the rock record reveals nothing on the scale of the canyon erosion that’s observed in the Late Cenozoic.5 All of the world’s largest canyons seem to have formed simultaneously just before the Ice Age. It’s as if massive canyons didn’t exist prior to the Late Cenozoic.

Furthermore, if the post-Flood boundary is located at the K-Pg (Cretaceous-Paleogene), we should also observe numerous massive canyons originating at that level in the rock record. But we don’t. The only time we see large-scale canyon erosion is just before the Ice Age, at the end of the Neogene system. That’s another reason Institute for Creation Research scientists place the Flood/post-Flood boundary near the N-Q (Neogene-Quaternary)—it best fits all of the geological and paleontological data.5,6 The K-Pg is likely just the high-water level of the Flood around Day 150 when the whole earth was inundated.5

Only the receding phase of the Flood provides the conditions necessary to carve massive canyons all over the world at the same time, as I illustrated for Grand Canyon in a previous article.7 Because it was a one-time event, the Flood also explains the lack of countless erosional canyons originating within rocks prior to the Late Cenozoic. The sheer volume of water that drained off the continents at the end of the Flood provides the perfect recipe to carve all of these canyons in a matter of months.