Some rocket cars can accelerate at 5 g-forces.1 For comparison, respectable acceleration for a sports car amounts to half a "g," and people faint when accelerating at 5g's. But long before the rocket car was invented, fish were accelerating just as forcefully into the mouths of giant salamanders. How did these thin-skinned amphibians acquire rocket-force mouthparts?

A team of researchers from Austria investigated the biomechanics of suction feeding and measured the maximum acceleration of a fish as it traveled into a Chinese Giant Salamander's mouth. These river monsters, including the species Andrias davidianus, can exceed five feet in length. Their numbers are steadily declining, so we better study them now since future generations might not get the chance.2

The Journal of the Royal Society Interface published the new results.3 Moving their fast food at 40-50 m/s2, or between 4 and 5g's, these salamander's suckers impress.

The study authors learned that the salamander "suction feeding" setup depends on a precise collection of coordinated body parts, behaviors, and timing. For example, the wide shape of its mouth works with a mouth floor that is solid on the downstroke, but flexible on the upstroke. Its "well-developed pair of mandibular depressor muscles," and "massively developed epaxialis musculature" contract to generate rocket-car like suction power.3

Though the authors expected the floor of its mouth to be built of rigid bone like other salamanders, fish, seals, and dolphins that also use suction-feeding techniques, they instead found tough but flexible cartilage. The mouth floor always drops only after the meal is completely inside, 50 milliseconds (!) after its mouth begins to open. This movement expands the mouth's volume at just the right time to accommodate the water that flows in with its food, contributing to its smooth and powerful mouth motions. 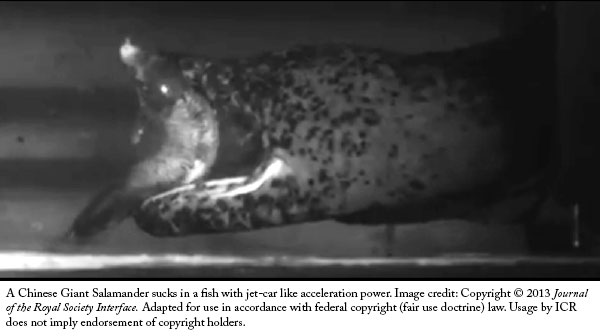 Instead of drawing logical inferences about the past from salamander biology, these investigators resorted to raw evolutionary storytelling. Clearly, rocket-car design never occurs by accidental, natural processes, so even more highly sophisticated rocket-like mouth design wouldn't occur that way either.

Sound reason didn't deter the salamander authors' nature-only approach to origins. They wrote, "We hypothesize that the function of the hyobranchial [suction-feeding mouth] system, as described here for A. davidianus, has shifted during evolution." How did it shift? Supposedly, the "primitive" solid mouth floor that once played "a dominant role in producing suction pressure" was released of its former duties in order to morph from bone to cartilage and take on the new—but equally critical—role in giant salamanders of accommodating water wash-in when feeding.3

This Darwinian story ignores the fact that any imaginary "in-between" mouth structure would be too flexible to create enough suction using the "primitive" way, but too rigid to work in the salamander's present setup. How would the supposed transitional creature have survived without the ability to eat? The study authors glossed over the details of their origins proposal, content to toss magic phraseology at the problems.

So far, the most scientifically responsible answer to the question of salamander suction origins is a purposeful creation by God. All agree that good observational science has always undergirded rocket technology. And good historical science leads to the conclusion that a purposeful Person likewise built rocket-like mouth suction.

Miniature Horse Poised to Break Record
The Guinness Book of World Records is renowned for its collection of odd feats and extraordinary measurements. One of its entries may someday be a young...
BY: BRIAN THOMAS, PH.D.
More Creation Science Update

"Stone Age" Surgery
The creation model states that humans were created by God about six thousand years ago—as opposed to evolution that says we came from apes over millions...
BY: FRANK SHERWIN, D.SC. (HON.)

Supersaurus-Sized Dinosaur No Match for the Flood
Scientists are still trying to out-do each another by finding the biggest dinosaur. Brian Curtice, from the Arizona Museum of Natural History, recently...
BY: TIM CLAREY, PH.D.
The Latest
NEWS   ACTS & FACTS   PODCASTS