Researchers are calling an ancient ruin near Provadia in Bulgaria Europe's oldest town.1 Its carbon age between 4700 and 4200 B.C. predates the accepted calendar age of ancient Greece by about 1,500 years.2 Investigators have uncovered enough clues from the intriguing site to attempt reconstructing the lives of its ancient inhabitants, but it appears that they left out a key conclusion.

The walls were very tall and made of stone blocks. It contained two-story houses, gates, and bastion structures. The town was a religious center, with pits used for rituals, and its main industry was salt production. The city's ancient inhabitants processed and sold salt from a nearby deposit that still yields salt today. And that salt made them rich.

An ancient burial ground 21 miles away from the ruins, near the seaside city of Varna, held the world's oldest hoard of gold objects, accidentally discovered in 1972. Both the graves in Varna and the small necropolis found this year at Provadia feature human remains with clay vessels and other objects. 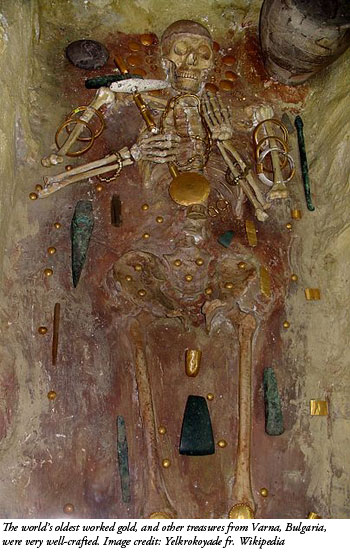 Vasil Nikolov of the National Institute of Archaeology in Bulgaria told the AFP, "At a time when people did not know the wheel and cart, these people hauled huge rocks and built massive walls."1 But how does anyone know that they did not know the wheel? Maybe they had wheels and carts made of materials that did not last for thousands of years, or maybe they did not bury their wheels.

An absence of wheels from an ancient site does not mean they did not have wheels back then. The inhabitants of Europe's oldest town certainly made circle-shaped jewelry and round pottery, so making a wheel would not have been difficult for them.

This culture was complete, having religion, burial, commerce, construction, and art. There is no hint here of the "pre-wheel" time that evolutionists imagine. Both the world's oldest gold hoard and Europe's oldest town reflect the veracity of the world's oldest recorded history, as transmitted in the Bible. In its first appearance on the continent, mankind appears just as fully human as living Europeans.

Image credit: Copyright © 2012 The ABC. Adapted for use in accordance with federal copyright (fair use doctrine) law. Usage by ICR does not imply endorsement of copyright holders.