Two years ago it was reported that polonium (Po) radiohalos were still "a very tiny mystery."1 Since then, extensive research into the geological occurrence and distribution of Po, uranium (U) and thorium (Th) radiohalos has been undertaken as part of the RATE project,2 so now there are some preliminary results to report that are both significant and exciting.

Radiohalos are minute spherical zones of discoloration surrounding tiny mineral crystals included in larger host mineral grains in certain rocks, particularly granites. Alpha-particles produced by radioactive decay of U, Th, and their decay products (including Po) in the tiny mineral inclusions (often zircons) penetrate the surrounding host minerals (often the dark mica, biotite) damaging their crystal lattices. Because the a-particles emitted by the different radionuclides in the U and Th decay chains have different energies, they travel different distances. Where the a-particles stop they do the most damage, resulting in spherical shells of intense discoloration, which are concentric ring structures when the rocks are studied in thin (cross) sections. Therefore, it is possible to identify which radionuclides were responsible for producing the observed radiohalos. 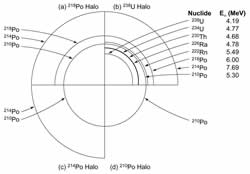 There are three Po radionuclides in the 238U decay chain—218Po, 214Po and 210Po. All decay very rapidly and so have very short half-lives—3.1 minutes, 164 micro-seconds and 138 days respectively. Thus the occurrence in granitic rocks of 218Po, 214Po, and 210Po radiohalos, exhibiting only the rings produced by these Po radionuclides because only these respective radionuclides were present in the radiocenters when the radiohalos formed (figure 1), has been interpreted as indicating instantaneous formation of both the Po radiohalos and the granitic rocks.3 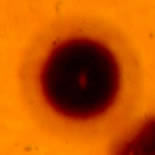 The initial focus of the research has been granitic rocks that had to have formed during the Flood year. In each case there is unequivocal evidence that the granitic rocks formed by the melting during metamorphism (changes in rocks induced by heat and pressure) of fossiliferous Flood-deposited sedimentary layers, and that the resultant granitic magmas (melted rocks) then intruded into other Flood-deposited layers. Such Flood-related granitic rocks investigated thus far include the Stone Mountain granite near Atlanta (Georgia), the La Posta zoned granodiorite and related granites in the Peninsular Ranges of southern California east of San Diego, and the Cooma granodiorite and four other granitic bodies in southeastern Australia.

U Radiohalos and Accelerated Decay

Furthermore, such accelerated radioactive decay would have generated a large pulse of heat during the Flood. This in turn would have helped to initiate and drive the global tectonic processes that operated during the Flood year, and to accomplish catastrophically much geologic work, including the regional metamorphism of sedimentary strata and the melting of crustal and mantle rocks to produce granitic and other magmas.

However, the Po radiohalos are also still highly significant, due to their exceedingly short half-lives. Because these granitic rocks containing them are neither created nor primordial, the Po that parented these Po radiohalos cannot have been primordial.6 Whatever secondary processes were thus responsible for separating the necessary Po from its parent U and concentrating it into the radiocenters, the timescale involved had to be very short.

Limited space here precludes a full technical explanation and detailed justification of a proposed mechanism for Po radiohalo formation, but a comprehensive paper is being prepared for presentation at next summer's International Conference on Creationism.7 In summary, many related lines of evidence suggest a viable hydrothermal (hot water) fluid transport model in which the immediate precursors to the Po isotopes, probably accompanied by the Po isotopes themselves, were carried exceedingly short distances within the biotite flakes from U decay in adjacent enclosed zircon grains. The Po isotopes were then continuously concentrated in appropriate radiocenters by attractive ions in lattice defects within the biotite flakes, and the Po radiohalos then formed.

Perhaps the Po radiohalos are no longer "a very tiny mystery." If so, the U, Th, and Po radiohalos are potentially powerful evidence of the catastrophic geologic processes within the Flood year on a young Earth. Investigations are continuing on Flood-related granites; other investigations are now going to include pre-Flood granitic rocks that might extend this evidence even back into the Creation Week.

* At time of publication, Dr. Snelling was Professor of Geology for the ICR Graduate School.

CREATION PODCAST
The Secrets of the Cell | The Creation Podcast: Episode 29
Cells are the basic organisms of life and in some groups they are organisms. What is a cell? What goes on inside of a cell? Did all life come from a...
BY: STAFF WRITER