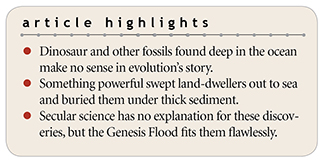 Oil and gas explorations have found sedimentary deposits so massive and so far offshore that secular science has no satisfactory explanation for their occurrence.1 Marine rock exposures have also revealed numerous land fossils washed great distances out to sea.2,3 Drilling off the coast of Norway has even pulled up a core containing dinosaur bone.4 Although these discoveries baffle uniformitarian scientists, they are not an issue for Flood geologists.

Mystery of the North Sea Dinosaur

Offshore drilling in the North Sea near Norway has resulted in cores containing bone fragments from marine reptiles such as plesiosaurs or ichthyosaurs, marine monsters that one would expect to find in the muddy depths of oceanic waters. But would you expect any recognizable bone fragments from a dinosaur—a land dweller by definition—about one-and-a-half miles deep and over 70 miles away from shore? What scenario could explain that occurrence?

The bone slice [of what appears to be a Plateosaurus] was discovered during the description of a core retrieved in February 1997 from well 34/4-9S in the north-western part of the Snorre Field….It occurs in a reddish-brown, mudstone…composed of dominantly compound and cumulative paleosols that formed in distal to fluvial channels in a flood-plain forming the uppermost part of the upper member of the Lunde Formation….The paleosols are characterized by carbonate nodules, pedogenic mud aggregates and slickensides, mottling, root traces and mud cracks.…The presence of root traces suggests that the flood-plain was covered with small trees and bushes, vegetation suitable for herbivorous animals living on the alluvial plain.5 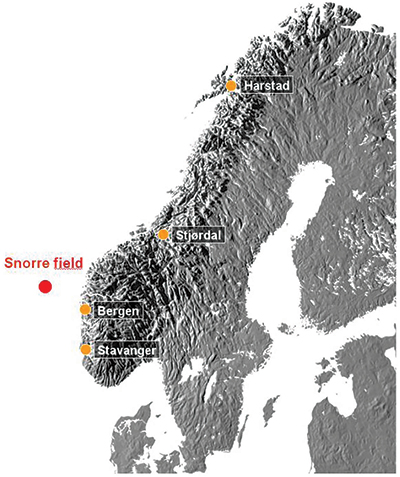 Map of the Snorre Field in the Norwegian North Sea.
Image credit: Copyright © 2016 Dag Chun Standnes. Used in accordance with federal copyright (fair use doctrine) law. Usage by ICR does not imply endorsement of copyright holder.

Based upon comparative studies of fibro-lamellar “longbone” tissue—especially the radial fibro-lamellar tissue, which appears to be from the metaphyseal (narrow portion) region of the bone rather than the middle of the bone shaft—birds and mammals were eliminated as providers of the bone found in the offshore core. Comparative histology analysis indicates this find as being from a Plateosaurus, a terrestrial dinosaur that resembled a quadruped sauropod but with hind legs much larger than the forelimbs so that bipedal locomotion was likely. Analysis of Plateosaurus footprints elsewhere show that it sometimes walked on all fours and at other times on its much larger hind feet.

This find indicates the Plateosaurus was washed way out into oceanic waters and quickly buried in sediment slurry in what became offshore mudstone more than a mile-and-a-half deep.

With an approximate width of 400 kms between present mainland Norway and the Shetland Platform…[this Lunde Formation part of the Norwegian North Sea] was flooded during a marine transgression from the north and south.6

The tsunami-like wave that explosively scour-blasted the Plateosaurus out into the ocean was catastrophically powerful! How else would this dinosaur or any land animal get washed so far out to sea and buried deeply enough to escape ordinary disintegration?

Similar tsunami-like waves may have also crashed across Svalbard’s main island, Spitsbergen—over 400 miles north of Norway—rapidly burying ornithopod (duck-billed) and theropod (meat-eating) dinosaur footprints there and preserving them from erosion.7 Massive waves must have transported sediment much farther than most secular scientists readily admit. These trace fossils show us dinosaurs were likely living at high latitudes in the pre-Flood world.

Enigma of the Whopper Sand

There are other examples of terrestrial materials found in unexpected offshore locations. Consider the large sand and mud formations found at the mouths of major river systems, such as where the Mississippi River dumps into the Gulf of Mexico. How far from shore should we expect to find river-driven sand? The standard expectation is that it wouldn’t get very far since the water energy drops off too quickly.

So in 2001, geologists were shocked to find the Whopper Sand, an enormous petroleum-bearing formation in the Gulf of Mexico’s deep-sea sediments.1 Powerful water motion was needed to deposit this sand about 200 miles offshore, a situation that baffles uniformitarian thinkers but doesn’t mystify creationists.

No one should be surprised when geological data match the biblical record of the Genesis Flood, because true science corroborates Scripture. In one case [i.e., the Whopper Sand], creationist geology not only supports facts reported in Genesis, it [also] explains why petroleum companies delayed finding billions of barrels of oil, because they erringly assumed uniformitarian ideas about where to look for this deep-sea treasure.8

Before Day 150 of the Flood year, tsunami-like waves moved inland across the continents, covering them with repeated layers of sedimentary sheet washings. From the end of Day 150, the Flood’s mid-point, a remarkable reversal (“return”) occurred, followed by continual widespread and powerful drainage dynamics.

That pivotal reversal left its marks all over the world’s stratigraphic rock layers. One example is “a large, unusually thick and extensive sand body in the deep water of the Gulf of Mexico [7,600–10,000 feet deep]…so large and completely unexpected that the oil industry dubbed it the ‘Whopper Sand.’”9

The Whopper Sand was deposited when floodwaters shifted direction and suddenly began to drain off the North American continent into the Gulf of Mexico. This shift occurred at the Zuni/Tejas (K-Pg) boundary and is marked by the sudden change in sediment type between the uppermost Zuni layer and the lowermost Tejas. In a Flood model, this rapid shift from clay deposition to sand deposition coincides with the reversal in water direction described after Day 150.

The initial drainage rates seem to have been very energetic and extremely high in volume. They coincided with a rapid drop in sea level at the beginning of the Tejas Megasequence, which may have been the mechanism that transported the thick Whopper Sand so far from shore. As the floodwaters continued to drain off North America, the volume of water decreased, slowing the transport of sediment until the modern-day pattern of clay-dominated deposition was reached.

The Whopper Sand surprised secular geologists because their uniformitarian assumptions would never have led them to look for it so deep in the Gulf of Mexico.

If this is a post-Flood deposit, what local catastrophe can explain this massive sand unit?…[T]he size and scale of the Whopper Sand is beyond any deposit like it in the world. The erosive power to produce this much sand and to transport it so far would have likely affected most of the contiguous [lower 48] USA…making it nearly impossible for animal and human survival. As described above, the best explanation for the Whopper Sand is at the onset of the receding water phase of the Flood.9

A new discovery in Europe has again sent shockwaves through the paleontological world. Several phytosaurs, a group of crocodile-like reptiles found globally in Triassic strata, were excavated from a presumed marine environment.

Phytosaurs had feet and claws like modern crocodiles, not flippers as do marine reptiles like plesiosaurs. Paleontologists identified at least four individual fossil phytosaurs in the Dachstein Limestone of Austria that were each about 13 feet long and still actively growing at the time of their deaths. The scientists estimated the reptiles were about eight years old when buried, based on bone tissue studies.10

But this wasn’t the first claim of marine-encased phytosaurs. Several other occurrences of these terrestrial animals have been identified in marine rocks in Italy, Germany, China, and even possibly England.10

The phytosaur is a semiaquatic reptile whose remains are usually found near freshwater lakes and rivers….However, these particular fossils were found in sediments from an ancient ocean environment [limestone bed with marine fossils], tens of miles from the Triassic shoreline.11

How do land-dwelling animals end up in an ocean environment and in ocean sediments? The scientists themselves found no evidence other than their occurrence in marine rocks.

Clear skeletal adaptations to a marine habitat are not evident in Mystriosuchus steinbergeri sp. nov. [the species found], but may reflect the highly limited available postcranial [body fossils] material.10

Finding phytosaurs in marine rocks in Austria and elsewhere is clear evidence of massive, high-energy transport. Tsunami-like waves, generated by large earthquakes during the Flood, could easily have swept land-dwelling animals out to the deep sea, miles from the original coastline.

The phytosaurs most likely lived in an ecologically zoned pre-Flood world.11 Coastal environments were probably full of these crocodile-like creatures. As the Flood’s water levels increased during the Absaroka Megasequence (which included the Triassic), the phytosaurs were evidently washed out to sea as the turbulent waters receded.

The Absaroka (Pennsylvanian-Lower Jurassic) is the level of the Flood when the first major coal seams show up in the rock record and the first major occurrences of land animals also appear.12 It’s no coincidence that land animals and plants show up simultaneously at the same level globally as these coastal swamps were being flooded by the advancing Flood. In a Flood model, we should not be surprised to find land animals washed great distances out to sea as a consequence.

We’re talking about unimaginable amounts of energy—greater than any tsunami witnessed in modern times. These features are difficult to comprehend without recognizing a catastrophe as big as the great global Flood described in Genesis. There is no other conceivable explanation that fits the observable facts. It was a terrible day at the beach when the doomed Plateosaurus was washed out to sea and buried in sediments far off the coast of modern Norway.

And it was a terrible thing for Earth’s people who did not heed Noah’s warnings that God was going to send a flood to judge them for their wickedness. We can thank God that Noah and his family believed, obeyed, and were saved.